December, resting at Rainbow Rock, Rhins of Galloway, after an exciting trip round the Mull!

The seakayakphoto.com December desktop wallpaper calendar (in a variety of screen resolutions) is available for download here.
Posted by Douglas Wilcox at 5:31 pm 2 comments:

We paddled off into the sunset in Loch Linnhe. 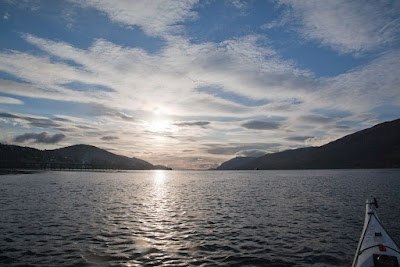 The River Lochy discharged us into Loch Linnhe, which stretched away to the SW and the distant Corran Narrows. 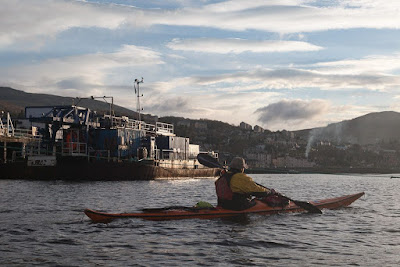 We soon came to Fort William, Scotland's outdoor capital. The town is not just a tourist centre it is also an unpretentious working place and so is not, perhaps, one of the most scenic of coastal towns.  It is hemmed in to a narrow ribbon of land by Loch Linnhe on one side and Ben Nevis on the other. The only space to build the town bypass was along the shore, the town shows its "derrière à la mer" as they say further south. To be fair, when they built the bypass, they did not demolish a curving street of "but and bens", nestling round a silver strand with peat smoke curling into the still highland air from their lums. Rather the bypass was built where the railway used to run! Neither is the town pier a tourist attraction. There was no funfair at the end of this long pier, only some heavy barges. 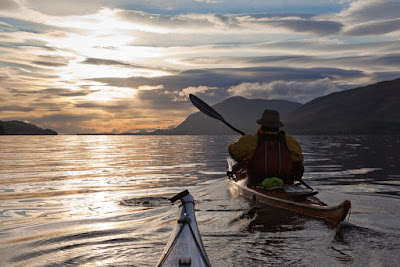 We left Fort William and set off down Loch Linnhe... 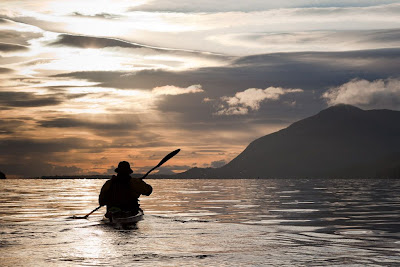 ...it was a glorious winter evening as we... 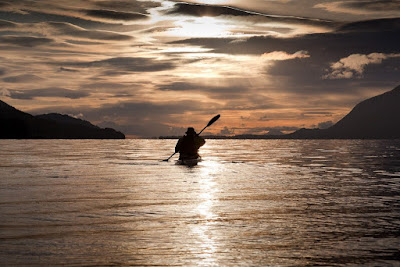 ...paddled off into the sunset.
Posted by Douglas Wilcox at 7:00 am No comments: