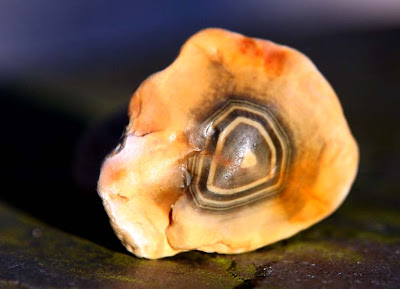 This banded agate was found on the south Ayrshire coast under the cliffs on which Culzean Castle stands. Agates form as nodules within cooling lava. As the lava weathers the nodules are released and get broken open by wave action. They are also found on Ayrshire's raised beaches which are used to grow Ayrshire potatoes. Hunters of the semi precious stones will often follow the tractors which plough the fields.
Posted by Douglas Wilcox at 10:08 pm No comments: