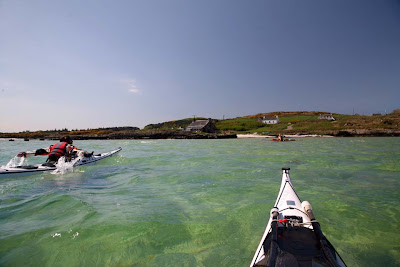 It was hot, thirsty work crossing the Sound of Gigha. Feeling quite parched, we speeded up as we approached a promising looking beach with a stone building just behind. 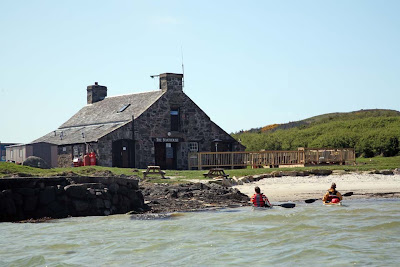 As we neared, we saw through salt rimmed and reddened eyes that it was called "The Boathouse". Readers will hopefully appreciate the unstinting efforts of the seakayakphoto staff in bringing to these pages, reports of oases of refreshment, which are hidden away in the remoteness of these scattered isles, that form the extreme edge of the great Eurasian landmass. Staff are now experienced enough to know that buildings with names warrant further investigation...... 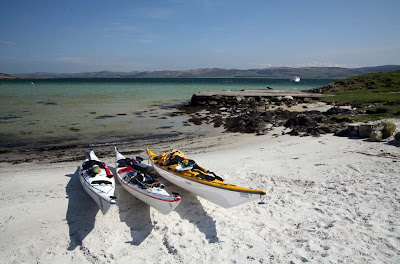 An idyllic landing spot just 30 metres from the portal of the boathouse. 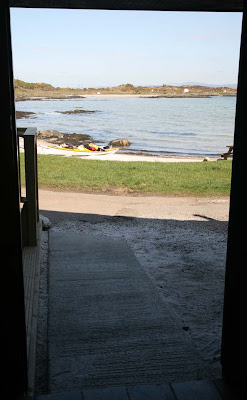 The kayaks are framed by the door of a very conveniently located sea kayaking hostelry. Indeed, such is the convenience of this establishment, should global warming raise the seas even a little, waterproof boots might be essential wear for those requiring a libation. 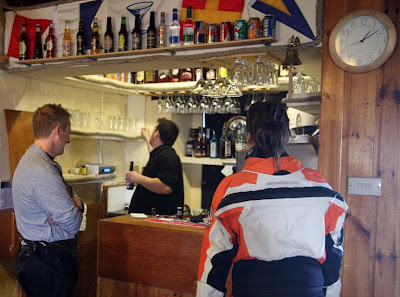 In the meantime, sea kayaking apparel caused not a batting of an eyelid. There was a little disappointment to find no draft beers but there was an excellent selection of bottled beers from Scotland, England, Ireland, Denmark, Germany, Spain, Czech Republic, USA and Estonia. 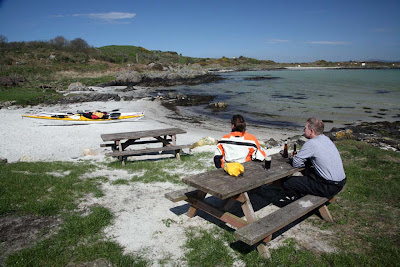 We sampled the produce of Scotland, Ireland and Estonia in the delightful beer garden. We decided that the lack of draught beer would in no way lead to a marking down of this establishment's markings. 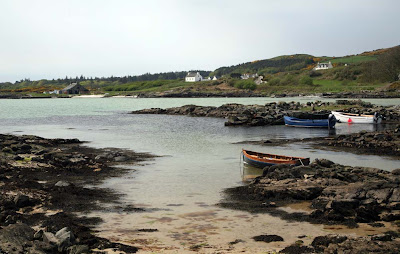 The Boathouse was established in 2004 after the community buyout of Gigha from the former landlord. Prior to that, the establishment of new businesses on the island had been restricted. It is run by Joe and Lindsay and in season is open from 11am till 4pm and 6pm till 11pm. It also serves a wide variety of snacks and meals. The soups are excellent. Other facilities include showers, washing machines and tumble driers. There is free camping on the grass behind The Boathouse but it must be arranged in advance through reception at the nearby hotel (tel. 01583 505254). A further reassuring amenity (for kayakers who may over estimate their abilities) is the store for HM Coastguard which is situated in the loft of the building.

All in all, this is a near perfect sea kayaking pub and fully justifies a top 5* rating.