Harnessing the power of the wind. 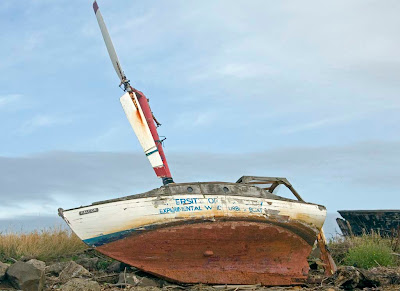 The City of Adelaide was not the only wind powered craft to be found high and dry at Irvine. Not far from her decaying timbers lies another wooden sailing vessel. She is the Falcon, a converted 18' Blackwater sloop.

Instead of a mast she has a 16 foot twin bladed turbine mounted to a helicopter tail rotor hub. This transmitted the power to a large 3 bladed propeller. She was built as a post doctoral project run from 1983 to 1986 by Dr Neil Bose of the University of Glasgow.

She was able to sail in all directions to the wind, including directly into the wind. In 15 knots of wind she could do about 5 knots. I could just about keep up with her for a short (very) distance. 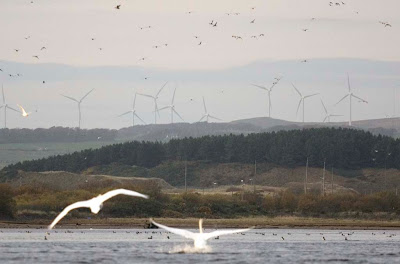 The Falcon's turbine is unlikely to turn again. In contrast, the rotors of the Busby Muir wind farm to the north of Irvine were turning steadily. It was commissioned in 2004 and its twelve towers each stand 100m high. It has a capacity of 24MW and is shortly to have 3 additional turbines added.

In the future great wind powered ships may again sail the seas. I wonder if they will have sails or turbines?
Posted by Douglas Wilcox at 10:18 pm 2 comments: