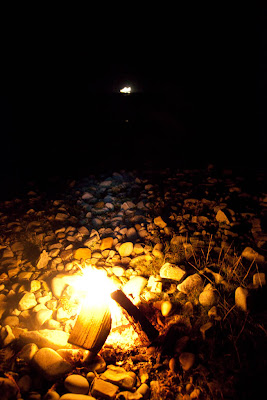 The midge attack was ferocious as we put the tents up on the shore of Loch Tarbert. Fortunately it was a clear night and the temperature plummeted, sending the little illegitimate insects back to the swamp from which they had come. We lit our fire on the beach but its little pool of light did not extend far into the darkness of the moonless night. The vault of the sky twinkled with so many stars that their number was completely beyond the comprehension of us city dwellers.

To the south, Altair twinkled brightly before being joined by the steady brightness of Jupiter as it rose above the dark shadow of the Paps of Jura. The Milky Way arched clear across the sky from the SW to the NE horizons. High above us, to the NE, the "W" of the constellation Cassiopeia shone brightly. I used one of the arms of the "W" to guide me to where the Andromeda galaxy lies. I am pretty sure I saw it, but my eyes are not as sharp as they used to be and I regretted not bringing binoculars. To the NW, Ursa Major (or the Plough) guided our eyes to the Pole Star, high in the northern sky.

Our necks were aching by the time we lowered our gaze to the horizon. But what was that bright light out in the darkness of the middle of the Loch? 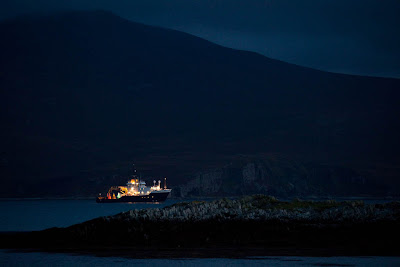 We had almost expected it to be a UFO but there, all lit up like a Christmas tree, was the NLV Pole Star. She is one of the Northern Lighthouse Board's two ships for maintaining lighthouses and navigation buoys. We had seen her sister ship, the NLV Pharos off Ardnamurchan Point earlier this year.

The NLV Pole Star was launched in 2000 and is 51.52m long. She has a dynamic positioning system which means that she can hold an exact position, even in pretty testing conditions, by using a combination of GPS and thrusters. She has a shallower draught than her larger sister ship, so she can operate in more restricted waters.
Posted by Douglas Wilcox at 8:54 am No comments: