The Prisoner and the Village, St Kilda. 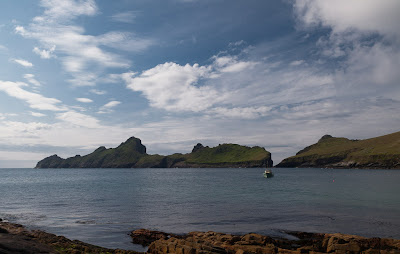 The morning dawned fair. We were all feeling a bit tired after our paddle to Dun the previous evening... 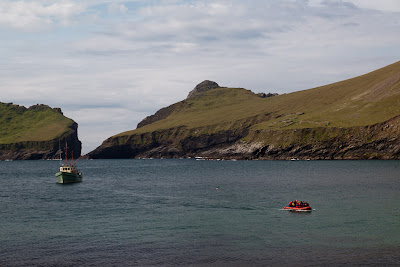 ...so we decided to spend the morning exploring the village. 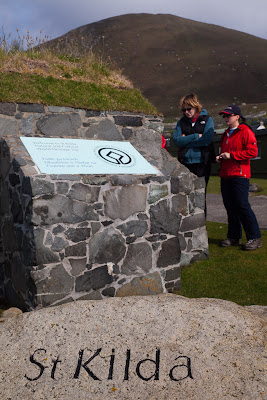 We waited to meet the National Trust for Scotland warden at the pier head and he introduced us to the island. 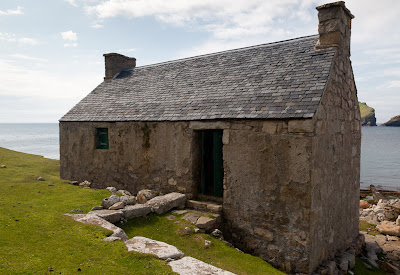 We started at the feather store... 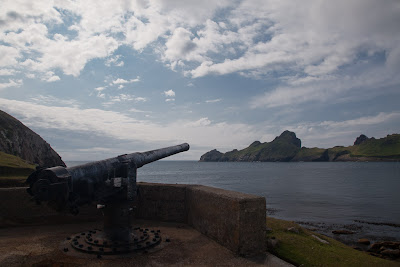 ...then moved to the gun that was installed after a German U boat had shelled the island's Royal Navy radio station in WW1. 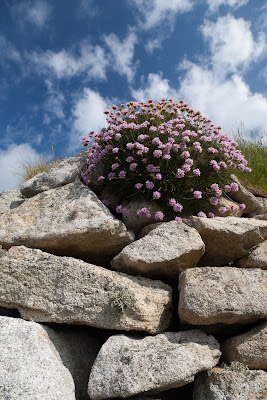 Thrift was still flowering here but it was well past on the mainland. 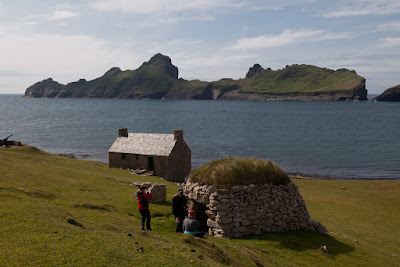 Walking towards the village we passed the first of the many storage cleitean that are scattered all over the islands before making our way... 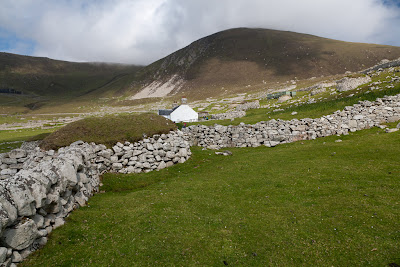 ...to the island camp site (prior permission from NTS required) is in a walled field behind the church and schoolhouse. 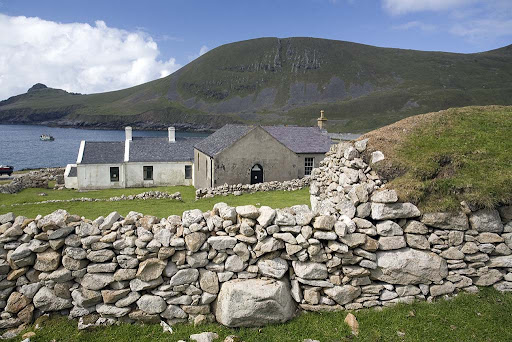 We then walked down to the church and schoolhouse. 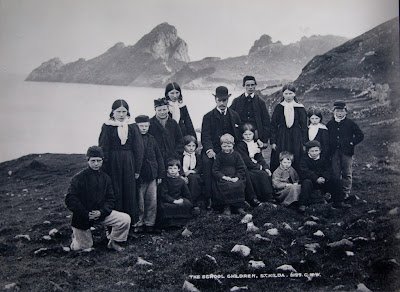 The class of 1886 photographed with a visitor, Mr George Murray, by N MacLeod (George Washington Wilson collection Aberdeen University). Wilson toured Britain giving many slide shows of life on the islands. The Victorians could not believe such "primitive" conditions existed in Britain. (They clearly hadn't visited many industrial cities' slums!) His collection is now held at Aberdeen University. 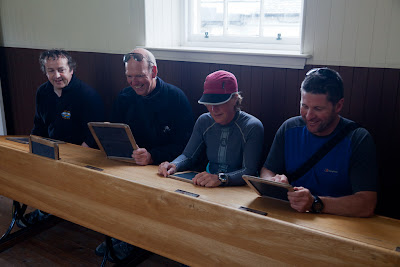 The class of 2011. Donald burst out laughing in class but naughty Ken got caught copying Donald's slate! 100 lines all round. 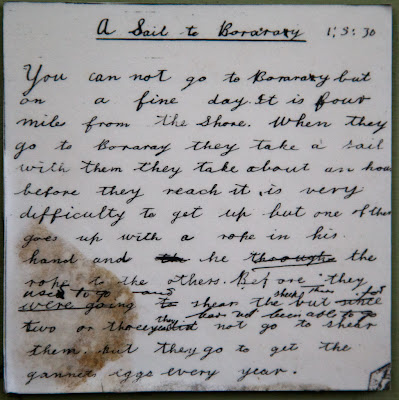 One of the last written exercises, from just before evacuation in 1930. This pupil's concentration seems to have been distracted half way through the lesson. We were struck by the words "You cannot go to Boraray but on a fine day.." We had hoped the following day would be fine to allow us to paddle to Boreray but the forecast was not promising... 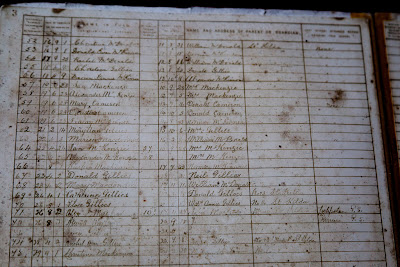 The last pupil entered on the school roll was Kristina MacKinnon on the 1st of April 1929. 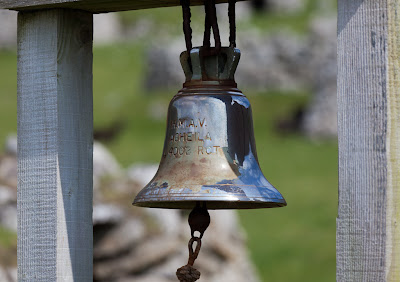 There are a lot of bells on St Kilda. Ship's bells are in plentiful supply.. from the many wrecks that have come to grief on St Kilda. This particular bell came from HMAV Aghelia, an Army Landing Craft that supplied St Kilda until she was sold off in 1994. The village bell no longer rings the ship's watches, it rings for the volunteer work parties to come in from the fields... 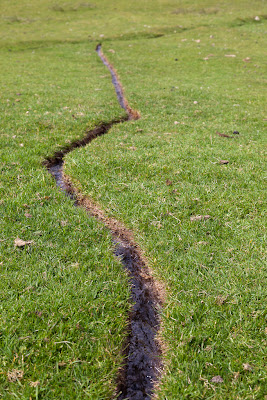 ...where they are restoring and maintaining the village buildings and drains. 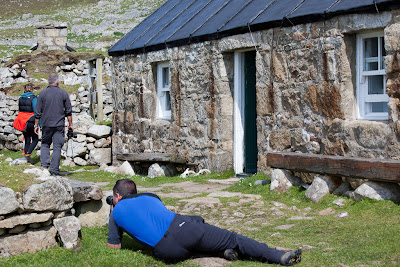 Ian got a good perspective for his shot along the village street. 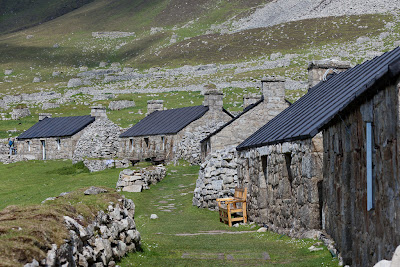 Given my bad knee, I had to make do with a more conventional standing viewpoint. 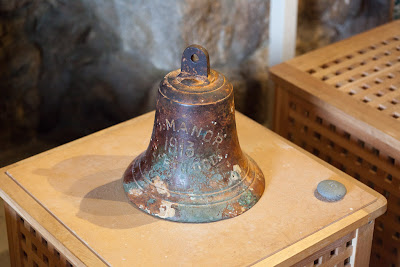 One of the 1860's houses has been restored as a museum. Inside, another bell is displayed. It was recently recovered by a diver in  Glen Bay on the other side of the island. It had originally been fitted to SS Manor but was transferred to the trawler Kumu,  which sank on 19/2/1929. 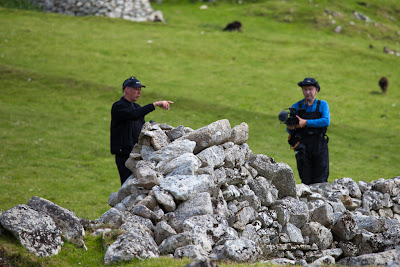 Simon interviewed Donald who has a deep interest in and extensive knowledge of St Kilda's geology, natural and human history. 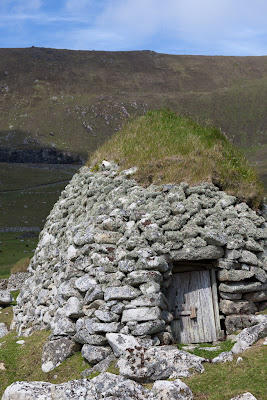 This large cleit is reputed be the house of Lady Grange who was marooned (and effectively a prisoner) here in 1734 by her husband. He was the Lord Advocate of Scotland and they both enjoyed a drink. They had separated in 1730 after years of his infidelity and her increasingly aggressive and unpredictable behaviour. She started spreading rumours that he was a Jacobite sympathiser so he had her removed to the Hebrides, first to the Monach Isles then to Hirta. 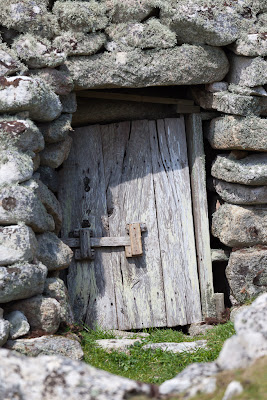 Whether this cleit was actually her house is debatable, though it is on the right site and is of the same dimensions. I wonder if this was house number six? 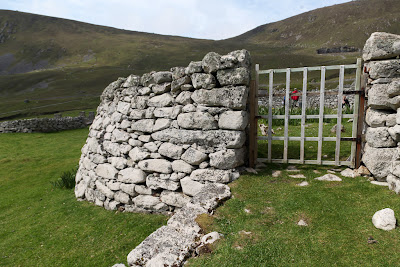 The cemetery lies just above the village street. Because the island's soil is so shallow, a wall was built and the inside was filled with soil to make it deep enough for burials, once a corpse had rotted the bones were moved to the side to make room for further burials. 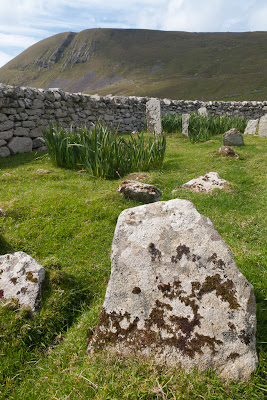 Most of the graves are marked by simple stones but after the island was evacuated, some of the emigrants marked deceased relatives graves with modern carved headstones. 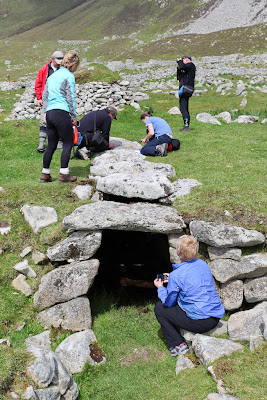 Above the cemetery you can find an underground chamber called a souterrain. 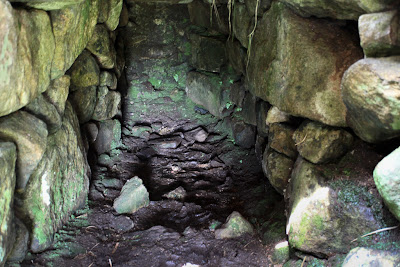 It is of great antiquity and the islanders called it the House of the Faeries. It is about 10m long and dates from the Iron Age. 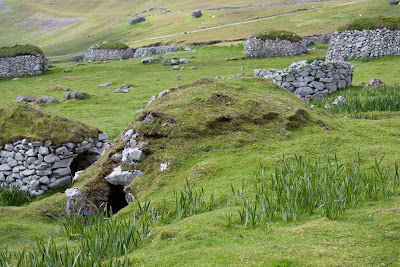 Above the souterrain is the site of the medieval village, as described in Martin Martin's first hand account of a visit in 1697; "A Voyage to St Kilda" published in 1698. This mound is Calum Mor's house and is probably the sole survivor of the pre 1830's houses. 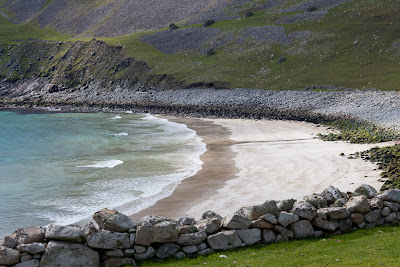 We now made our way down to the shore. Sand appears at low tide in the summer but is carried away by winter storms. 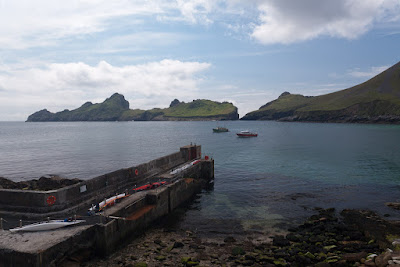 The Cuma had arranged to pick us up at lunchtime so that we could get into our kayaking gear and go for an afternoon paddle. However, all of us had become so fascinated by what we had seen so far that we decided to go for a walk round the interior of the island instead....
If the village and its history interests you, you can read about some of the other things I saw on my 2008 visit here.
Posted by Douglas Wilcox at 10:42 am 7 comments: