It is with horror that, in this morning's Independent, I read of the Japanese whaling fleet setting sail to kill humpback whales. These magnificent wild creatures are some of the largest organisms ever to have lived on Earth. 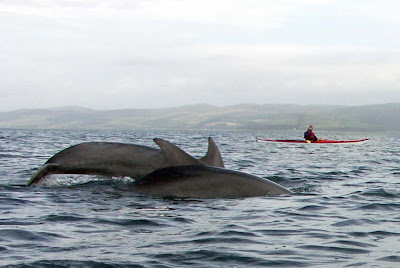 Bottlenose dolphins playing free in the Sound of Gigha.

I have been blessed by frequent sitings of cetaceans off Scotland's west coast. Bottlenose dolphins have come to us and displayed highly inquisitive and recreational behavior. Off Gigha three of them brought rocks up from the bottom on their beaks, tossed them in the air and then whacked them for six with their tails. I have also witnessed minke whales breaching off the west of Harris and narrowly missed seeing the humpback whale off Arisaig a few years ago.

In Scotland we used to kill whales. I am glad to say we no longer do so. Where would you rather see a whale, in the sea or on a plate? Despite writing this on a Japanese computer, I have decided not to buy Japanese goods this Christmas.