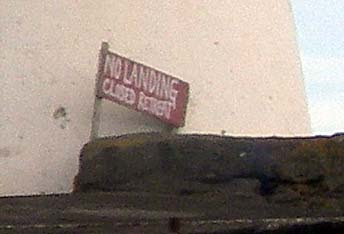 Following my post of yesterday about our pleasant visit to Holy Island Chris has replied as follows with details of a very different experience:

interesting, as always, to read of your adventures-especially Holy Island as Barbara and I had a very disappointing experience there a few weeks ago while padding with two friends.

We had opted to camp (very, very discretely) at the north tip of the island - arriving quite late. Being aware of the island and it's community, we were continually careful to do nothing to offend anyone. One of our party even collected four bags of rubbish from our vicinity to take away and dispose of.

We were aware that several young people - probably attending one of the commercial courses held at the monastry - had seen us and so were not surprised to be visited by one of the monks who spoke to one of our group. Unfortunately, I was busy with our meal and so didn't hear the exchange until the monk had left.

Assuming this had been of the nature of asking where we had come from, where we were going, had we had a good day etc I was dismayed to discover that my friend was quite upset at the aggressive and unpleasant manner in which he had been informed that we were unwelcome and, had it still been light, we would have been ordered off the island then and there.

Initially saddened at this contradiction to my assumed understanding of the monk's Buddhist philosophy; my thoughts turned to our rights to actually be there and to wild camp and whether we had inadvertently failed to honour the responsibilities that go with that right.

I could find no reason to support this.

We had kept well clear to avoid intrusion into the community there; had tried to leave the place better than we had found it; had refrained from building a fire and had behaved with respect for the island, it's community and it's wildlife.

Upon arriving home, I immediately emailed the monastry via their commercial email address and put our case explaining our disappointment and wondering whether, had we been prepared to pay the B&B fee to stay, we would have been treated in a similar way.

I also questioned the legality of their stand outlawing our right to camp and especially their signs banning access to the area below the high water mark.

I have had no reply to my email - again disappointing as I would dearly have liked to try and explain our philosophy of peaceful co-existance to them.

Long response - I apologise, but thought I'd share this experience on Holy Island as a thankfully rare example and so different to many other, welcoming people we've met on our sea-kayaking adventures.

Be warned if you choose to camp on Holy Island - we were also "threatened" with the possibility of wild ponies attacking us!

Thanks for an interesting and informative Blog.

My reply to Chris is as follows:

Chris thanks very much for this reply.

When Tony and I visited and saw the NO LANDING sign our first comment was "this lot haven't heard of the Land Reform Act." We landed just about 100m along the coast from the sign and as we saw no monks and enjoyed unrestricted access to the hill, we relaxed.

However, your experience has rekindled our worst fears.

I assume that you were not camping in the immediate area of the buildings or on enclosed cultivated land and so under the land reform act you have a legal right to wild camp providing you do so in small numbers and do not stay for more than three nights.

The religious beliefs of the landowners have nothing to do with this right under Scottish law.

I would strongly suggest that you report the aggressive and illegal behaviour of this so called monk to both the local authority:

"Local authority powers: Local authorities have been given new powers within the Act to assert access rights."

and to Scottish Natural Heritage

and to your MSP

and to the Scottish Canoe Association

I have a good mind to head for Holy Island on our next camping trip.

I also believe that landowners now have a responsibility about allowing threatening and dangerous animals to roam free. What I can say is that Tony and I wandered through a very laid back and peaceful herd of Eriskay ponies who had clearly reached a higher state of Buddhist consciousness than this particular monk!

Chris go for your rights! I will help in any way I can.

The current owners of Holy Island are the Ropka Trust
email office@holyisland.org