Skipping along the Ayrshire coast. 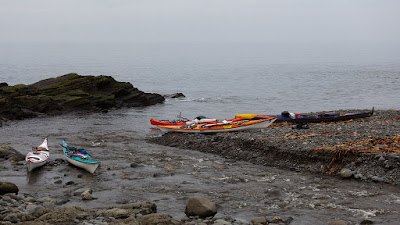 It was now time for second luncheon but there are few breaks in the rocky ramparts of Ayrshire's Atlantic Coast. Fortunately we came to Currarie Port just in time. Currarie Port is a surf trap that catches any swell going, on its steep shingle beach. Jim exploited its weakness by paddling up the burn that empties into  its southern corner. 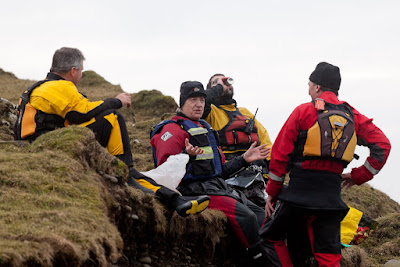 This proved to be a first class spot to take a break and enjoy a chat about the wildlife and partake of a refreshment. David started the conversation off by asking Phil "So just how big, exactly, was this kangaroo?" 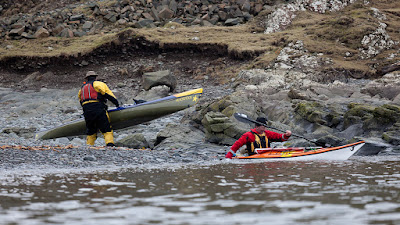 Our postprandial launch from the burn mouth proved so easy that Phil pushed himself off without his paddle. With all the excitement of catching sight of his first kangaroo, it must have skipped his mind completely. Fortunately Jim spotted it on the beach and threw it after him! 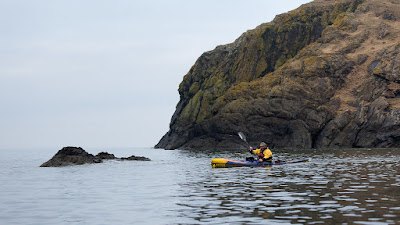 Leaving Currarie Port, the cliffs to the north are basalt and the hill behind Jim goes by the name "Donald Bowie". Who this gentleman was, has now been lost in the mists of time. 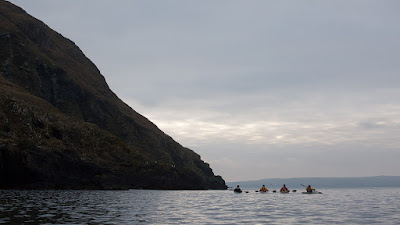 South of Currarie Port, the hillsides are still steep but they are now composed of sedimentary greywacke rocks.  As we approached the headland of Craigangal... 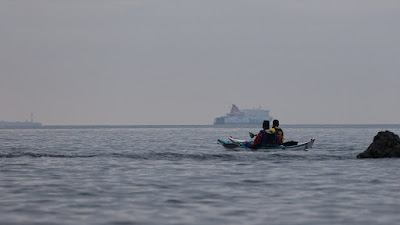 ...we caught sight of the first of several ferries. They were heading for Ireland and keeping clear of Corsewall Point lighthouse, which... 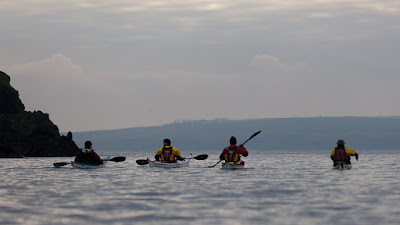 ...marks the western approach to Loch Ryan.  Andrew and Jim, who had not paddled here before, thought that the change of rocks signalled that our trip was now all but over...