Dry mouths in the deceptive calm of Portnahaven. 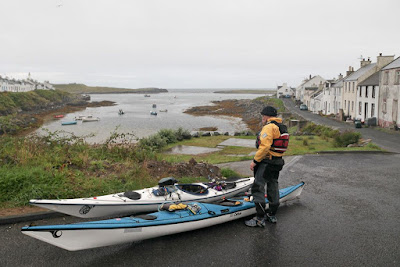 Tony and I had been trying to complete kayaking round Islay for several years and despite frequent visits, we had been unable to paddle the west coast of the Rinns of Islay. This was to be my third visit of the year and only a few weeks before, had already turned back from the Rhinns after meeting huge swell in otherwise benign conditions. Prior to this trip, a succession of days with SE winds had flattened the Atlantic swell, which is the "Governor" on this coast. Although the weather was to be mixed, the tide times were ideal. It would be one day after neaps and the north going flood would start at about 0900 hours at Portnahaven on the south end of the Rhinns.

It was 0820 as we drove down the steep road into the tiny hamlet of Portnahaven. The hamlet almost impossibly manages to cling to the rocks of this untamed coast. In the shelter of Portnahaven it was difficult to judge the wind strength as it was SE and offshore. The smoke blowing horizontally from the chimneys suggested it was about 3-4. It was time for the Clyde coastguard Marine Safety Information (MSI) broadcast on the VHF marine band.

"Later" means 12 hours or more by which time we hoped to have cleared the Rhinns. The SE or S would either be cross offshore or cross shore as a tail wind so we decided to go for it... 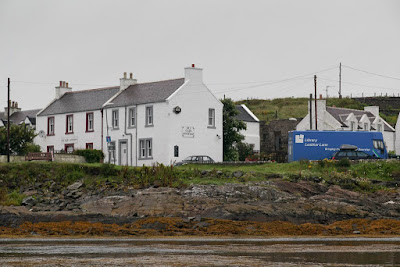 ...and after several visits to the public toilets, we launched in the calm of Portnahaven harbour. We passed the conveniently situated pub, An Tigh Seinsse (house of the singing) but it was shut and our mouths remained dry. 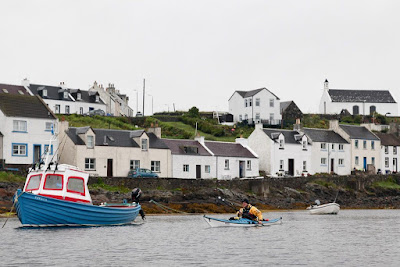 Portnahaven was built as a planned crofting and fishing village during the 19th century...

...and its cluster of whitewashed cottages crowd round a sheltered inlet off one of the roughest pieces of water in the British Isles. None of the local boats showed any sign of leaving their moorings that morning. A combination of Atlantic swell, strong tides, shallow, reef infested waters and high average wind speeds make it an interesting place to kayak...

...these were the conditions which had caused us to turn back a few weeks before.
Posted by Douglas Wilcox at 12:36 pm 7 comments: