The sun goes down on the last ferry to Jura. 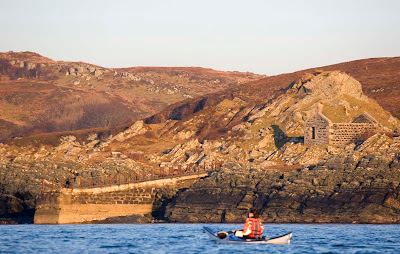 As the sun set on our Dorus Mor adventure, we returned to our launch spot, the old Craignish Pier. 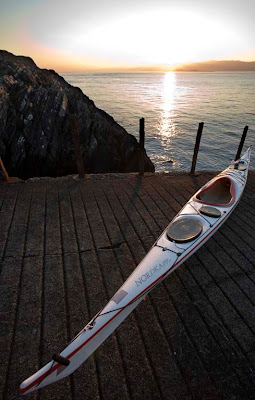 There had been a ferry running between Craignish and Kenuachdrach (now Kinuachdrachd) on Jura since the 17th century. According to the statistical account of Scotland of 1843, 3,000 sheep and 1,000 black cattle were shipped through here each year.

The present pier is not shown on the 1875 Ordnance Survey map butthe 1881 British Census records the ferryman's cottage as being occupied. The 1900 Ordnance Survey map does show the pier as a T shaped structure. Presumably the top of the T was made from wood, as no trace of it remains today. 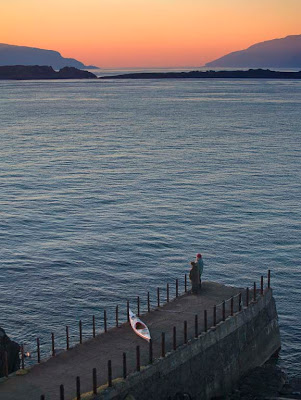 You still can walk to the end of the pier to watch the sun go down over the Sound of Jura and the Gulf of Corryvreckan but you will wait a long time for a ferry. The last ferry left in the 1930's.

Nowadays Jura has no direct ferry link with the mainland. You need to take a ferry to Islay, get off then take a smaller ferry from Islay to Jura. Jura is a remote and wonderful place, you would be quicker going by sea kayak!

PeterD said...
that pier looks very tall - how did you land here? Is there a beach nearby you could land at?

Peter there is a small beach about 500m further back on the single track road that ends at the jetty. Unfortunately there is no car park there. In dry weather it might be possible to park on the verge but it was too boggy when we were there. We carried the kayaks down the steep slippery rocks to the right of the pier. 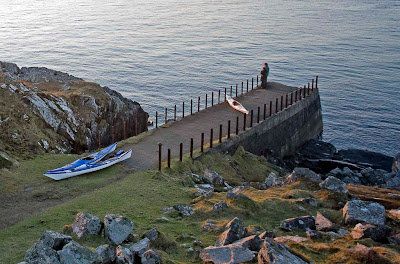