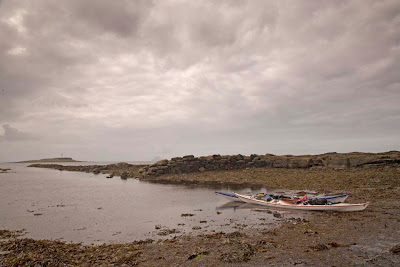 At Kildonan on the south coast of Arran, a number of rocky dykes run at right angles to the coast out into the Sound of Pladda. They are composed of volcanic intrusions which forced their way through the bed rock of older sandstones and shales. Over time these softer rocks have eroded leaving long fingers of volcanic rock which are known as the Arran tertiary dyke swarm.

You an also see the little island of Pladda and the more distant Ailsa Craig. Both have fine lighthouses built by the Livingstone dynasty. 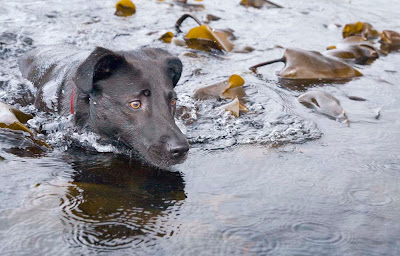 Bob is Tony's dog and is a very powerful swimmer. As Tony and I paddled out past the end of one of the dykes, Bob came racing along and leaped into the water from the very end. He clearly preferred the look of my Nordkapp LV to Tony's Rockpool Alaw Bach. He made straight for my back deck and managed to climb on as I braced madly.

Bob is a very clever dog but he knows nothing about geology and plutonic activity.