Sunset over the Great Race of the Corryvreckan

Sunset over the Gulf of Corryvreckan with Scarba behind. 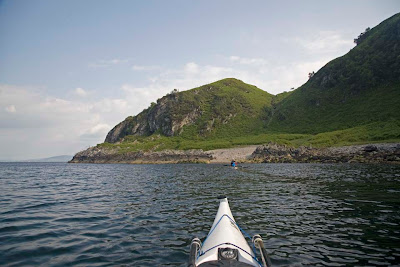 After we came through and crossed the Corryvreckan twice we found this great little bay to camp at with a ringside seat of the tides rushing by. 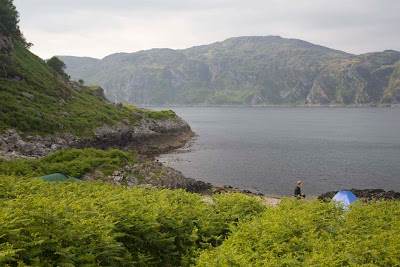 LW water was at 18:04, this photo was taken at 18:24 and our observations confirmed that slack water lasts about an hour at neaps, very roughly 30 minutes on either side of LW and HW. On a previous visit to the Corryvreckan, at springs when we landed on the Scarba shore, slack water lasted no more than 10 minutes and it very quickly accelerated to 18km per hour so forget the rule of thirds in these waters! At slack water, the wind also dropped and hordes of midges descended upon us. We were no longer top predators and our ranking in the food chain dropped a notch. A very persistent cuckoo seemed to be laughing at us. 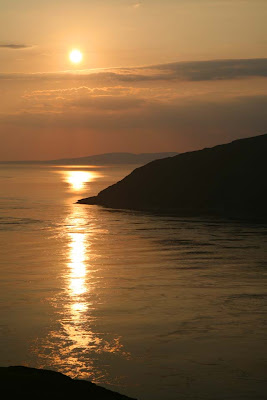 Tony and I climbed high into the hills above the Corryvreckan at the north end of Jura. Sitting on a rock we witnessed the most amazing sunset. We were not the only witnesses. hundreds of larval and adult ticks attacked us. Our position on the food chain dropped a further notch. At least the last wolf was shot in the 18th century! 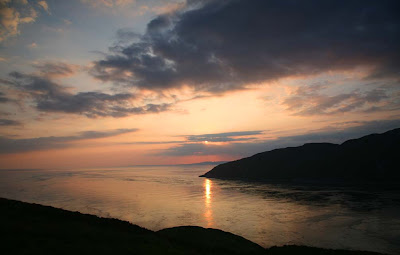 The Great Race began to form as the flood built up and stretched far out to the western horizon. 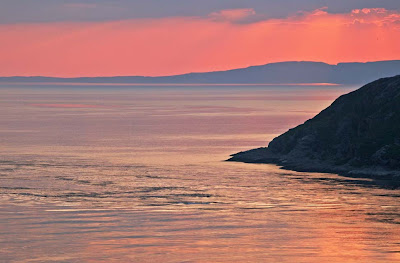 Then as the sun set and the golden light turned to pink, we began to hear a roar like a distant river in spate. Right on cue the Hag appeared, her breaking waves twisting and dancing in a sunset maelstrom. This photo was taken at 21:26 3hours and 20 minutes after the start of the neap flood. The waves of the Hag had just started to break. On a previous visit at springs (see top photo) the waves began to break much earlier. It was very noticeable that at neaps the strongest current hugged the east and north side of the Jura shore for the first 3 hours of the flood then in the last 3 hours it moved over towards the Scarba shore. 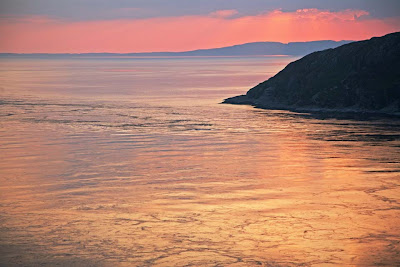 This wide angle shot will give a better impression of the scale of the Hag. She rises above a pinnacle on the sea bed. 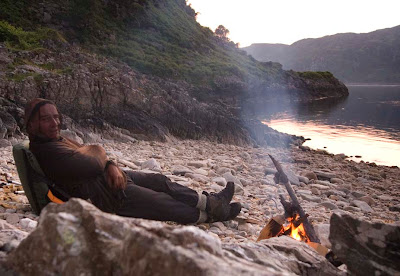 The end of a perfect day. On return to the camp each of the millions of Jura midges seemed to have rung several friends and invited them to dinner. The air was thick with the blighters. My Canadian midge jacket did the business, none of that dreadful itch round the midriff, and by extracting my arms from the sleeves, I was able to sup a most appropriate libation, a 25 year old Jura malt whisky, bottled from a single barrel! Sea kayaking heaven!
Posted by Douglas Wilcox at 11:02 pm 6 comments: