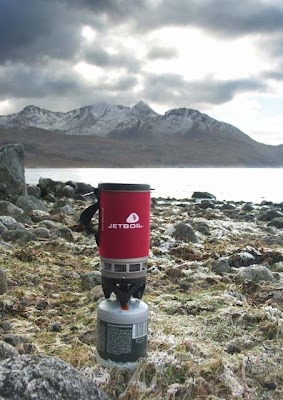 A version of this test first appeared in UK Paddles magazine in June 2005.

Increasingly sea kayaking is seen as a 4-season activity. Although in the coldest weather most trips are single day, kayakers venture into remote exposed areas. Last spring on a sunny day, I learned first hand how important it is to have means of making a quick brew on such trips. One of us fell out of the boat trying to land on a steeply shelving rocky beach. Another two slipped in above their waterproof trousers trying to recover hapless kayaker and boat. The water was freezing.

There was much laughter and we soon changed into dry clothes but the biting north wind had chilled us to the bone. Lunch had been early that day and our flasks were now empty. But fortunately my main camping stove and pans were still in my boat from a camping trip. We soon had piping hot drinks which not only physically warmed us, but did much to restore morale for the exposed 15 kilometre crossing ahead. 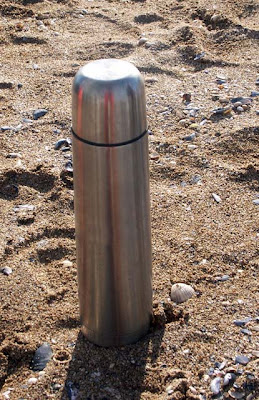 Aladdin 0.75ml stainless steel flask. £9 from John Lewis.
Not all stainless steel flasks are the same. Some do not keep liquids hot for more than a couple of hours and some have an annoyingly complex push button spout that will not pour thick drinks and invariably unscrews itself into two pieces when you try to remove it. This flask is different. Unopened it will keep drinks hot for a full day’s paddling (8 hours) and it has a simple one piece screw cap which is easy to remove to pour thick soups. It is remarkably cheap but obviously has limited capacity and if only half the drink is used, the rest cools down quite quickly. 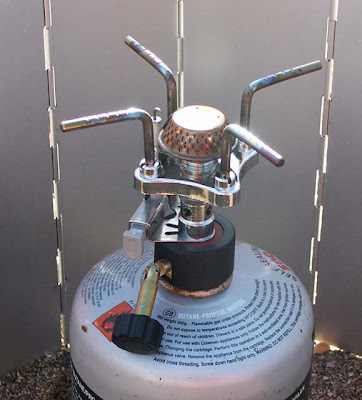 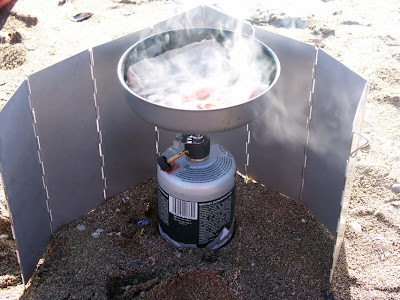 The OutdoorDesigns mini gas stove fits on 100g or 500g screw on gas cylinders. It arrives in a neat plastic case and its 4 support arms fold out easily. It has a piezoelectric igniter that worked even in the coldest weather. The burner is a good size and the control valve allows a decent simmer with out burning. There is no built in windshield. Overall, this is a highly effective product and using the above combination, it boils a pint of water very quickly; see results for comparison. 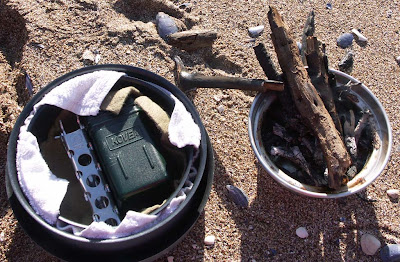 If you have not used MSR Duralite (hard anodised aluminium) pans yet, you really should try them. They conduct heat extremely efficiently and it is possible to cook thick drinks/food like soup and porridge easily and without burning. The effective non-stick means that they are easy to wipe clean. The stove and handle fit inside the smaller pan. The accessory frying pan adds versatility (bacon sandwiches, yum!) and fits the base of the pans for carrying in the supplied mesh bag. The whole fits a Quest sized day hatch cover.

The HiGear aluminium windshield is very light and folds flat for storage. It is large enough to shield not only the burner but also small pans, even when the burner is on top of a 500g gas cylinder. Unfolded into a “U” shape, it is self-supporting and it also has two sliding wire pegs that can be pushed into turf or sand for additional stability. This is highly recommended, not just for day trips but all camp cooking. 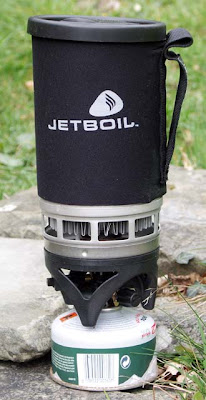 JetBoil burner/heat exchanger/cup. £65; Cotswold
As soon as I saw one of these, the “techie” in me just had to have one! It is made of first class materials and is of a unique design. The cooking pot/drinking cup is made of anodised aluminium and has a heat exchanger/wind shield permanently fixed to its base. A removable insulating neoprene sleeve with a sewn on holding strap covers the pot. There is a plastic lid with a drinking hole and a plastic cover to shield the base unit when the burner unit is removed after heating.

The burner unit attaches by a system of twist on lugs and slots but I had to use a file on the slots to get a good fit. The unit is designed to be self contained and the burner unit, with a 100g gas cylinder, fits inside the pot. If you store it this way, it is best to put the burner in a poly bag before putting it in the pot. Residual soup and or salt/sand from the base of the cylinder will set up an electrolytic reaction between the aluminium of the pot and the steel of the cylinder.

The combination of gas cylinder/, burner and pot is quite tall and the 100g cartridge is very narrow which makes the whole unstable. It is very easy to hold the top of the pot as the heat exchanger is so efficient but 500g cartridges would be more stable to use on a longer camping trip. Accessory pots are an (expensive) option which might be useful on a trip with more than one person, but an Aladdin insulated mug (£3.50 from John Lewis) is more than ten times cheaper! Another problem with drinking from the pot is that soup dribbles down the fabric cover of the neoprene jacket which is difficult to clean and would be rather unhygienic on a longer trip.

The JetBoil has piezo ignition that works well in temperate conditions but which failed to work in cold conditions, even when the OutdoorDesigns stove successfully ignited. A match soon had the JetBoil going but there is very little control over the flame and each time I attempted to cook soup it burned on the base. The pot proved very difficult to clean, as there is no non-stick. However, the unit was highly effective at boiling water. Even on a windswept, wave soaked reef, during the 5* rescue of a “casualty”, the JetBoil came up with a several hot drinks in a matter of minutes. This was very impressive. I noticed a problem with 100g cylinders, particularly when full and in colder conditions. Once lit, the burner tended to flare as liquid gas came through the burner. This burned the neoprene jacket and my fingers and the control valve was not adjustable enough to stop it. 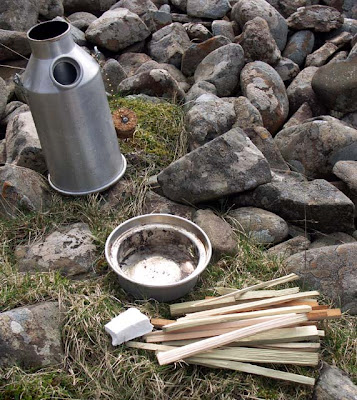 This wood-burning stove, of cunning design, is totally different from anything else. The kettle and the fire tray are made from aluminium. The centre of the kettle is a hollow, conical chimney that narrows from the base so most of the water is at the hotter top. It carries a pint of water retained by a large cork secured by a chain (remember to remove the cork before boiling.) The kettle on test did not leak but a friend’s dribbles a little through the cork so he carries the water separately. Only water can be boiled so if you want hot soup or porridge you will need to use a dried packet or one of the quick varieties of oats you can pour boiling water over, stir and eat.

Although it will burn anything, even damp wood, I have found carrying a small amount of finely split dried kindling to be very effective. Enough kindling and firelighters for 3 fires can be carried inside the chimney. The kettle smells strongly of smoke after use so I carry it in a heavy poly bag. 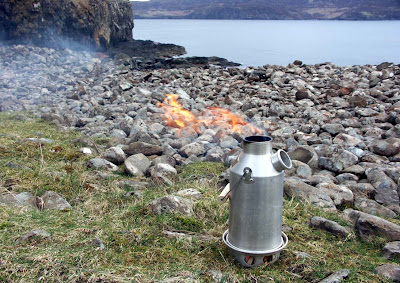 In use, a rocket of flame spouts from the top of the kettle and is very impressive and morale raising in windy conditions. With dried kindling no sparks escaped so it should not set the countryside alight! Within minutes you have a rolling boil and you can lift the kettle off the fire tray using the wooden handle and pour using the cork and chain to tip the kettle. You soon judge the exact amount of wood to achieve a boil and leave just a few embers that can either be doused or used to start another fire. It is very cheap to run and can be used to produce plentiful hot water for washing on a longer trip.

Last year on islands to the north and west of North Uist, we ran low on gas. A Kelly Kettle would have been a boon, as it will burn almost anything though damp wood does produce a lot of smoke. It also works extremely well in high wind conditions. My friend fell out his boat during a surf landing in force 5 conditions on a March camping trip to an island off the west coast of Skye. He was soaked and frozen and it was getting late. The Kelly Kettle produced a pint of boiling water for two drinks within minutes, in an exposed position that the gas stoves struggled in.


If you do a Google search on these stoves, you will discover lots of web pages with pseudo scientific tests which measure heating times in great detail. In this test, on a sheltered beach in the Solway, from unpacking to boiling time, the mini stove/pan/windshield combination, the JetBoil and the Kelly Kettle all produced boiling water within 20 seconds of one another.

On an exposed island in force 4 to 5 winds, the Kelly Kettle really came into its own boiling a pint in a third of the time of the gas stoves. On a wet reef with no level ground to set a stove on, the hand held JetBoil boiled a pint in conditions where it was not possible to set either of the other stoves up.

For a quick cup of soup, the flask is hard to beat but once you have drunk it, that’s it has limited application for an emergency quick brew. It also lacks the psychological boost of actually creating a hot drink, from a cold start, in hostile conditions.

The OutdoorDesigns mini stove/ MSR mini cook set/ windbreak combination proved the most versatile. Not only would it boil as quickly as the others you could also use it to cook soup or even a bacon sandwich (solid food is out with the remit of this test).

The JetBoil is very high tech, worked in moderate winds without a windshield and, uniquely, could boil when hand held (not recommended by the manufacturer). However, it has several design flaws, outlined above, and was not very good cooking thick liquids.

The Kelly Kettle proved its ability to boil water in any conditions that you can find a small level base for it. It seems impervious to wind and is cheap to run, burning almost anything.

So which one did I buy? Well they all have strong points so I ended up buying all four! Which one do I like best? Well if I have to choose, the Kelly Kettle has to be the overall test winner, a case of low cunning beats high tech!
Posted by Douglas Wilcox at 9:03 pm 8 comments: