A whiter shade of pale in the Sound of Jura 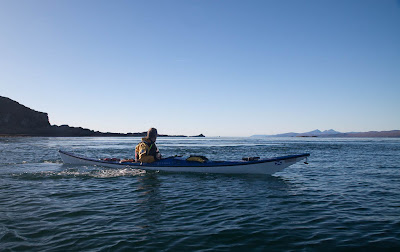 Once ejected from the Dorus Mor, we had to avoid the eddy, which at the the beginning of the flood runs south down the west side of Garbh Reisa. 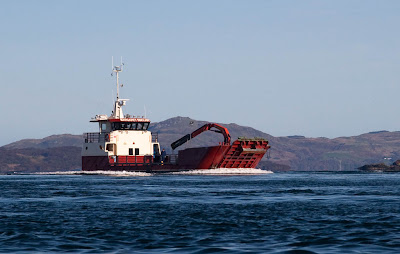 We were not the only ones watching out for eddies. We came across the MV Margaret Sinclair heading in the opposite direction to ourselves. Her twin engines put out 640HP but even so, she did not attempt to run through the Dorus Mor against the full force of the flood tide. Instead, she stood in close to the north shore, where a counter eddy helped her through.

The MV Margaret Sinclair is a 60 gross ton fish farm work boat and landing craft. She was built for the Inverlussa Shellfish Co Ltd. by Nobles of Girvan in 2006. She also does charter work as relief ferry for islands such as Jura and Rathlin. 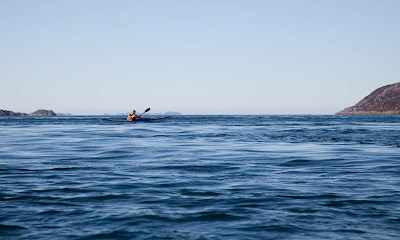 By now the tide was carrying us straight towards the Corryvreckan. On the horizon we could see the distant isle of Colonsay. Recently we had gazed from Colonsay through the Corryvreckan in the other direction. 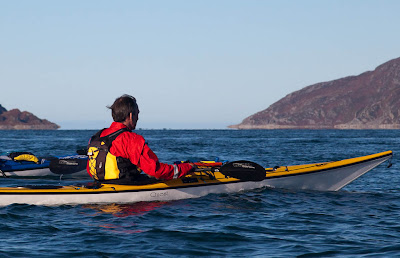 I could see that Phil had turned several whiter shades of pale as we drew closer to the Corryvrecka. Indeed we were now so close we could see the standing waves of the whirlpool on the horizon. Clearly he did not wish to reacquaint himself with Colonsay, possibly in an inverted position.

"You didn't say anything about going through there!!!" said Phil, with not a little desperation, and even a hint of accusation, in his voice.

"Relax Phil, of course we are not going through there" and, somewhat under my breath, "yet."

Tony chipped in, "So let's paddle quite hard and see if we can break out of this current and make it up the east side of Scarba!"

Phil was only too happy to oblige and for the next little while, we PLFed.
Posted by Douglas Wilcox at 8:49 pm No comments: