Saved by a sundowner off Ardrossan. 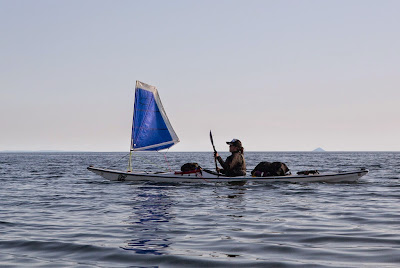 As we set off from Ardneil Bay for Ardrossan with Ailsa Craig on the horizon, a light breeze got up and... 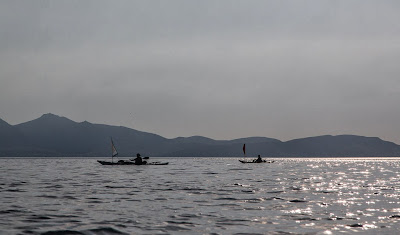 ...it was a great relief to my injured shoulder to be able to hoist the sails. The sun was now well round to the NW and was setting well to the north of the Arran mountains. We were now having to share our sea room with somewhat bigger craft.

Away to the south, the MV Isle of Arran ferry was heading out from Ardrossan to Campbelltown, the route we had taken out to Kintyre six days previously. The 190m bulk carriers MV Star Polaris and the 289m CHS Cosmos were at anchor waiting to make their way up to Hunterston. The 275m Da Yuan Hu tanker  was waiting to make her way to the Finnart oil terminal. The stone tower marks Horse Island which lies off the port of Ardrossan. 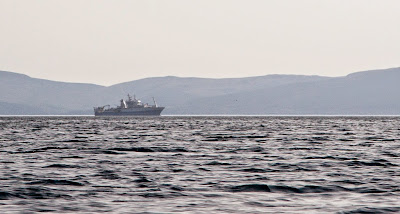 Out at sea the 68.6m MRV Scotia was making her way up the Clyde. She is a Scottish Government fisheries research vessel. 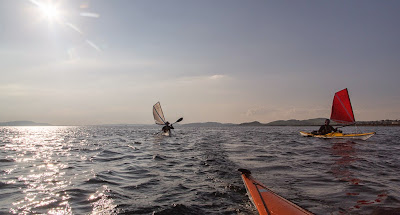 Then my prayers were answered, a brisk sundowner picked up and our kayaks were soon travelling at their full displacement speed.

The wind was slightly cross offshore from the ESE so it was a tight close reach all the way down the Ayrshire coast. 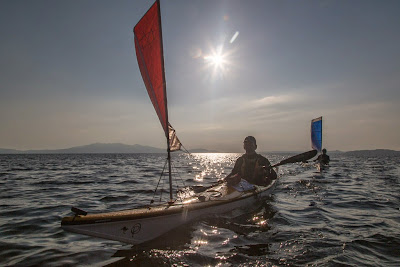 It really was superb fun what a way to finish a... 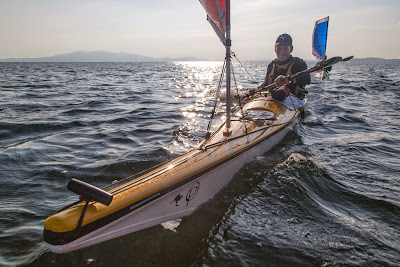 ...200km trip. Phil's expression says it all. Mind you, we still had the small matter of an awkward tide to contend with...