Kylie the lonely dolphin: a tale of anthropomorphism and anthropology at Ardlamont and the West Kyle buoy. 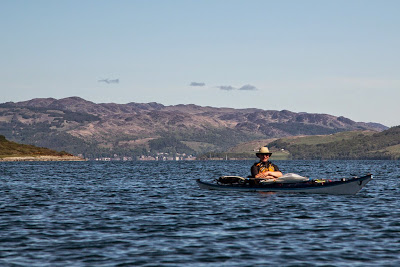 We had paddled from Ardlamont Point out into the entrance of the West Kyle of Bute, when we were stopped in our tracks. Both Mike... 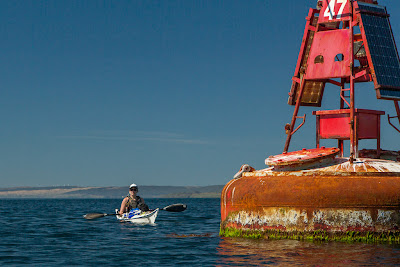 ...and Jennifer (not to mention Phil and myself) could hardly believe their eyes. 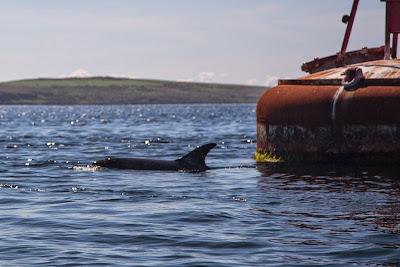 A solitary common dolphin was circling the navigation buoy. Mike and I had seen her exactly a year previously at the... 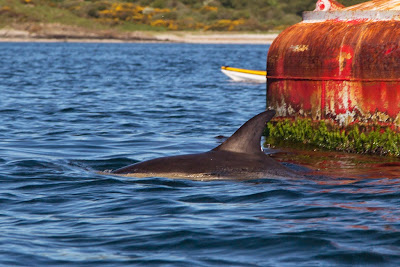 ...same buoy but then she was accompanied by a calf. Common dolphins are summer visitors to the West coast of Scotland and are usually seen in  large pods of 10 to 30 but...

...sometimes they congregate in super pods of several hundred to 1,000. I saw this pod of about 50 that were riding the wake of the Skye to Harris ferry in June 2011. 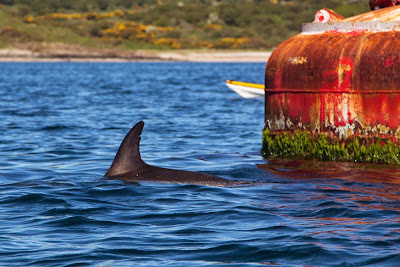 I don't know why Kylie has chosen a solitary life. Clearly she can't be completely alone, since she has recently had a calf, but she does seem to prefer the company of this buoy to a pod. Given the intelligence of dolphins, I assume she has made a choice, if that is not being too anthropomorphic. 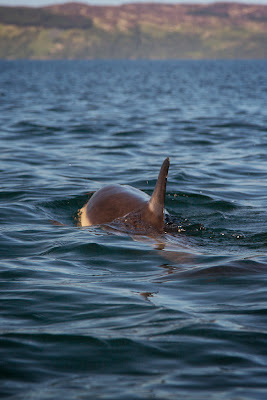 She has been seen here since at least the summer of 2011 and it was a real thrill to come across her again as she toyed with us, circling and diving beneath us then reappearing where we least expected her. 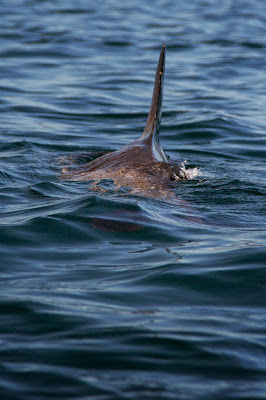 If we tried to paddle away from her buoy she would catch us up swim along side us, easily keeping up no matter how fast we paddled then with a flick of her tail she would streak ahead of us. 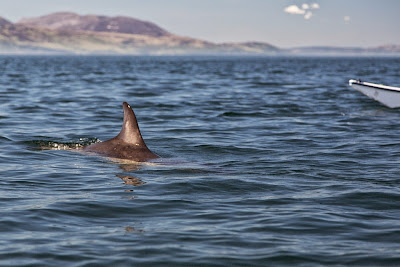 Kylie clearly enjoys interacting with visitors to her buoy and she has become a tourist attraction. Many kayakers, boaters, yachtsmen and hundreds of tourists from around the World on the Paddle Steamer Waverley have been fortunate to see her here. 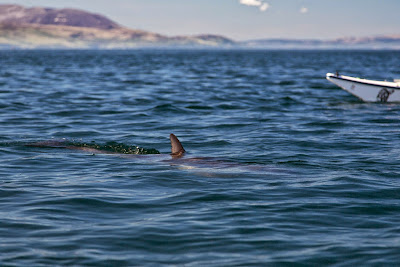 In some countries people like to eat dolphins (not to mention killing them first). Well I am not a hypocrite, I swat flies, I eat cows, I catch fish, kill them then eat them and my ancestors were whalers. However, I could not eat a dolphin, a creature which, due to its degree of intelligence, can interact with other dolphins (and humans) at a much higher level than cows can. In some countries they eat chimpanzees, in others dogs and in some places cannibalism is also traditional. I do not eat chimps, dogs or my neighbours either. It is up to each of us to draw our own line at what we choose to eat but I am glad that in the UK dolphins are protected and that Kylie will not end up barbequed on a British beach. Chacun à son goût.

As a Briton I am aware that there are many things that are not right in British society and we need to listen to and learn from others' criticism to make our society better. However, because Britain is so multicultural  it is a factor that makes it one of the more progressive societies to live in today. We are all learning from one another and as a result respecting and increasingly adopting what is good about each others' cultures. We also need to respect other countries'  rights to determine what is acceptable and legal for their people but that does not mean we need to agree with others' practices just because they are traditional. Other human traditions include burning witches, child sacrifice, incest, childhood female circumcision and on a bigger scale, slavery and genocide. I don't agree much with them either, no matter how much their proponents may argue for their continuation on cultural and traditional grounds or accuse their critics of cultural imperialism.

So there you have it, it's a free World (for humans). If you want to see dolphins come to Scotland, if you want to eat dolphins, you are free to go somewhere else. It's your choice. As humans we are fortunate that we are often able to make choices.
Posted by Douglas Wilcox at 12:10 pm 9 comments: