Canna island have a future as well as a past? 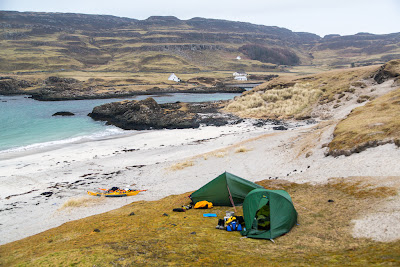 Morning dawned grey and blustery on Canna. The wind had got up during the night and I had to get up to tighten the tent guy lines. 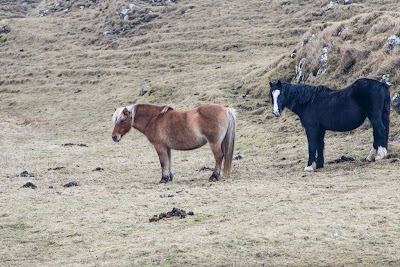 It was also cold. Our neighbours, these highland ponies, were standing back to the wind on the heavily frosted grass.

Looking over Sanday and St Edward's, the low clouds were scudding over the Rum Cuillin. Though the waters in Canna harbour were deceptively calm we were glad we did not have to consider launching of the storm beach at Guirdil on Rum. From high on Sanday, the sea to the south was rough though the F5 wind of the previous night had dropped to F4 and the forecast was for it to drop further in the afternoon. Whatever, the spring ebb tide was running straight against the southerly wind. Thoughts of paddling round Canna evaporated and we decided to go for a walk and look at the conditions again towards the end of the ebb. We set off on our walk knowing that Canna had been populated for 9,000 years. We wondered what we would find. 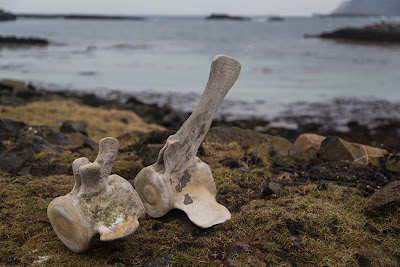 Near the causeway between Canna and Sanday we found these whale vertebrae... 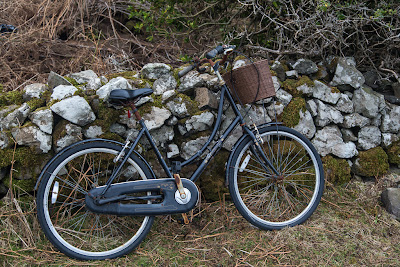 ...and this old abandoned bike. I wonder if its owner has left the island? 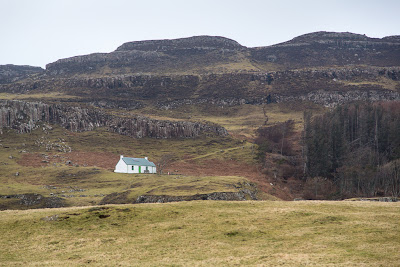 Canna is a volcanic island and the basalt ledges of its hills rise steeply from the shore. Sitting on its elevated ledge, Kate's cottage has one of the best views on the island. We got to chatting with two builders from the mainland. They were re-roofing a cottage which had recently burned down. The previous evening they had worked late to take advantage of the settled weather. From high on the roof they had spotted us paddling into Canna Harbour and news of our arrival had spread round the island. 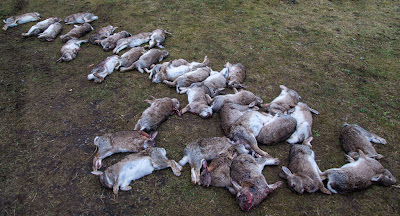 Near the farm buildings we discovered the reason for the midnight disturbance. It had been a rabbit cull. Since a successful operation to eradicate rats (to preserve breeding bird stocks) the rabbit population of Canna has mushroomed. They breed like...well rabbits actually. 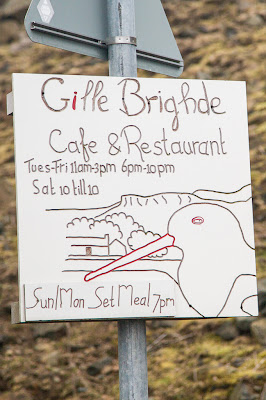 Last year the restaurant on Canna did a nice line in rabbit pie and I am sure that was nothing to do with its recent closure. 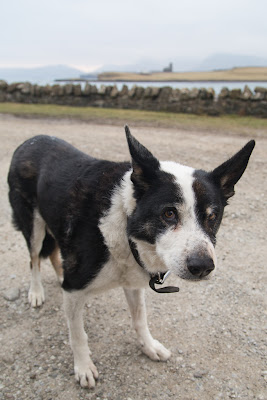 This lovely old farm dog padded out to say hello. His hang dog appearance suggested that it would be rabbit for dinner ....again. 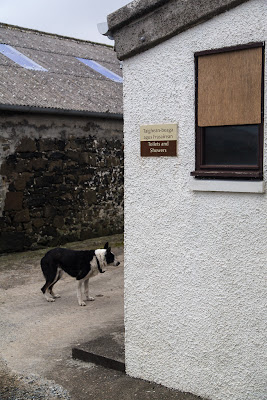 Next to the farm buildings is this convenient loo and shower. The shower requires a £2 coin. The National Trust for Scotland office is just across the road. We called by to present our NTS membership cards but no one was in. 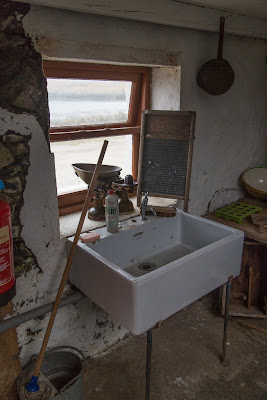 The old farm dairy has been converted into a museum displaying... 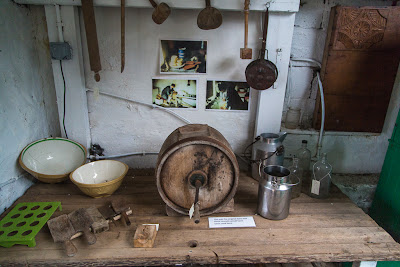 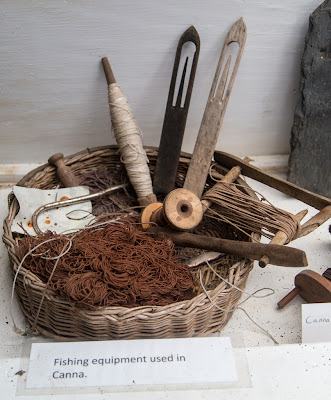 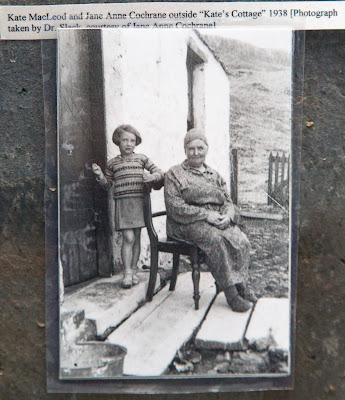 ...old photos (this is Kate sitting outside her cottage) and... 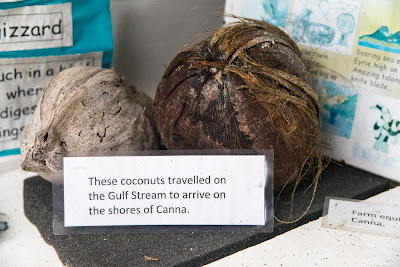 ...curiosities brought to Canna by the Gulf Stream.

NTS via BBC
In 2012 the farm manager found an ancient cursing stone in the ancient graveyard  above the farm.

NTS via BBC
Amazingly it was a perfect fit for the hollow which had been worn in the base of the Celtic Cross which stands nearby. 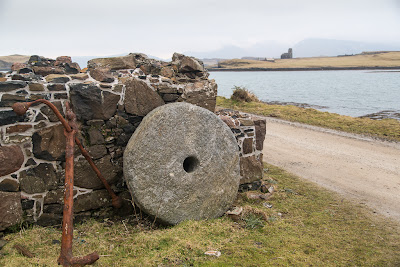 Just to the east of the farm is the ruin of the old corn mill. It was built in the 1780's and was originally water powered but was converted to steam at a later date. 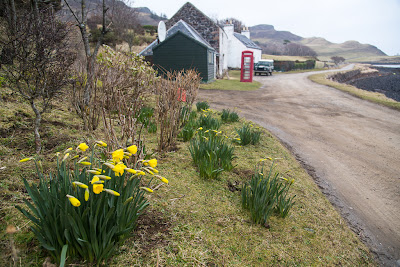 We now continued our perambulation along the front at Canna Harbour. There was no mobile phone signal on Canna so we were pleased to find... 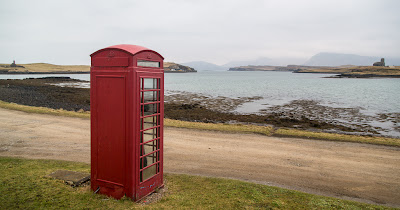 ...a public phone box with one of the most marvellous views in the country. Inside, it didn't smell like a city call box either. 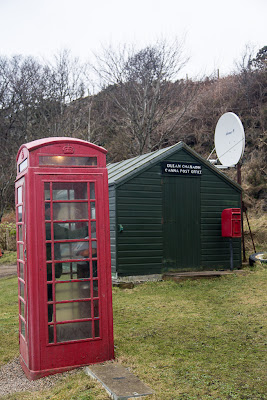 It was fully functioning and accepted a variety of coins. Its signal was beamed by communications dish to feed into the rest of the World's telecoms network! We phoned home for a weather forecast and to book a room in the Rum hostel for later that night. 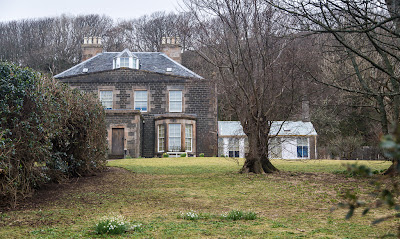 Next we passed Canna House. It contains a large library of Gaelic books and butterflies collected by the last private owners of Canna, Dr John Lorne Campbell and his wife Margaret Fay Shaw. In 1981 the National Trust of Scotland was gifted Canna by the Campbell family. 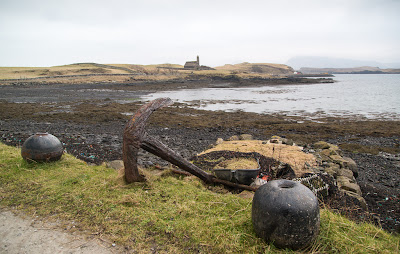 We continued along the shore road towards the Protestant church but our attention was... 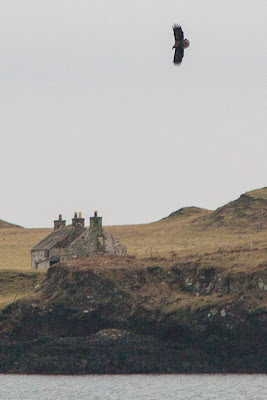 ...captured by a sea eagle circling over Canna harbour. When you see a sea eagle like this, there is no mistaking it for a buzzard. No doubt the sea eagle also has rabbit for first second and third luncheons. 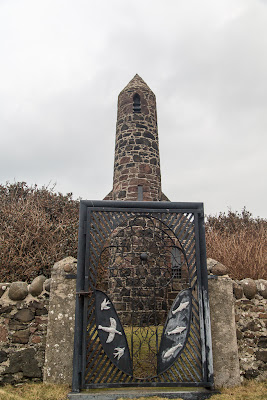 The Protestant church has a round pencil tower which is not common in Scotland but is frequent in Ireland. It was built in 1914 in memory of Robert Thom, a Clyde shipowner who bought Canna in 1881 and who did much to improve the island until he died in 1911. It was designed by Peter Chalmers who had built a similar church in the parish of Kilmore at Dervaig on Mull. 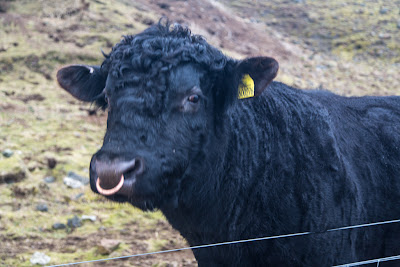 As we approached the pier we passed this fine bull. We saw a surprising number of breeds and crosses on Canna and Sanday: Aberdeen Angus, Luing, Belted Galloway, Highland and Shorthorn. 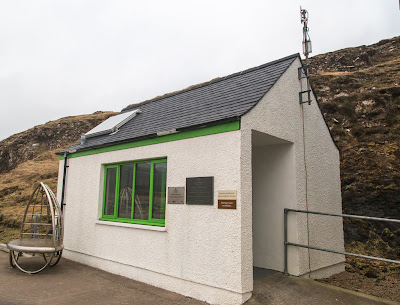 The Canna terminal building at the pier  has a toilet and water supply. 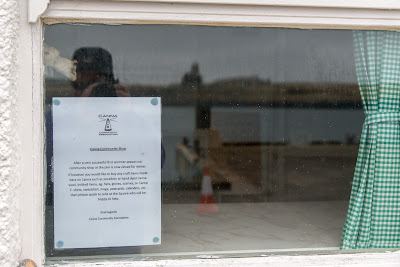 Nearby the old terminal building has now been converted to the community shop. 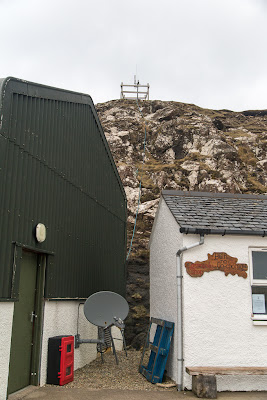 Between the shop and the pier warehouse we found a number of dishes and radio links that are part of the HebNet system that brings broadband to Canna and the other Small Isles. 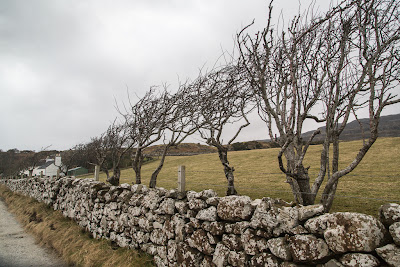 It was now time to think about heading back to the kayaks. This old hedge tells its own story of how windy Canna can be. However, we were grateful that the wind had delayed our departure and allowed us to explore this delightful island. Sadly the population has recently fallen to 10 after all the families with children left. I do hope others will arrive to take their place and hopefully they be able to stay. Canna has had a wonderful past, I hope it has a future.