The guiding light of Ardnamurchan as seen from Coll. 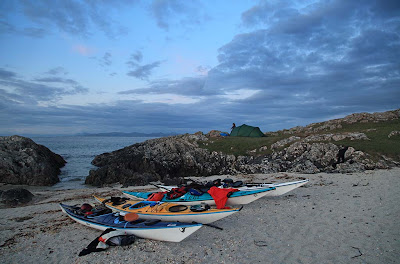 It was nearly 22:30 by the time we found a suitable breach in Coll's impregnable NE coast. A narrow gully led to a shell sand beach with level machair beyond. In conditions of a northerly swell it would have been a trap but the weather was forecast to be fair the following day. 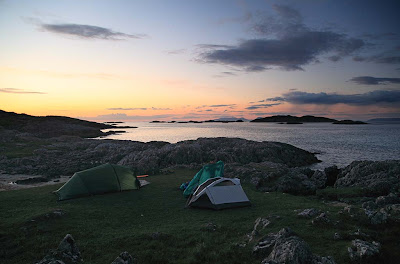 As darkness was falling, we put our tents up on the perfectly level machair above the beach. 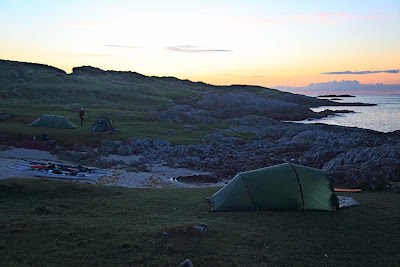 Unfortunately, any time we approached the boats, we heard the alarm calls and saw the fluttering flight of a pair of ringed plovers. Then we saw their tiny black and white chick, camouflaged on some dried black seaweed in a hollow in the white sand. We wondered about moving on but it was nearly dark, so we moved the kayaks away from the chick and took our cooking stuff over the rocky headland, well out of its way. 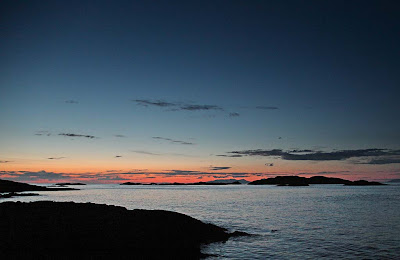 The sky to the north glowed red well after midnight, until the distant hills of Rum became confused with the outlines of the nearby Cairns of Coll. 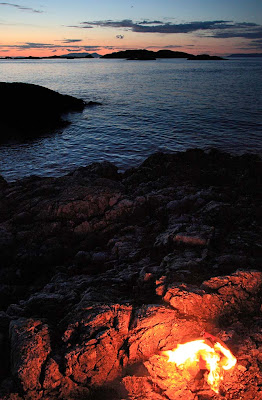 We lit a small fire with the logs we had bought in the Tiree Co-op shop and were soon tucking into a supper of hot-dogs with mustard and rolls, courtesy of Jim. We felt replete. Despite all the paddling, we had still managed to squeeze an appropriate number of meals into what had been rather a long day. 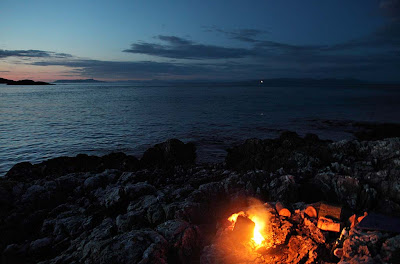 A peaty Islay malt was the perfect companion to the warmth and smoke of the fire. As we chatted away, every 20 seconds, the steady double flash of Ardnamurchan lighthouse reminded us that tomorrow would be our last day. The lighthouse lay 15km away to the west and Ardnamurchan is the most westerly point in the British mainland. It felt very satisfying to have been able to explore these western isles of Coll, Gunna, and Tiree by this route.