Tides, blow holes and rock gardens on the west coast of Iona 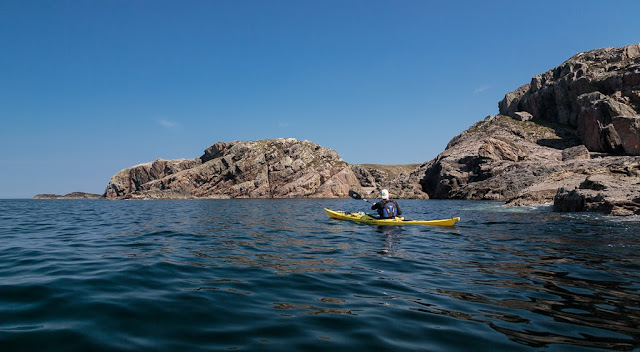 We were now paddling north up Iona's west coast. Grey slabs of gneiss dip into the Atlantic forming... 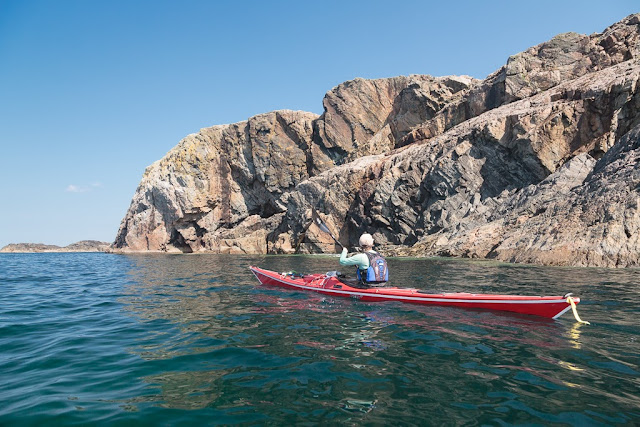 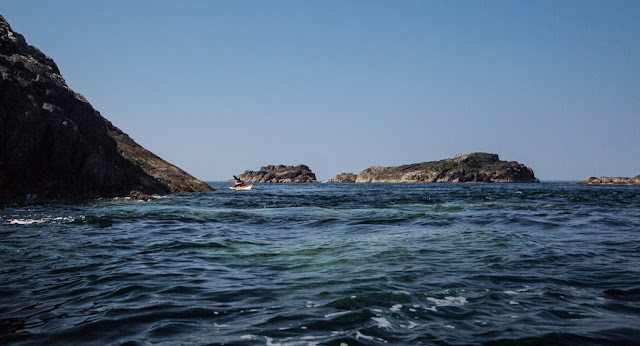 The ebb tide was now running against us and inside Stac an Aoineidh (steep stack) we had to paddle rather hard but... 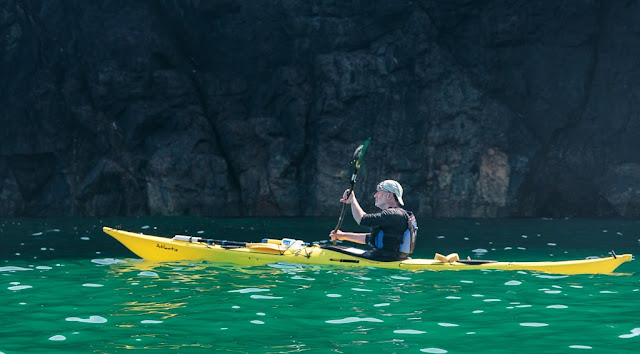 ...we were soon back to more relaxed steady paddling until we came to... 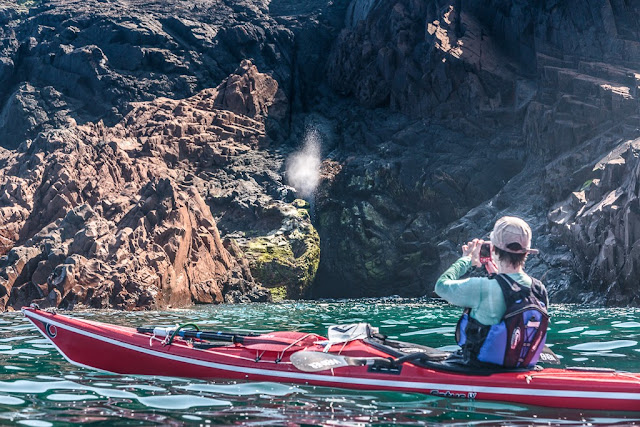 ...the Spouting Cave which was heard well before we saw it. The cave is a blow hole and was in fact breathing very gently when we passed by. It must be awesome in a storm. 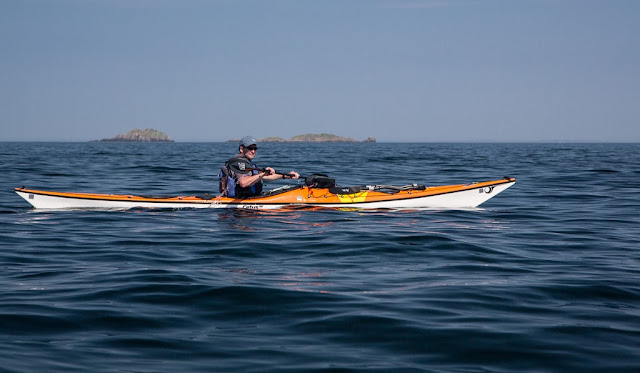 After leaving the booming Spouting Cave behind, we continued along the coast while... 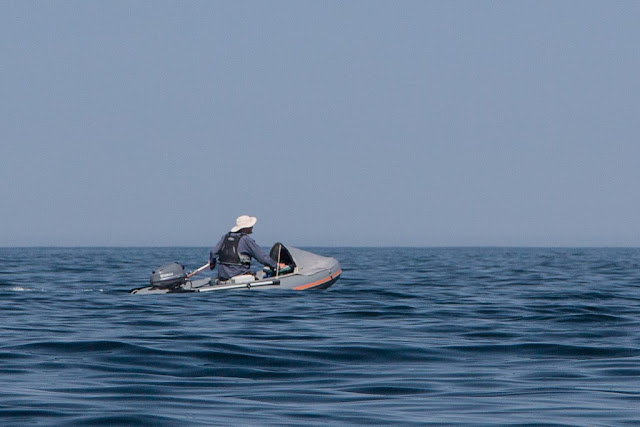 ...Donald zoomed off to explore some offshore reefs in his F-Rib. 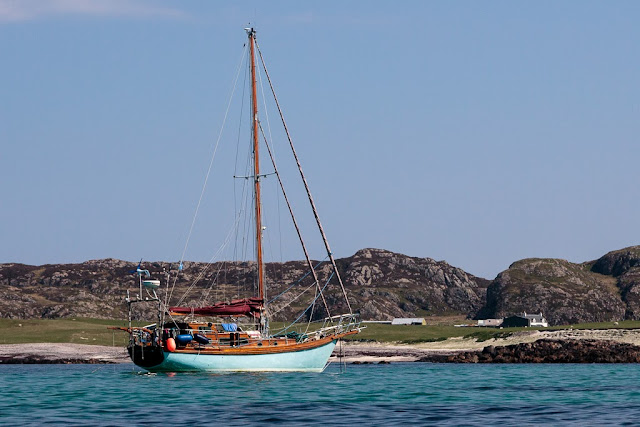 At Port Ceann na Creige (port of the rocky headland) we came across this beautiful wooden yacht, Wild Rose. We had seen her the previous evening anchored at Tinker's Hole on the Ross of Mull. 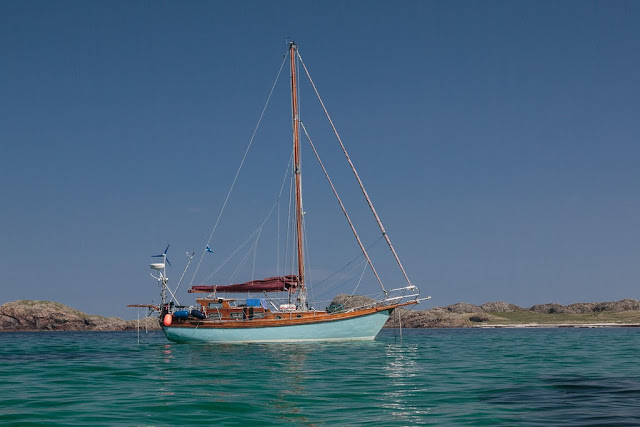 I have passed Wild Rose quite a few times on my travels and have seen her moored at Carsaig Bay and also Tayvallich. The owner is obviously a proper sailor. Not only is she beautifully maintained and fitted out but this bay is a rock garden. Wild Rose's davits were empty and her dinghy was by the shore. Talking of which, it was about time we stretched our legs on the shore...
Posted by Douglas Wilcox at 3:35 pm 2 comments: 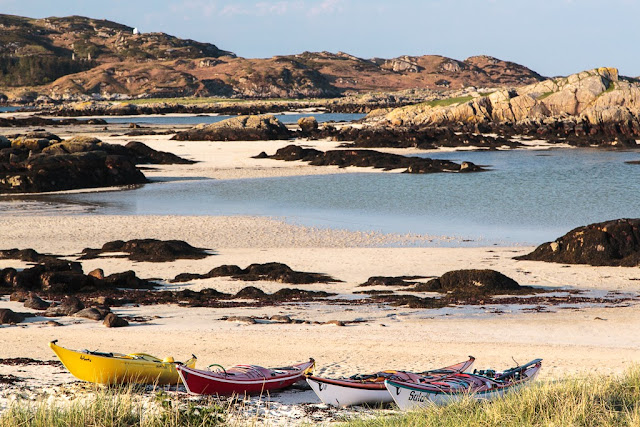 On the second day of our trip to the Ross of Mull and Iona we awoke  to a splendid morning at Fidden. Actually we had been awake for some time. There was an order to the ornithological choir that entertained us through the night. The drumming of the snipe had started before we went to bed only to be followed by the rasping repetitive call of the corncrake which was interrupted only by the equally repetitive call of the cuckoo at first light but thankfully dawn brought the more subtle calls of the meadow pipit and skylark. It was wonderful. 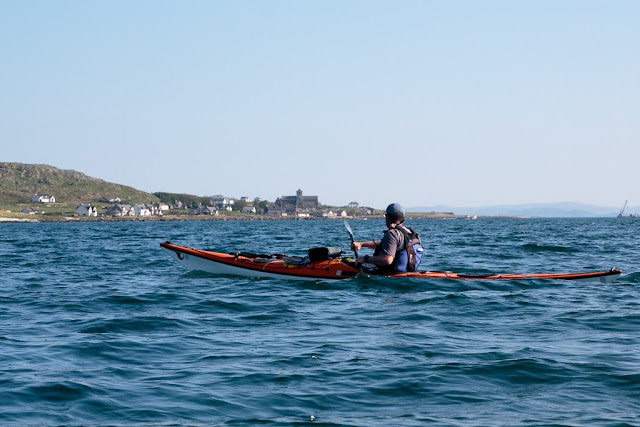 We set off across the Sound of Iona with the Abbey of Iona on the horizon. Iona is a place of pilgrimage for hundreds of thousands each year. Most pilgrims think that it was St Columba (521 to 597) who first brought Christianity to Scotland when he landed in Iona from Ireland in 563. However, this is nonsense as the earliest Christian relic in Scotland is the Latinus stone at Whithorn in Galloway. It dates from about AD 450. Whithorn was established by St Ninian (c.360-c.432) in 395 which predates the introduction of Christianity to Ireland. Columba had been effectively exiled to Scotland after copying St Finian's Latin bible and starting the Battle of Cúl Dreimhne which resulted in  the death of 3,000 people. However, the religious settlement founded by St Columba on Iona went on to serve as a beacon of Christian learning and spread enlightenment through both Scotland and Ireland. Indeed the famous Book of Kells in Ireland which is described as "Ireland's greatest cultural treasure and the world's most famous medieval manuscript" was actually made in here in Iona in Scotland!

Starting in 795 Iona suffered repeated sacking by the Vikings and some monks escaped with the Book to Kells in Ireland. What is less well known is that in 1204 the bishops of Tir Eogain and Tir Connail and the abbots of Derry and Armagh sacked Iona and razed it to the ground as they resented its continuing influence over the church in Ireland and its popularity as a religious shrine for pilgrims. They wanted the pilgrim business for their own shrines so they then spread propaganda that Iona had been a simple satellite of the church in Ireland and this misconception has lasted down the centuries, particularly in Ireland. 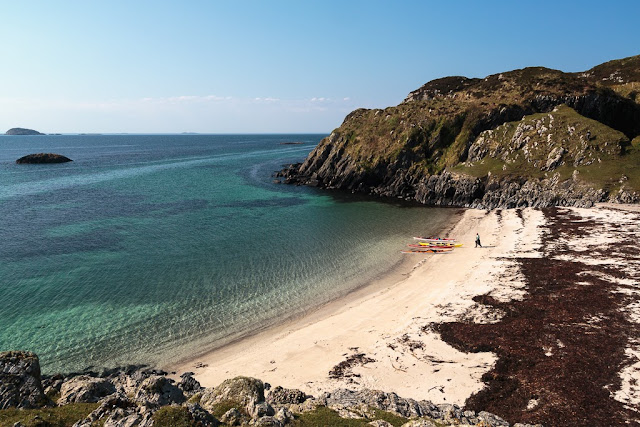 Whatever your reasons for visiting Iona you will fall in love with the place as soon as you set foot there. We landed on on this glorious shell sand beach on the SE coast. 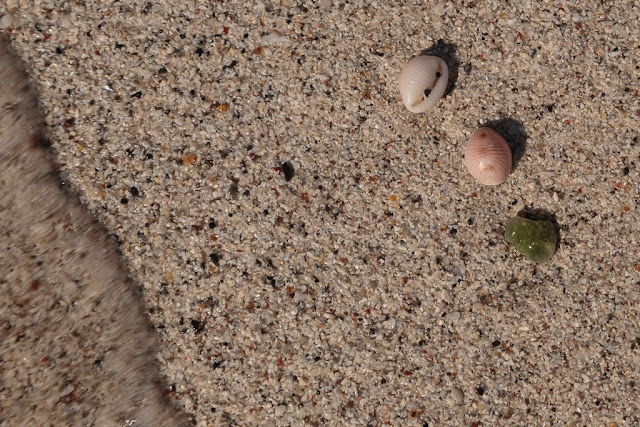 We could not resist beachcombing and I was delighted to find two cowries and a small pebble called a "St Columba's tear". It is green translucent serpentine marble. They are quite hard to find these days as every visitor to Iona wants to find a piece. 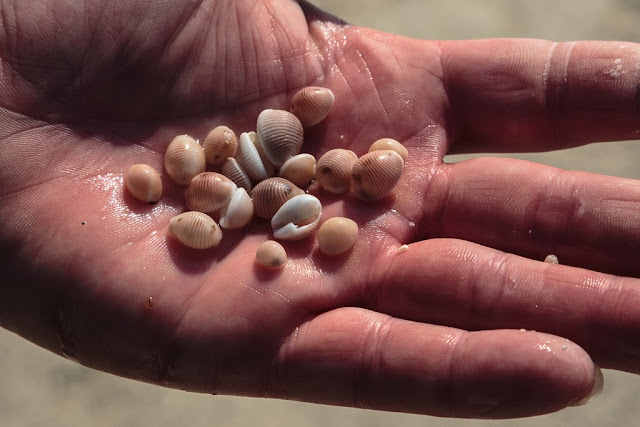 Ian has the best eye for cowries I know...this was his haul! 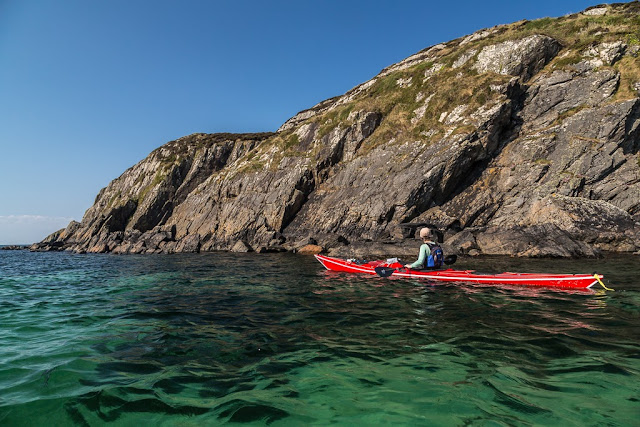 It is not just the Iona marble that is green... 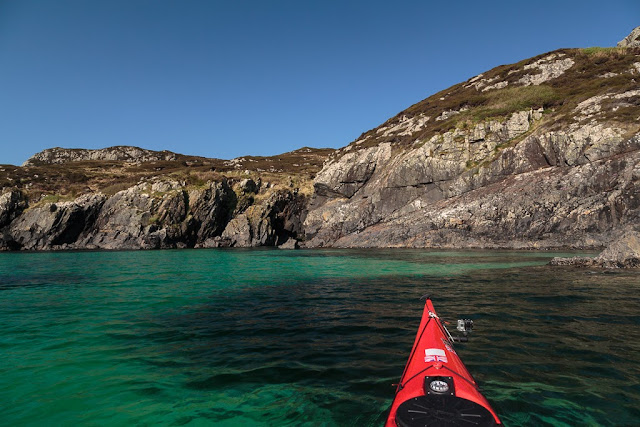 ...the seas round the dark rocks of Lewisian gneiss are also... 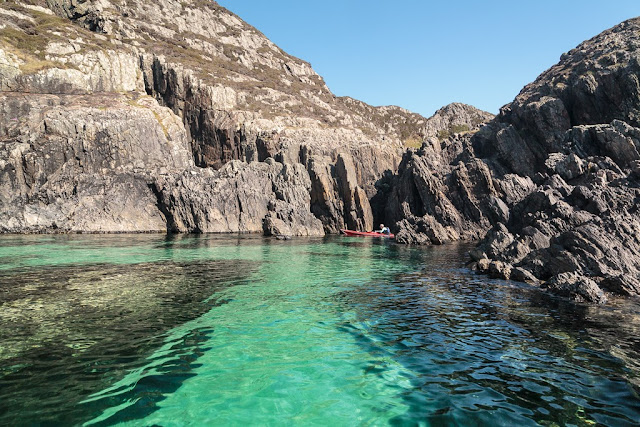 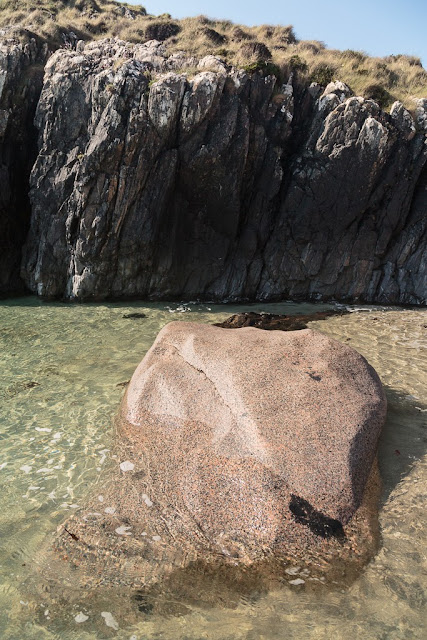 This pink boulder of Ross of Mull granite is an erratic, brought across the Sound of Iona by ice during the Ice Age. This is not the only place we have encountered an erratic from the Ross of Mull. We recently found one on the Mull of Ross on the Solway coast. 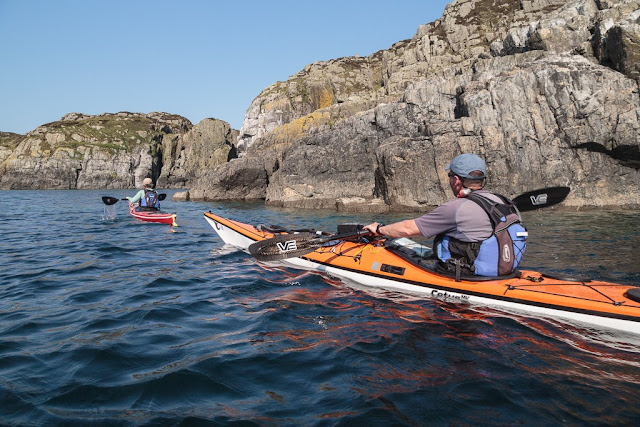 Thy dark grey of the Lewisian gneiss on the... 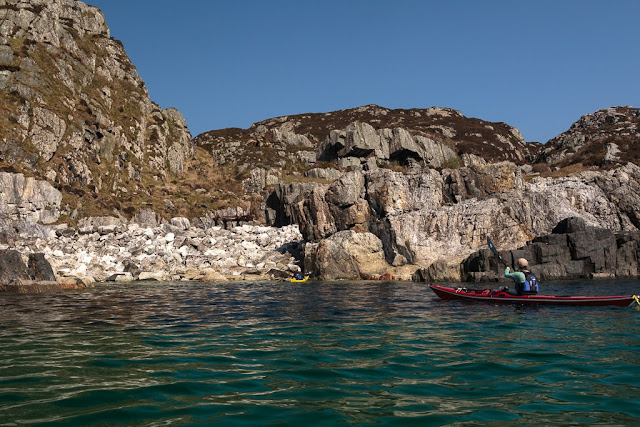 ...south coast of Iona is quite a contrast to the pink granite of the Ross of Mull which is less than 3 miles to the east. We came to a gully where lighter metamorphic rocks have been forced through the surrounding gneiss. This is the Iona marble which was quarried and used in the building of churches across the world. Rusting machinery can still be seen above the rocks.

The complex and varied geology of Scotland... 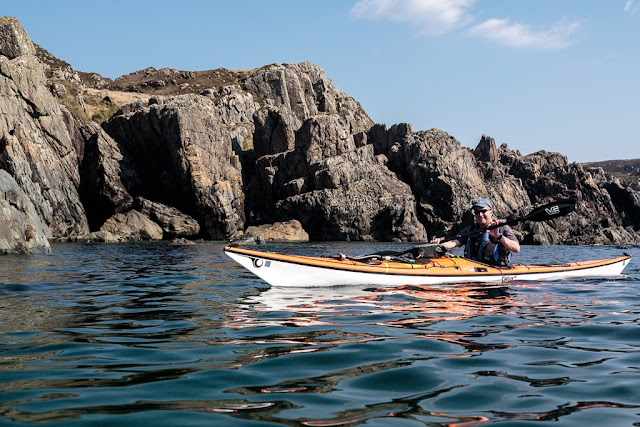 ...is one of the reasons it is so good for sea kayaking. 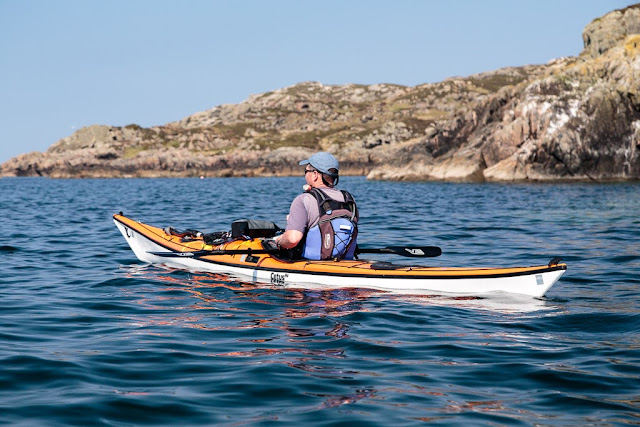 We had now reached the southernmost point of Iona at Rubha na Carraig-geire (headland of the sharp pinnacle) where...

...we turned to the west and came upon Port na Curaich (port of the coracle). This is where St Columba is reputed to have first set foot with 12 companions on Iona in 563. He reputedly climbed a knoll and looked back towards Ireland. When he had reassured himself that Ireland could no longer be seen he turned his back to that land and settled on Iona where he would atone for his previous sins with a life of piety.
Posted by Douglas Wilcox at 3:35 pm 6 comments: