Blood on the rocks and a murder at Appin. 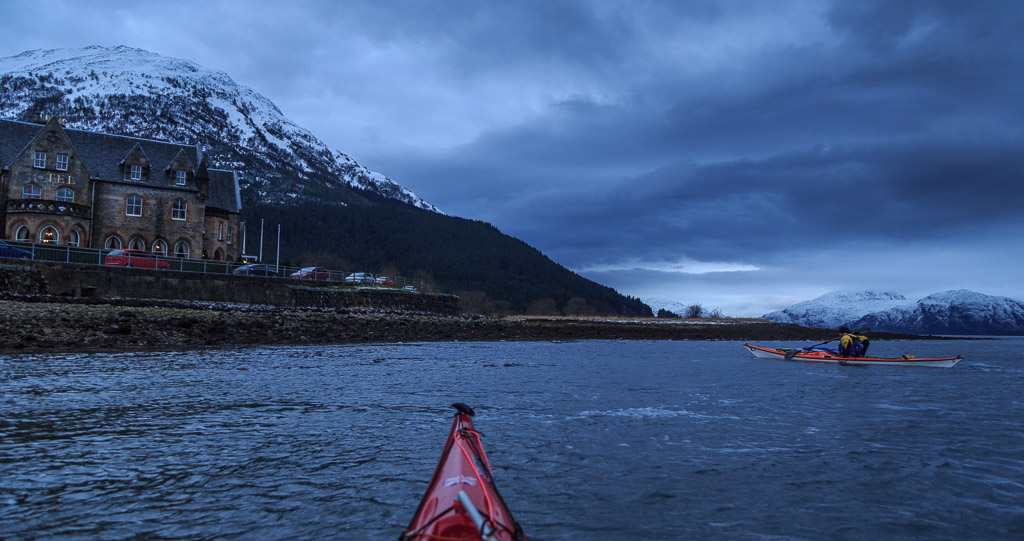 We launched in the pre-dawn light from the slipway near the Ballachulish Hotel. 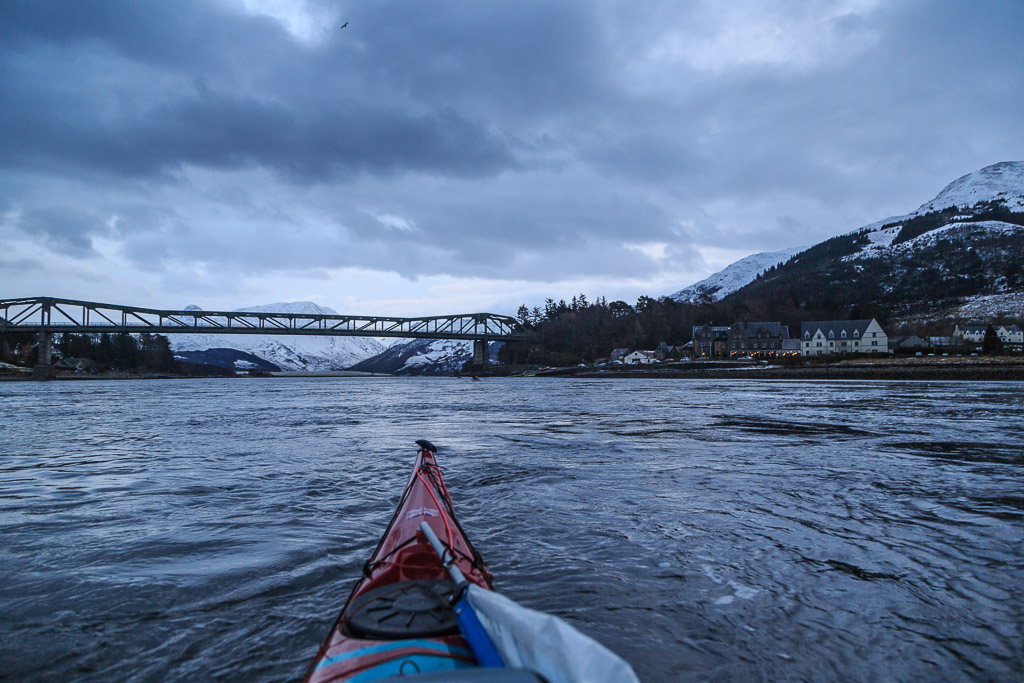 Below us the ebb tide was kicking out through the narrows at 12km/hr. It was rather surreal travelling backwards at this speed as the land whizzed by. The cloud cover meant that it was a good bit warmer than our first days's trip to Kinlochleven. 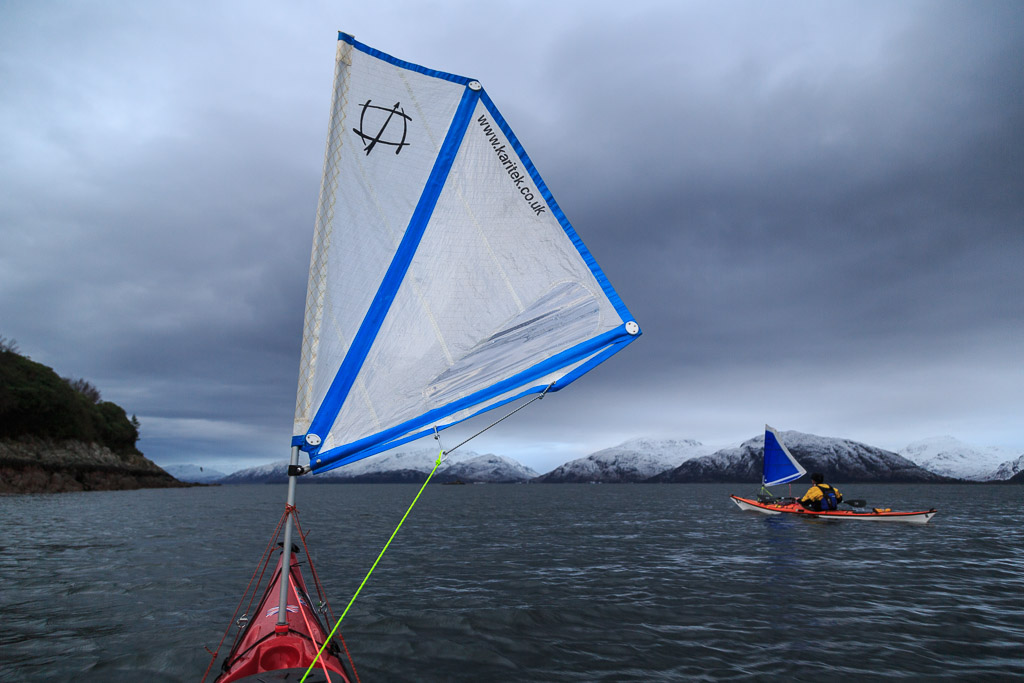 A decent easterly wind  sprung up and so the sails were unfurled to help us speed our way into Loch Linnhe. Wind with tide gave fast progress on flat water and... 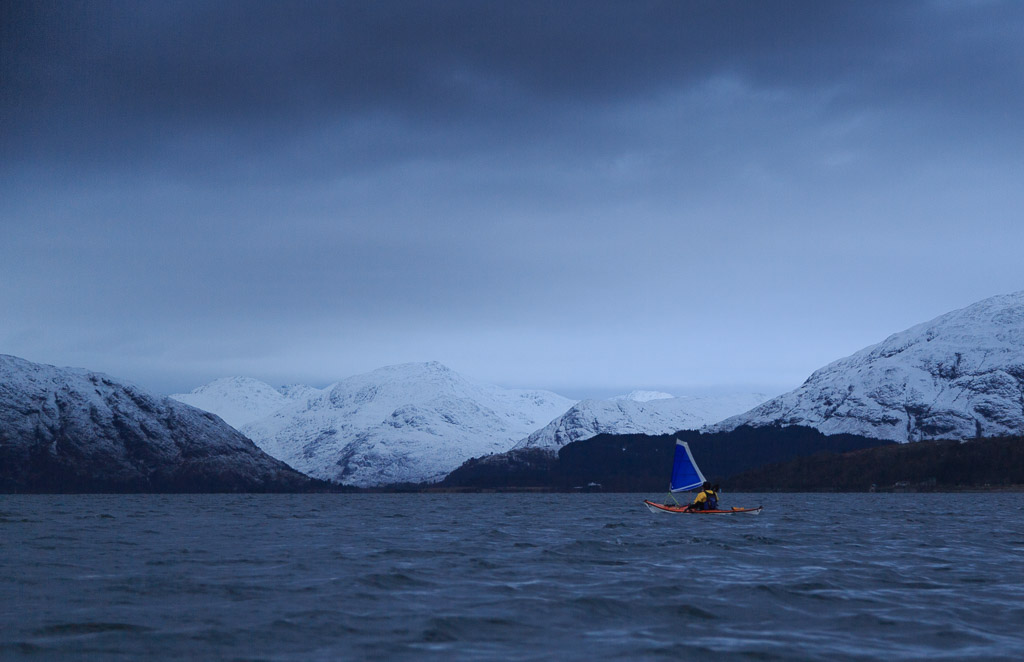 ...soon the mountains of Ardgour then...

...Morvern dominated our view to the west. As the sun rose, the temperature did rise and it was noticeable how the snow had thinned overnight.

We were paddling down the south east side of Loch Linnhe, past Ardsheal Hill which we had climbed two days before. 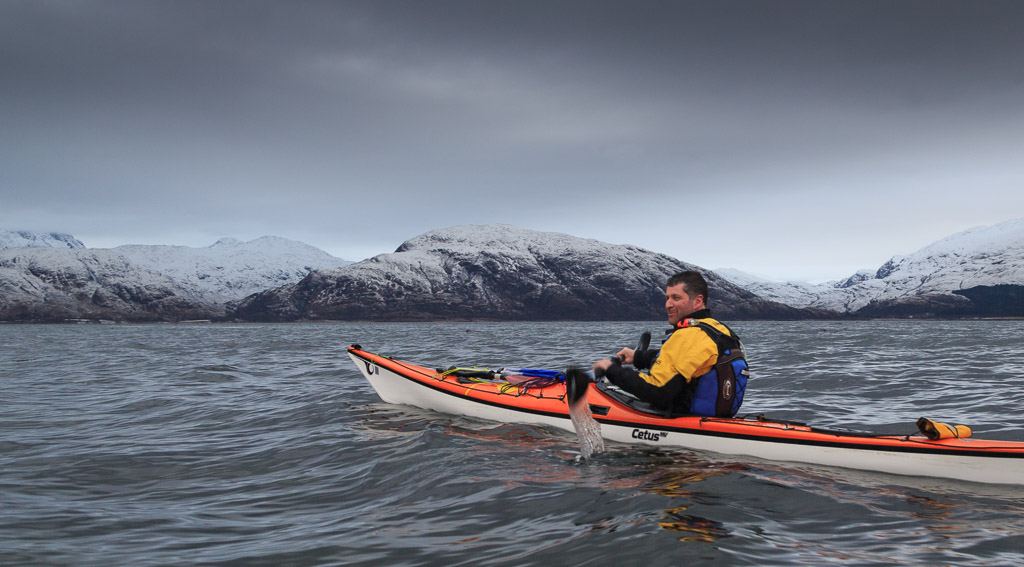 Gradually we encountered a SE headwind so we... 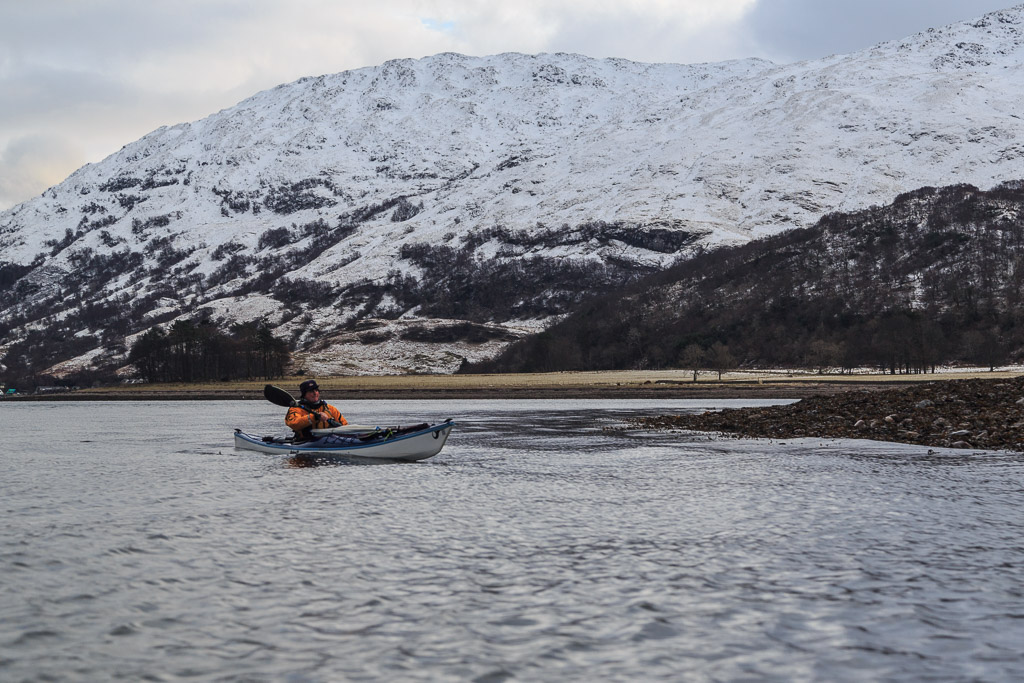 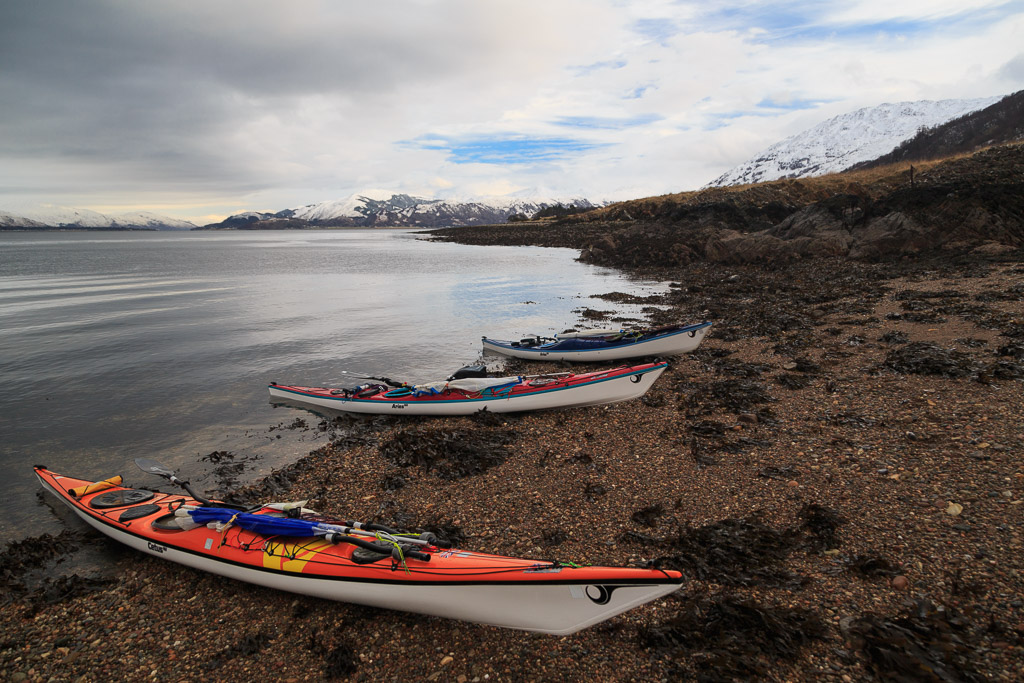 ...we came across a sheltered NW facing bay where we... 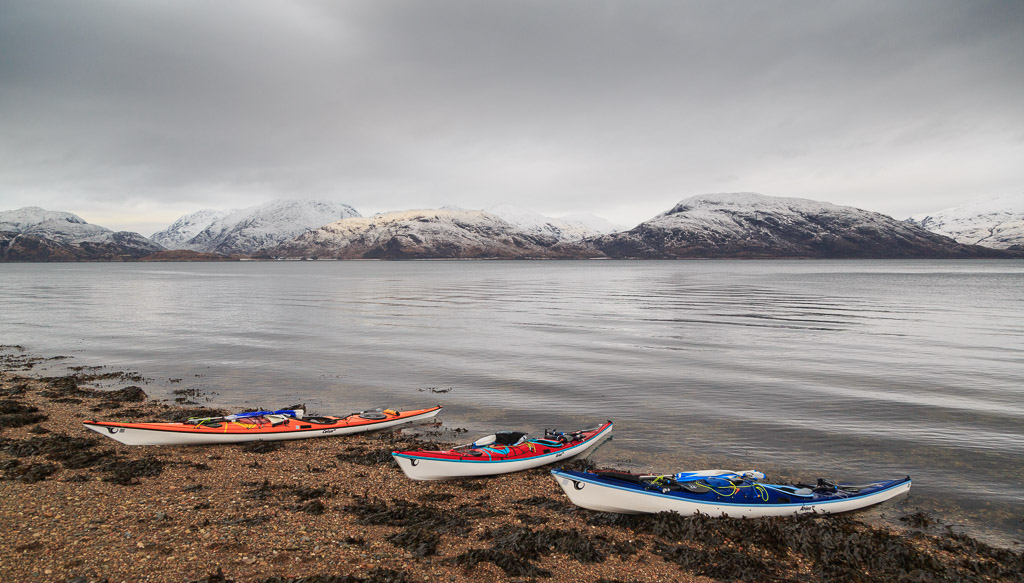 ...pulled up our kayaks on some remarkably sharp gravel. It was time for second breakfast. I became aware that one of my fingers was leaking quite a lot of blood but I hadn't felt a thing as my hands were so cold. We had plenty of elastoplasts so for once I did not have to resort to duct tape.

Of course a few drops of my blood on the Appin shore were nothing compared with the real events that surrounded the "Appin Murder" which took place here in 1752, six years after the defeat of the Jacobite Rebellion at Culloden. Colin Campbell, a local laird and Hanoverian agent was travelling along Loch Linnhe collecting taxes from the Stewarts and evicting those who could not pay. Suddenly a shot rang out and he was killed. News travelled fast to London where both the government and the King feared a third Jacobite (Stewart) uprising. The Stewart chief, James of the Glen, was arrested and charged without a shred of evidence. He was sent for trial in Inveraray, the seat of the Campbell clan. The judge was the chief of the Campbell Clan and eleven out of the fifteen jurors were Campbells. Stewart was found guilty and hanged at Ballachuilish. It was one of the blackest days in Scottish legal history. 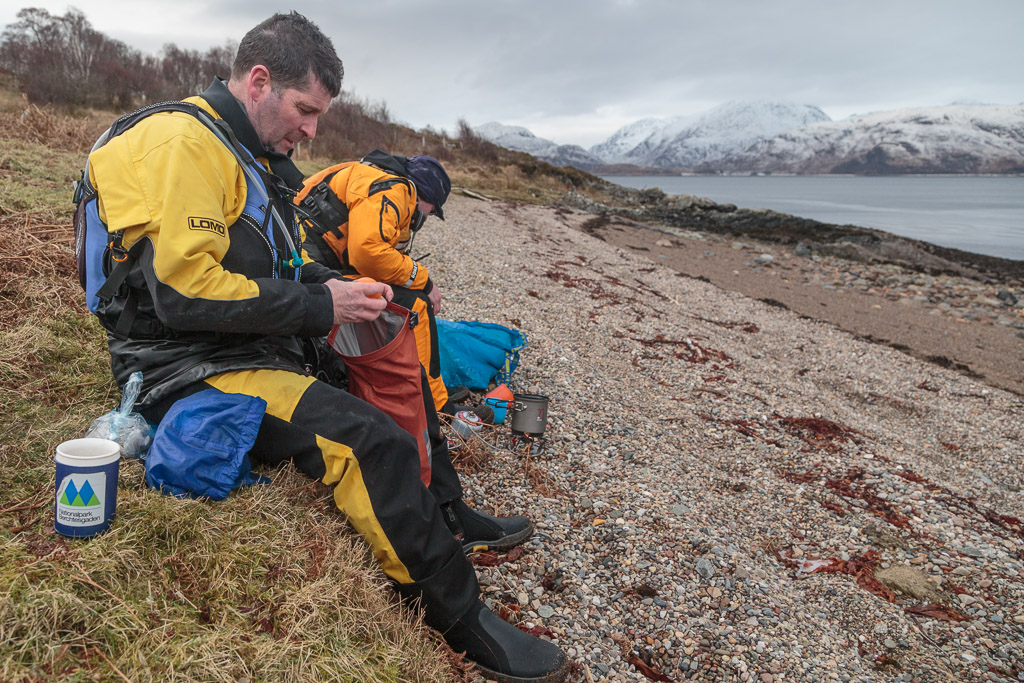 We found an idyllic sheltered bank with a... 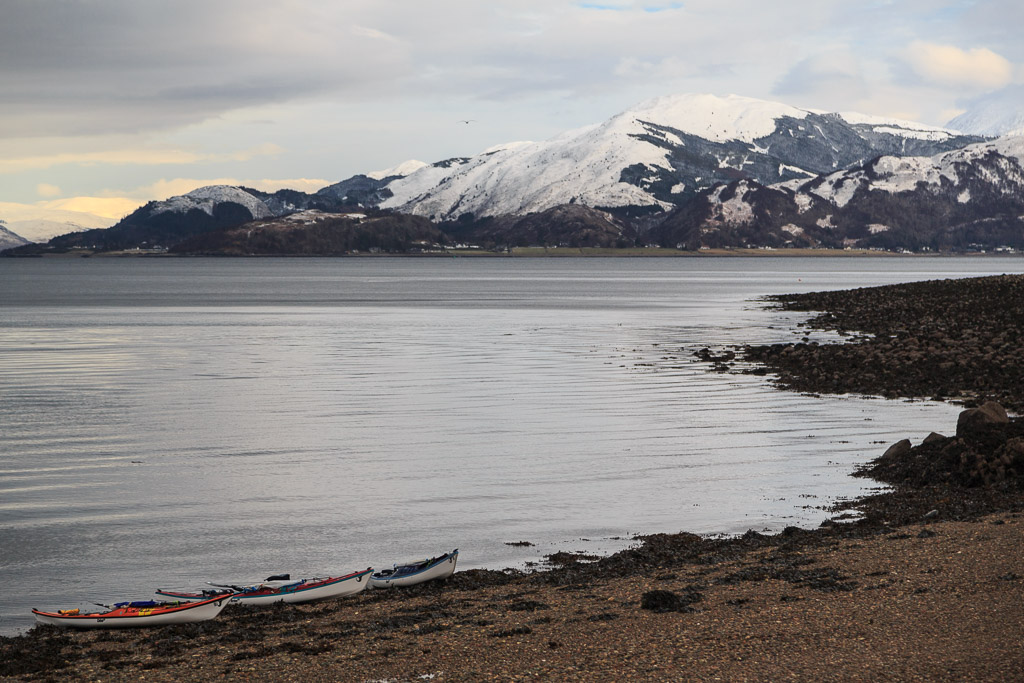 ...great view of the mountains and of... 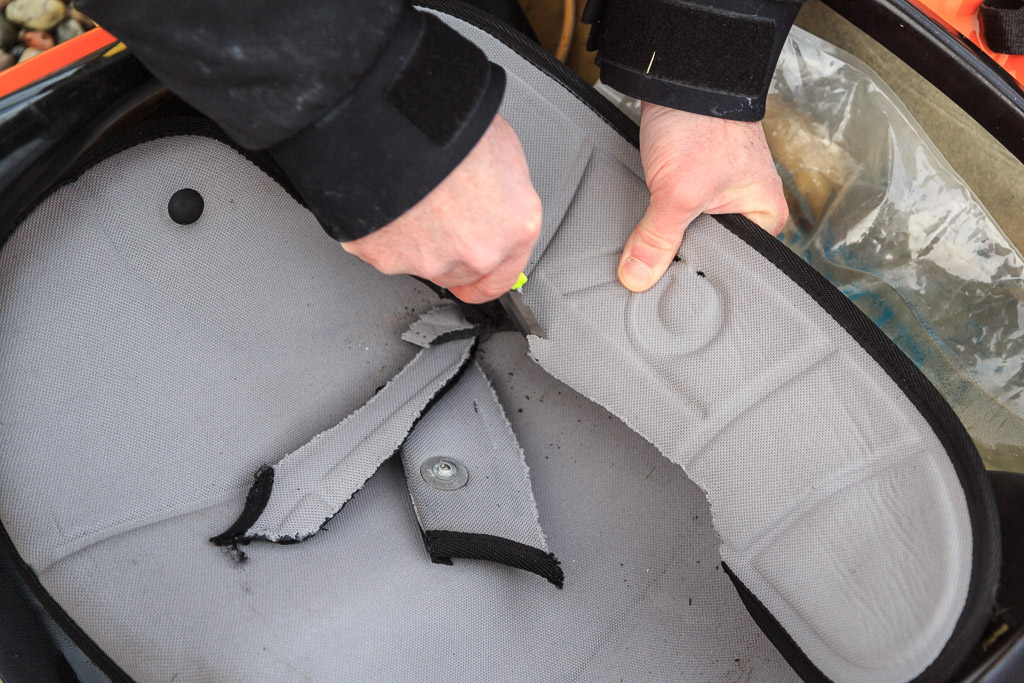 After second breakfast, Ian set about making the performance seat in his Cetus mv. The lower tab develops an uncomfortable crease that can be cured by cutting the tab completely off. 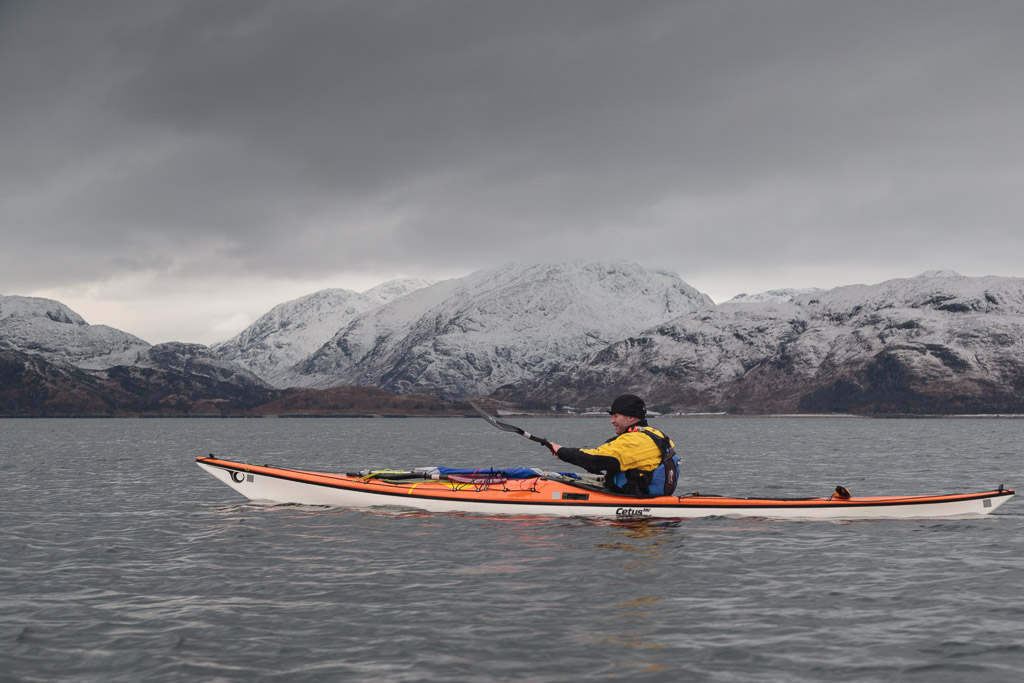 With comfortable posture restored we set off again down Loch Linnhe towards the northern end of Cuil Bay. We were momentarily distracted by a large dog otter munching a crab on the rocks. 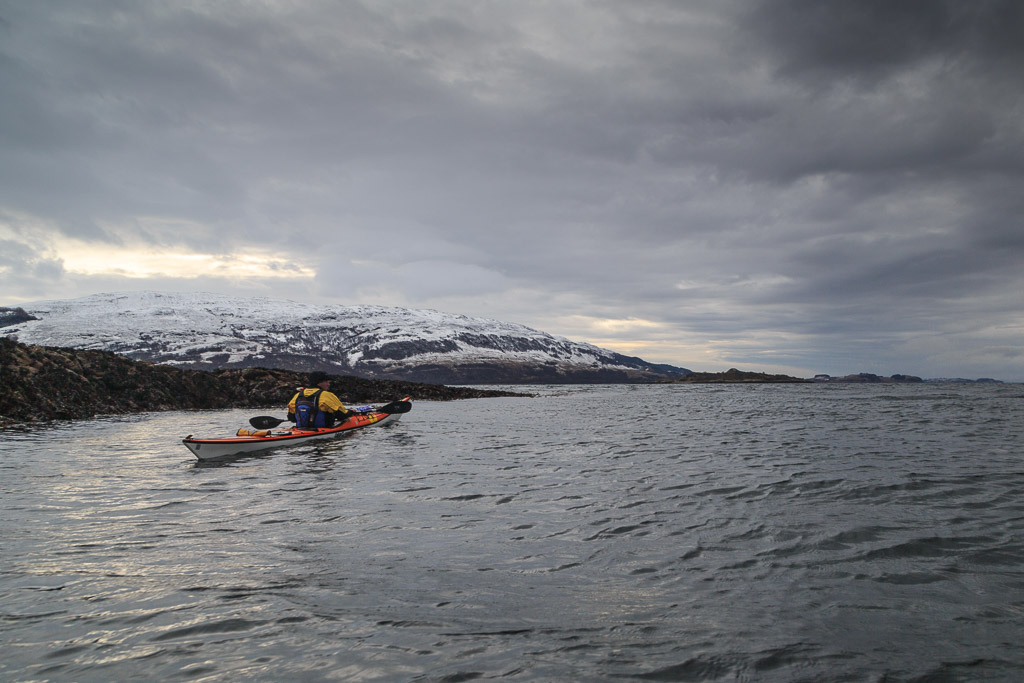 From the shelter of Rubha Mor we looked across Cuil Bay to our destination Eilean Balnagowan. The wind had got up from the SE to a good F4 gusting F5. It proved to be a lumpy crossing but... 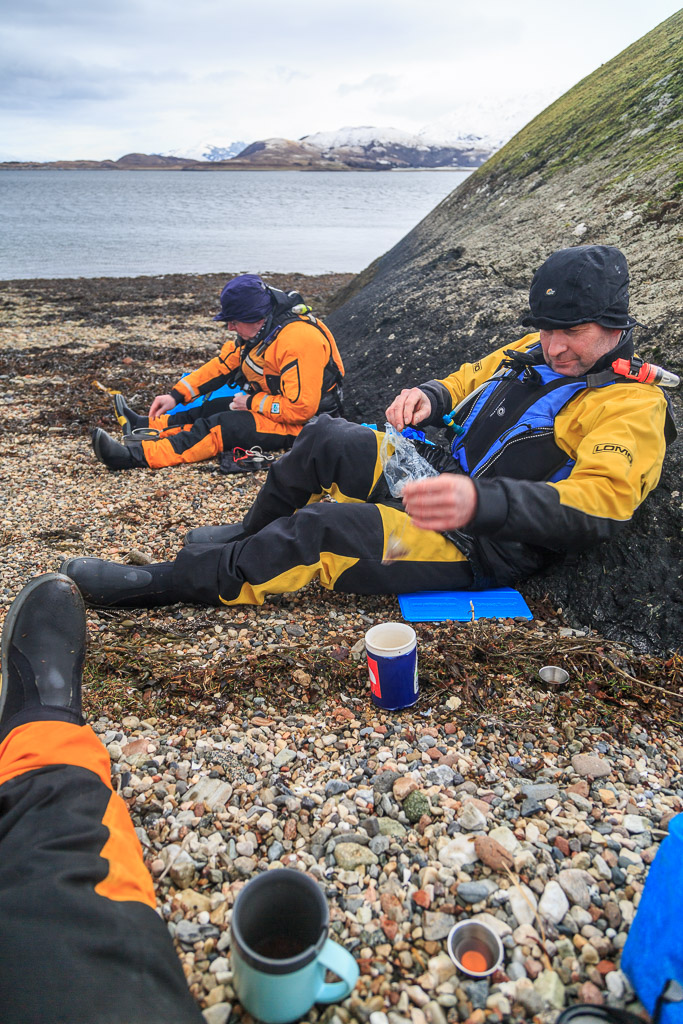 We found excellent shelter to go with the 15y old Dalmore that accompanied first luncheon. Despite its small size, Eilean Balnagowan has four shingle beaches. So it gives a sheltered location whatever direction the wind is blowing from. Neither Ian nor Mike had been before but I had paddled between Port Appin and Glencoe 6 years previously. I was surprised to discover a new pier, road and house on Balnagowan. The house was completed in 2014.
Posted by Douglas Wilcox at 10:42 pm No comments: