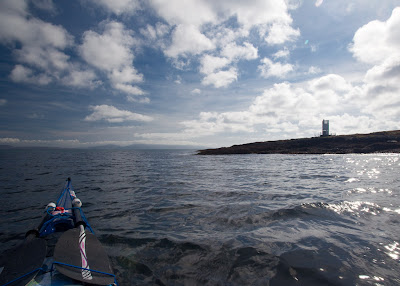 The day was by now pressing on so we reluctantly left the shelter of Scalasaig's little Port na Feamainn (seaweed harbour). We rounded the low headland of Rubha Dubh with its automatic lighthouse. It flashes every 10 seconds showing a white light to the east and a red light to the north. 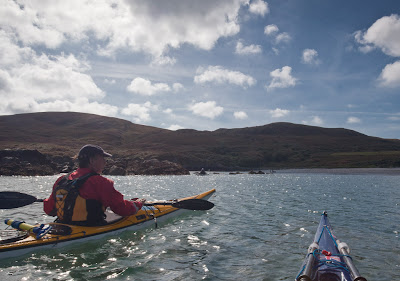 We now entered Loch Staosnaig and paddled round Eilean Staosnaig at its head. Gentle hills rolled down to a raised beach which is now covered by farm land. It looks such an unspoiled scene but it was once the scene of food processing on an industrial scale! These white sands have been a landing point for our ancestors for at least 9,000 years. 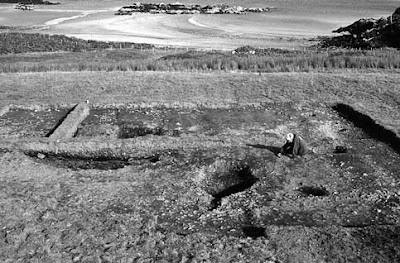 In 1994 an archaeological dig on the raised beach revealed a large (4.5m diameter) pit, which was full of burned hazel nut shells. 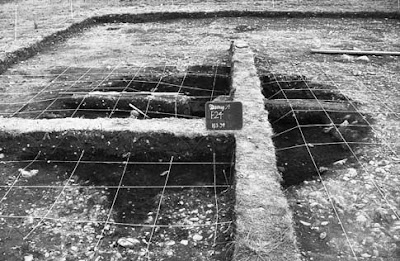 In 2001 Mithen et al published a paper in which they dated the shells to approximately 9000 years ago. They also studied pollen from sediments in a nearby loch and discovered that the hazel nut pollen had all but disappeared over one season. It appears that our hunter/gatherer, Mesolithic ancestors had arrived on Colonsay and cut down the hazel trees, gathered all the nuts then processed them by roasting in this pit. 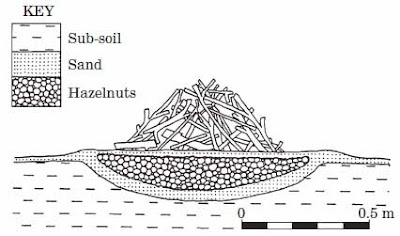 This is a diagram of how the pit would have been used.