Introduction
Since taking up sea kayaking I have found a trolley to be one of the best pieces of kit to avoid back strain. There are two basic situations in which you may wish to use one: transporting your kayak from your vehicle to the sea or carrying with you on your expedition to negotiate land (or sea) barriers or to get on and off ferries.

In the first situation a trolley will help if:


Generally you will leave the trolley in your car so its size is not too crucial.

The second situation involves taking the trolley with you on your kayaking trip. This requires the trolley has some folding mechanism or can be dismantled. If you do not want the trolley on deck, small size is crucial to fit your hatches. On a kayaking trip you can use a trolley to: 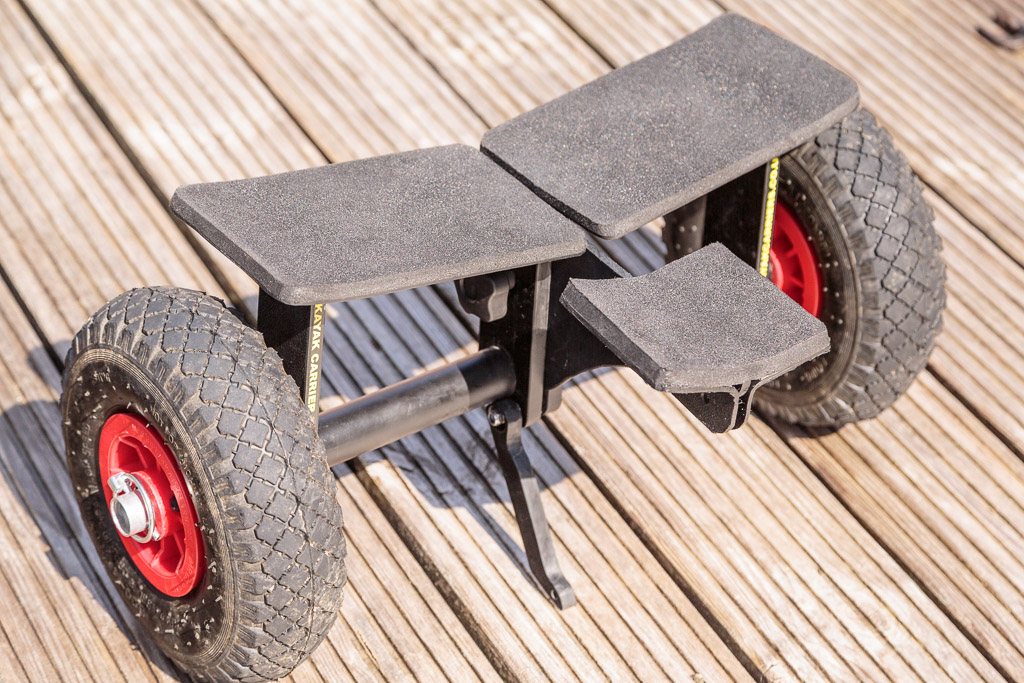 KCS Expedition trolley
This is the new KCS Expedition trolley. The original KCS team consisted of Ronnie Weir in design and manufacture and the late Mike Thomson of Scottish Paddler Supplies in retail.  At Mike's funeral I met Ronnie and told him I hoped he would continue the business but Mike's death and Ronnie's other business commitments meant that KCS products disappeared from the scene. Then last year, it was with great pleasure  that I heard Ronnie was to restart KCS. He then asked if I would like to make any suggestions to improve the kayak trolley.

I had tested the original KCS dual purpose trolley/loader in a group trolley test for issue #2 of Ocean Paddler magazine in 2007. The trolleys were put through their paces carrying fully loaded sea kayaks on the rough 2km with 24m ascent  4x4 track across Jura from East Tarbert to West Tarbert. The KCS dual purpose trolley/loader ended up making several crossings as it had to return to pick up two of the other kayaks whose trolleys had broken. However, though tough, the KCS was not perfect. Its wheelbase was too narrow and its supports too high and so it tended to fall over when traversing a gradient or when one wheel hit a rock. It also had a tendency if a wheel hit a stone for the hull supports of the trolley to twist forward allowing the hull to drop onto the wheels. Even if this did not happen the trolley would twist sideways then crab behind you. Under load, especially on a traverse, the axle supports tended to work their way together making the wheelbase narrower and the trolley more unstable. It had no support stand so took two people to put a loaded boat on it. Lastly though it was compact when disassembled compared to other trolleys, there was still room for improvement! However, I thought the KCS trolley was so good that I bought two at full price soon after I started sea kayaking in 2002.

During our phone call last year, I fed my ideas back to Ronnie who was very open to suggestion. He said he was not only going to improve the dual purpose trolley but was going to develop a new KCS Expedition Trolley incorporating my ideas. It would have a stand, be lower, have a wider wheel base, be made of stronger gauge  polypropylene, have an extra hull support to prevent the trolley twisting forward and sideways and finally pack away to a smaller size! It sounds like all my wish list items had been answered! Soon after Ronnie delivered a prototype with the instructions "test it to destruction!" This shows the prototype during testing of the new keel support. (The angle of the support has since been adjusted.) 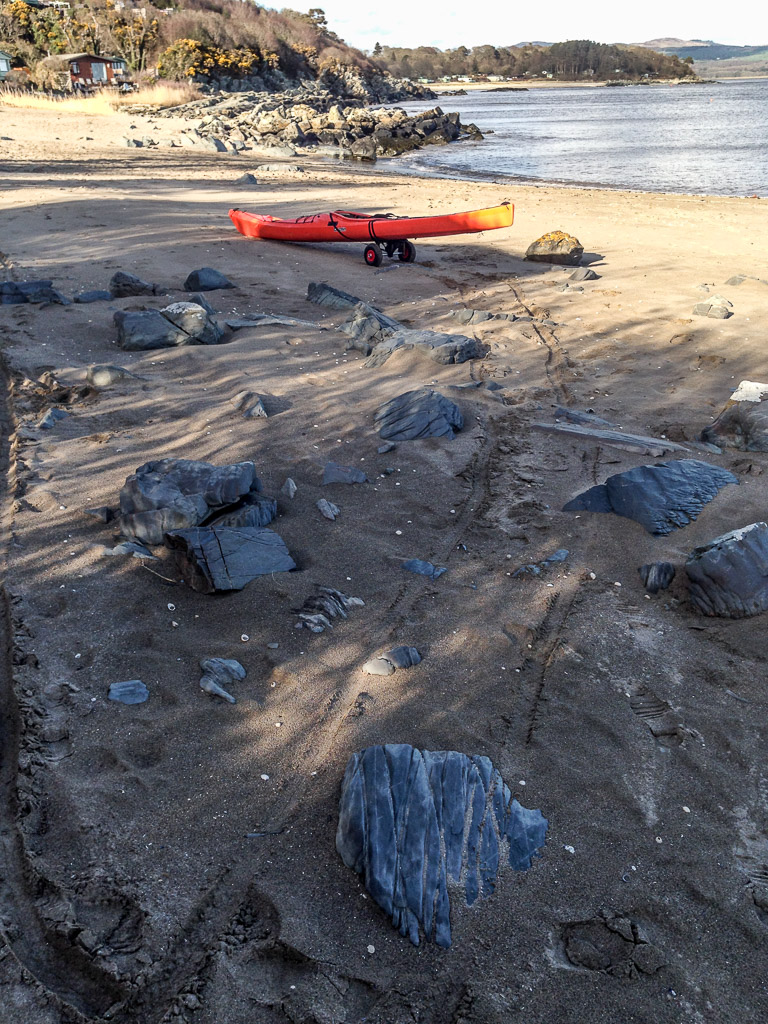 This ground at the Solway was an ideal proving ground  to test the new trolley keel support when the wheel hit a small rock and... ...also how stable it was when tipped. With the keel support fitted the hull support has not slipped forward. One other thing that improved was that the wheels stayed much more parallel with the centre line of the boat, even after one wheel hit a substantial rock. On the original trolley if you hit a stone with one wheel the trolley was likely to twist then it would crab out sideways behind you which would be dangerous if any vehicles were about on a road, 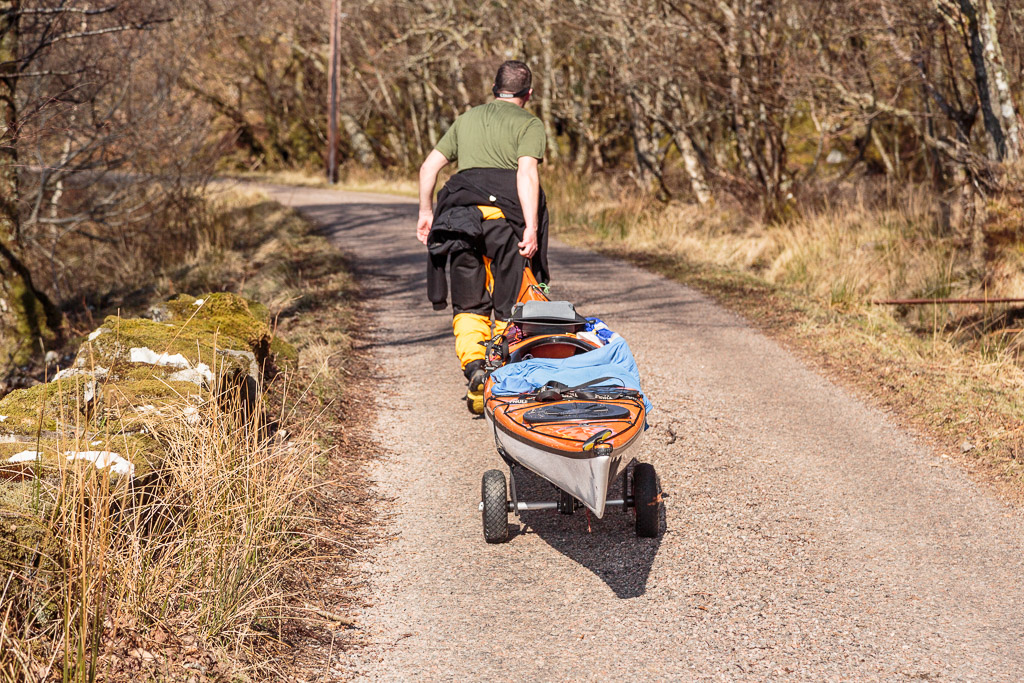 The first proper outing was a 1km portage on tarmac and... 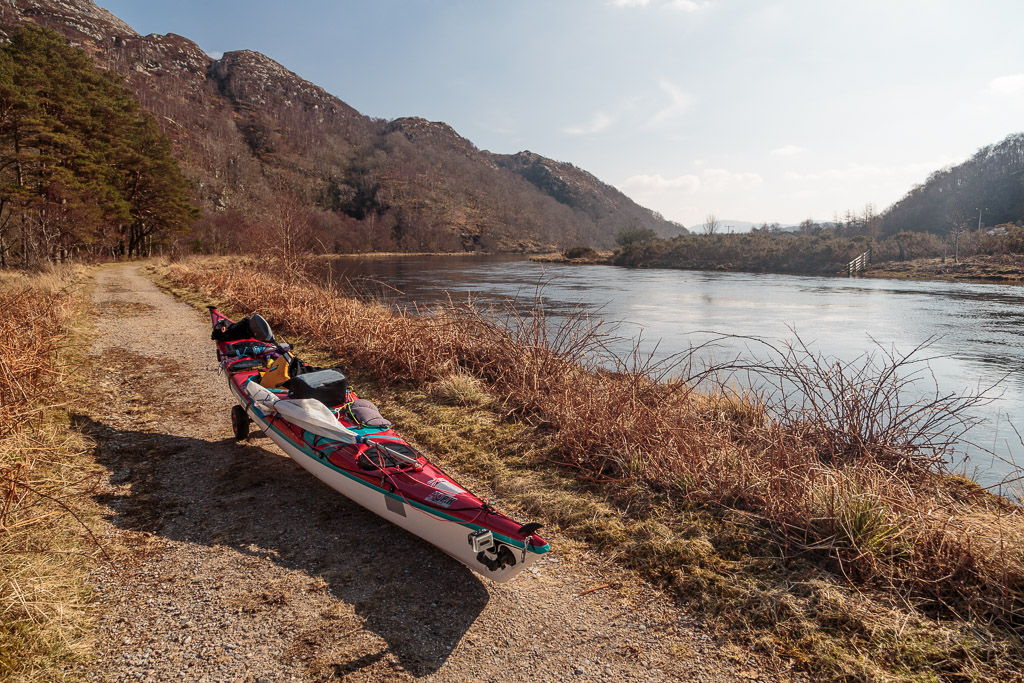 ...smooth surface estate road at Shielfoot. The trolley passed with flying colours. The stand made single handed loading much easier. However,  the real test for any trolley is the Tarbet portage across Jura. I had every confidence in the trolley to tackle the portage after a 15km open crossing arriving just before sunset with a further 3km paddle to the bothy on the other side! It had no problem with the firm sand on the beach at East Tarbert. 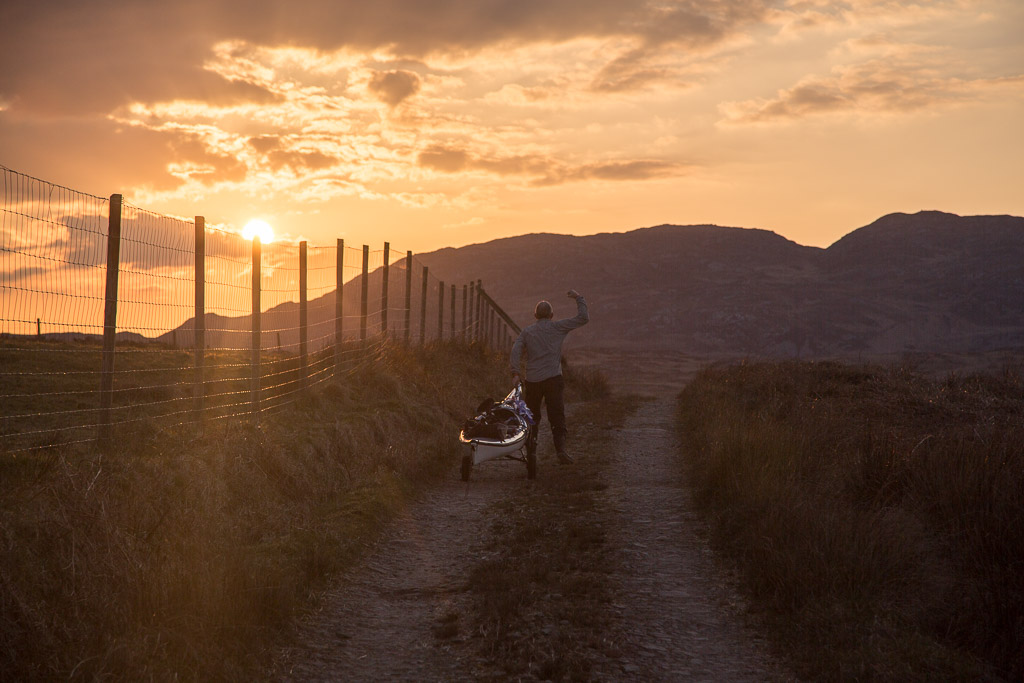 It is a tough crossing, not just for the trolleys. 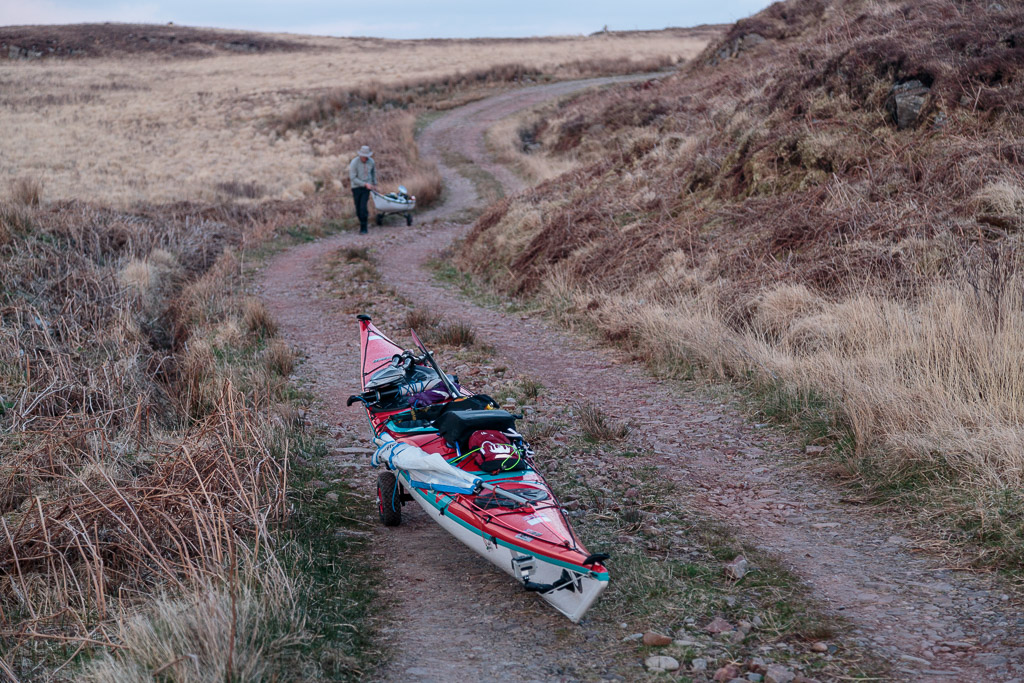 This was one of the smoother sections of road. much of it has been repaired with wheel jarring coarse hardcore. On the previous portage only the KCS dual purpose trolley survived unbroken but it did fall over about three times and it "collapsed" about four times after hitting a stone and the hull support pads slipped and rotated forward allowing the hull to fall down onto the wheels. This time the trolley got us over the portage safely and without incident before night fall. Not only did the trolley survive but it did not fall over and...

...the new rear keel extension stopped the main hull support pads twisting over if the trolley was jarred to a sudden halt by hitting a rock. The pads are very effective at preventing hull scuffs. (The otherwise excellent Kari-tek trolley causes quite a bit of hull abrasion on a rough portage). The 10" wheels on the KCS Expedition allow the loaded trolley to cross terrain that smaller wheeled trolleys could not cope with. The all up weight including the bag was 3.05kg. 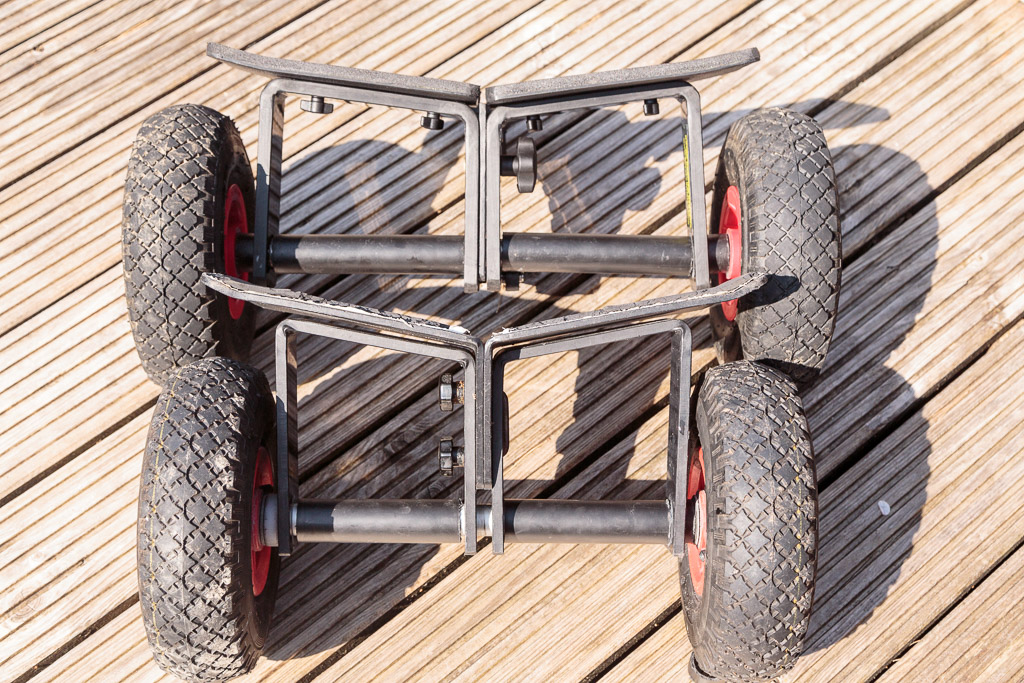 The new expedition trolley (above) is wider and lower than the original dual purpose trolley. The hull supports are now flat instead of being an L shape and that means the trolley packs flatter when dismantled. The black plastic drain pipe over the axles is my own addition. I originally installed it on my two dual purpose trolleys as a spacer to prevent the axle supports "working in" together when under load. The new expedition trolley uprights are thicker and are not prone to doing this but I have found that the drain pipe makes an excellent clean handle. After a long portage the axle is very dirty with a sticky mixture of aluminium and polypropylene dust. Do not think that there is undue wear though. My two 13 year old trolley axles are still fully functional. A friend tried to portage some locks on the Crinan Canal with another "heavy duty" trolley the C-Tug. It had plastic axles and they melted to the wheels on the portage! The trolley support foot worked well on a variety of surfaces including soft sand. One person can now lift the rear of a loaded kayak onto the trolley. The support is on a friction swivel mount and folds vertically when not in use. It also folds back so will not catch if you forget to raise it. The new keel support slots onto the axle and is secured by the single bolt which goes through the centre of the trolley. This is a prototype which has been cut by me several times. The finished article will be neater. 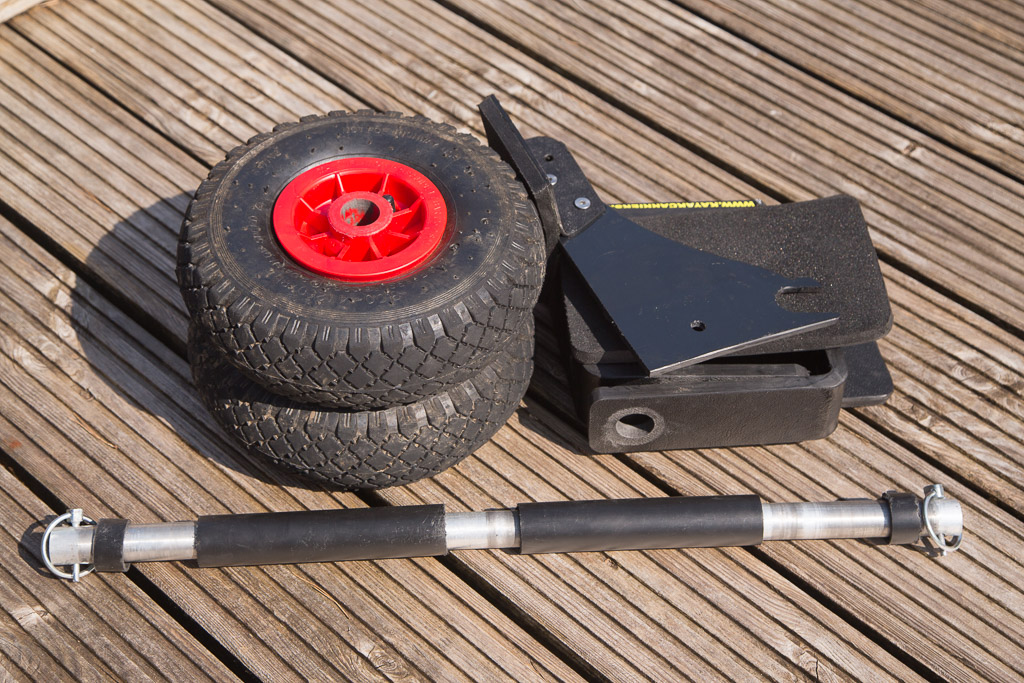 This is the trolley completely dismantled for fitting inside a kayak. This fitted inside my Cetus MV fully loaded for a winter camping expedition. 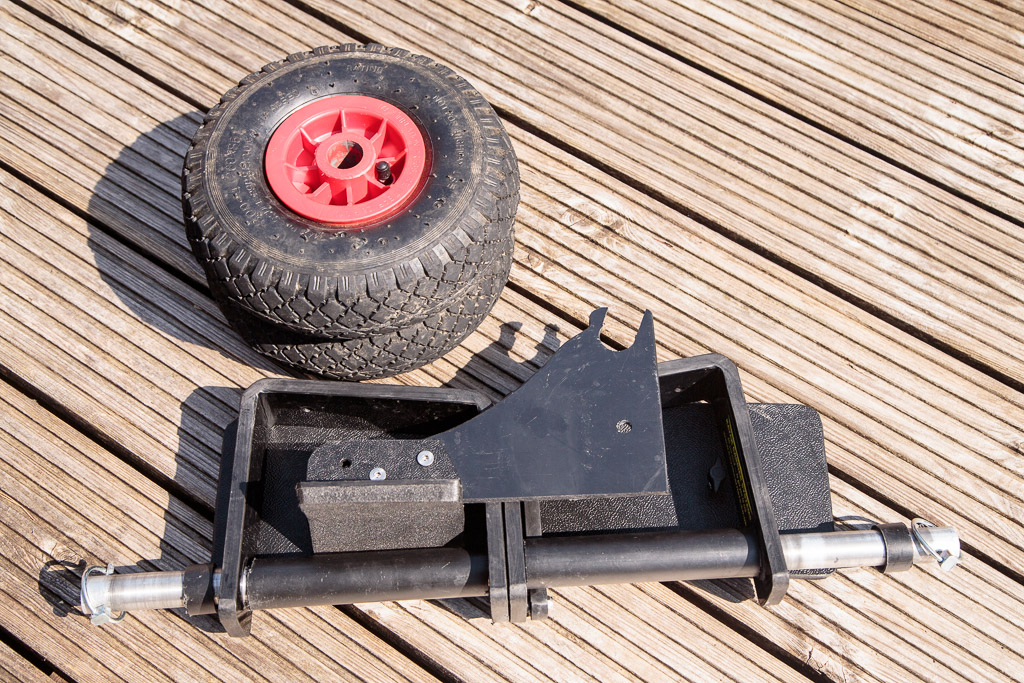 This is the trolley partially dismantled and like this would easily fit inside an oval rear hatch on a day paddle. 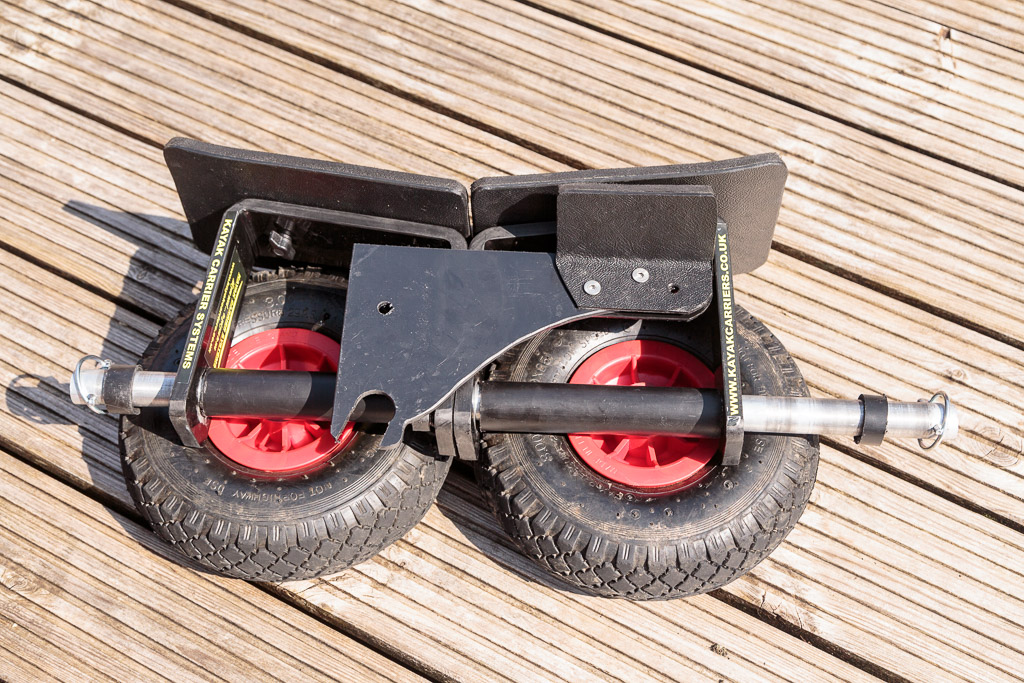 This is the trolley partially dismantled to fit inside the supplied... 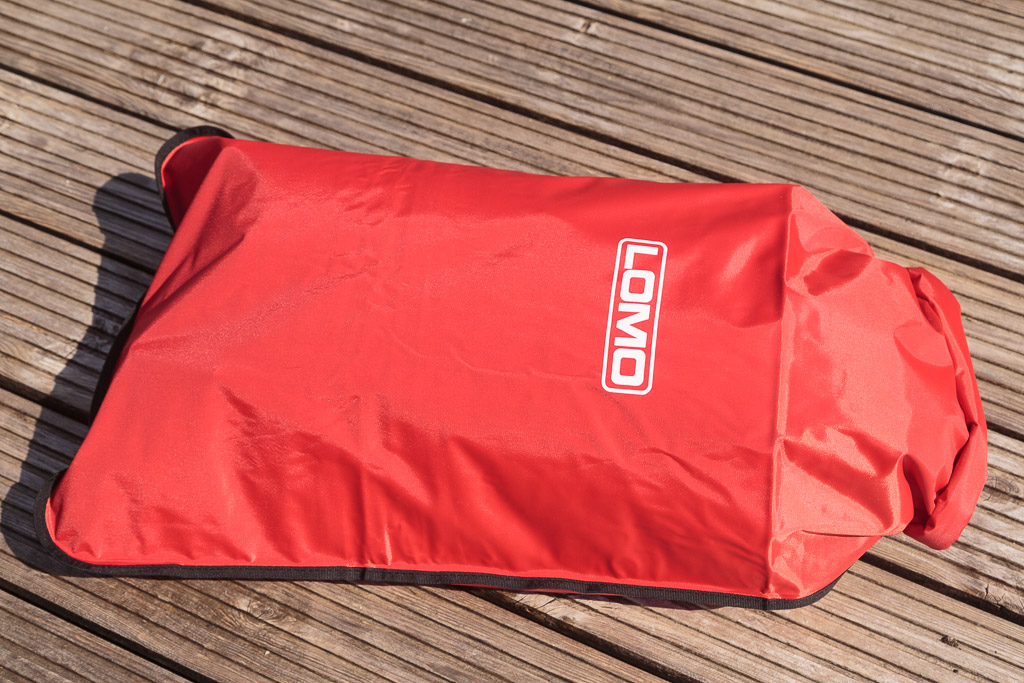 ...Lomo dry bag for mounting on the rear deck if your kayak is full. The bag has no mounting straps but I just use a long piece of shock cord wound over the bag several times with an olive fastener for quick and secure attachment (to the deck lines). The trolley also comes with spare lynch pins for the axle and spare small thumb screws for the hull support plates.

I cannot comment about the longevity of the Expedition trolley at this stage other than to say that because it is made of the same materials as my 13 year old dual purpose trolleys it is likely to be similarly unscathed in 13 years time.

Conclusion
I think the KCS Expedition trolley is now an unparalleled heavy duty trolley for serious expedition use. Despite this it packs small and is quick to assemble/dismantle. The effective stand makes the trolley ideal for solo expeditions. I have found all my criticisms of the original trolley have been addressed and Ronnie Weir is to be commended for such a positive response to consumer feedback. (Many other designers view their creations as perfect and are unwilling to accept even positive criticism.) For me this is now the perfect expedition trolley, I cannot think of any way it could be further improved. Price of production models has yet to be finalised and will appear on the KCS website.

Disclaimer
Ronnie Weir is a friend. I have had free use of the KCS Expedition prototype this spring but I have bought two previous KCS trolleys at full price. In recompense for the loan I have spent time testing and feeding back to Ronnie ideas for improvement and I have also modified the prototype with my own drills and saw! I have no financial interest in KCS.