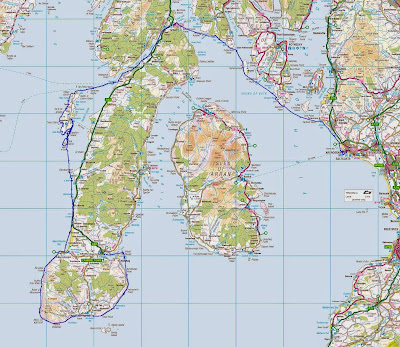 We had now reached the most northerly point in our rather circuitous return trip from Campbeltown to Ardrossan. After portaging the isthmus at the north end of the great peninsula of the Mull of Kintyre, we... 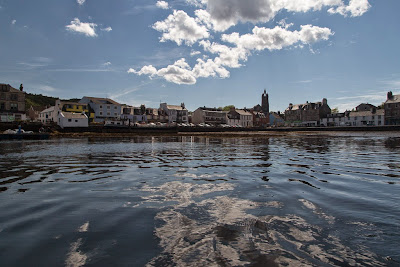 ...found ourselves back in Firth of Clyde waters at Tarbert. After the sweated hard work of the portage it was such a relief to be floating weightlessly on the cool water of East Loch Tarbert. 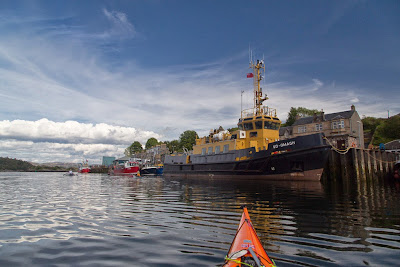 The Tarbert fishing fleet can use either the fish quay in the East Loch or the quay in the West Loch. This can save a long voyage round the Mull of Kintyre or through the Crinan Canal. SD Omagh is an Admiralty Fleet Tender operated by the private firm Serco Denholm on behalf of the Royal Navy Support Services for the naval dockyards on the Clyde.

As we left the inner harbour the beauty of Tarbert's situation was revealed. The distant hills lie on the far side of West Loch Tarbert from which we had portaged. Tarbert Castle stands over the village. It is open to the public and is a wonderful vantage point from which to view the village and its loch. The castle was greatly reinforced by King Robert the Bruce in 1325. 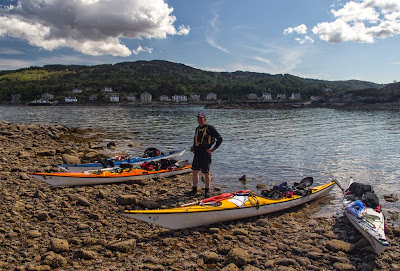 It was too nice to leave Tarbert, so we landed for an extended luncheon in the delightful Port Ban bay. 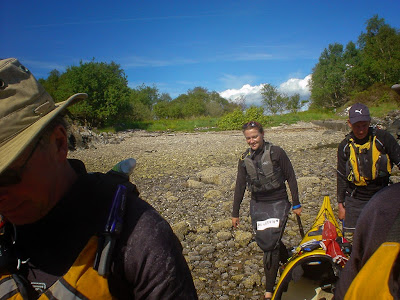 By the time we had finished lunch it was low water and we faced our second portage of the day back to the water. Our Karitek portage straps proved very useful.

Posted by Douglas Wilcox at 10:09 pm No comments: