Rockpool Menai 18 in the Sound of Islay 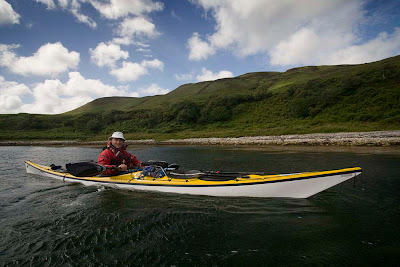 On our Islay trip, I left my Quest at home and once more borrowed the Rockpool Menai 18 expedition kayak from the good folk, Geoff and Anne at Kari-Tek. I had previously borrowed it in autumn 2007 and used it for day trips on the Solway. I really wanted to use it as intended when loaded with camping gear and Guinn...I mean supplies! This boat is beautifully made and did I mention huge? Despite its size it is not too heavy and I have never had such an easy time with packing! It's also incredibly comfortable with the usual Rockpool ergonomics in seat, thigh braces and foot rest. The little fore deck hatch is so useful for items you want to get to quickly. It is a fast boat. If Tony and I are both in Quests, I can't keep up in a sprint. In this boat on a long sprint, to see who would get the best seat in the bothy, I was able to just keep in front of Tony's Quest. (It's a pity he can leap out of a kayak so quickly, as he still got through the bothy door first!) 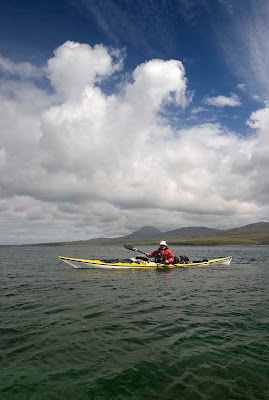 We had a lot of wind on our visit to Islay and the Menai 18 was very easy to trim to any course with Jeff's really excellent Hydro skeg rudder system. When it was really blowing, it was best to use this in skeg mode rather than rudder mode. It has a low deck profile for such a large boat. This reduces windage but the low back deck makes it a very easy boat to roll for those that favour lay back rolls. 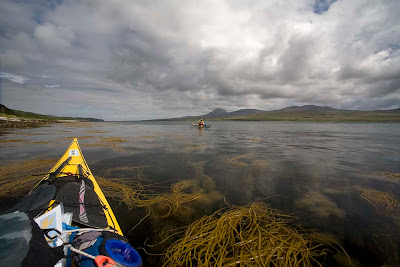 For big crossings and expeditions I think the Menai 18 is outstanding. Its only drawbacks (when compared to smaller day boats such as its sibling the Alaw) are a comparative lack of manouverability and a tendency for the long flat bottom section to slam on short steep waves. However, my friend Alan tried it as a dayboat on the Solway. Alan is 6'5" and a very muscular 19 stone. He raved about its comfort, fit and manouverability and has now bought one second hand. Its lighweight former owner has now bought an Alaw Bach.

Unless you have a similar build to Alan, I would not recommend it to use as a single kayak, if most of your trips were day trips with just the occasional weekend or week long expedition. However, as a dedicated expedition kayak the Menai 18 has it all: practicality, carrying capacity, speed, handling in strong winds and most of all comfort, day after day.

And where better to test a kayak than on Islay's varied coastline with views to Jura?