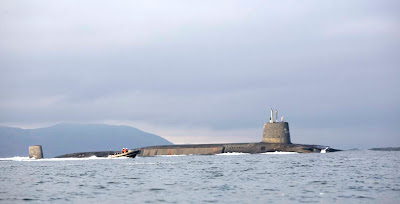 Yesterday on a cold January day Billy, Tony and I went for a little 30km paddle over to the island of Bute. You would think we would have had the place pretty much to ourselves but this Royal Navy Vanguard class nuclear (powered and armed) submarine was making its way home to Faslane on the upper Clyde. By the look of her paintwork, she had been on a long World cruise and I am sure that the families of her crew will be overjoyed by her return. 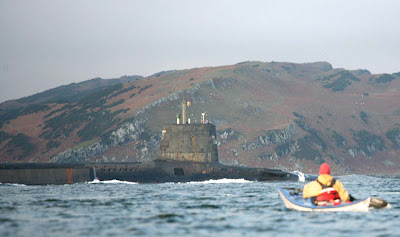 Having not crossed the bows one of these particular vessels before, we were unsure of protocol. Should we stop and let her past? Should we dip our Red Ensigns? Should we welcome her home by the firing of flares? Should we call out greetings on Channel 16 followed by a chorus of "Rule Britannia"? Should we ask "What ship are you?" (She could be the Vanguard, Vigilant, Victorious or Vengeance but boats like these do not have name plates.) Should we attempt to surf her bow wave? 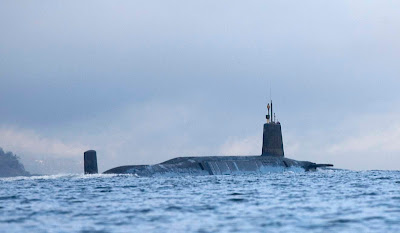 Having left our maritime protocol books ashore, we decided to stop and let her past.