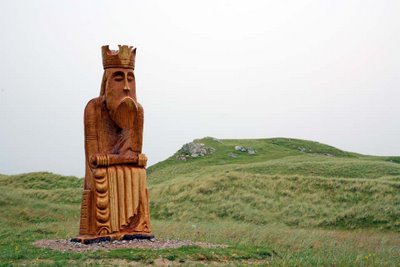 Still on the the subject of the Vikings, they did not just pillage, rape and leave their chromosomes in the Celtic population. They also left their chess men. This is a giant wooden effigy of the King from one of the famous Lewis chess sets. 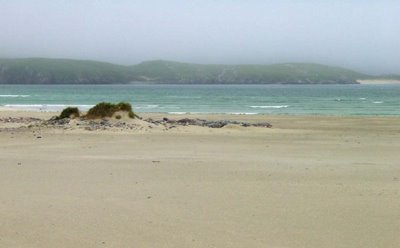 These Lewis chess sets were found in the early 19th century under the machair (sandy grassland) which lies at the back of the great Bay of Uig on the West coast of Lewis. They were concealed in a stone chamber that was buried under the sands. There are 93 pieces from four or five sets. Eleven pieces are in the Royal Museum of Scotland in Edinburgh and the rest are in the British Museum in London.

I think the most interesting pieces were the berserkers which represented the rooks. These figures are biting the tops of their shields and have wild staring eyes. These were Viking warriors who were naked or dressed in bear or wolf skins and fought in an uncontrolled rage or furious trance. This is the origin of the word berserk, as in "the sea kayakers went berserk when 15 jet skiers arrived at the previously tranquil beach".

So it's not just chromosomes and chess men that the Vikings have left us, it's words too.
Posted by Douglas Wilcox at 4:41 pm 1 comment: