Assisted re-entry after a capsize with a Flat Earth kayak sail.

At the recent Flat Water Sea Kayak Symposium many of the people who did not try paddle sailing said they were put off because they feared the consequences of an accidental capsize and not being able to recover easily. Capsizes do not happen very frequently when paddle sailing and the paddle sailing groups had fewer capsizes than some of the other groups in the gusty F5 winds of the day.

I have practiced rolling with a sail (even managed some successfully!), solo re-entry and assisted re-entry and it really is not a big deal. However, practice scenarios are never that realistic so I recently took the opportunity to go for a short swim on the way back from a trip to... 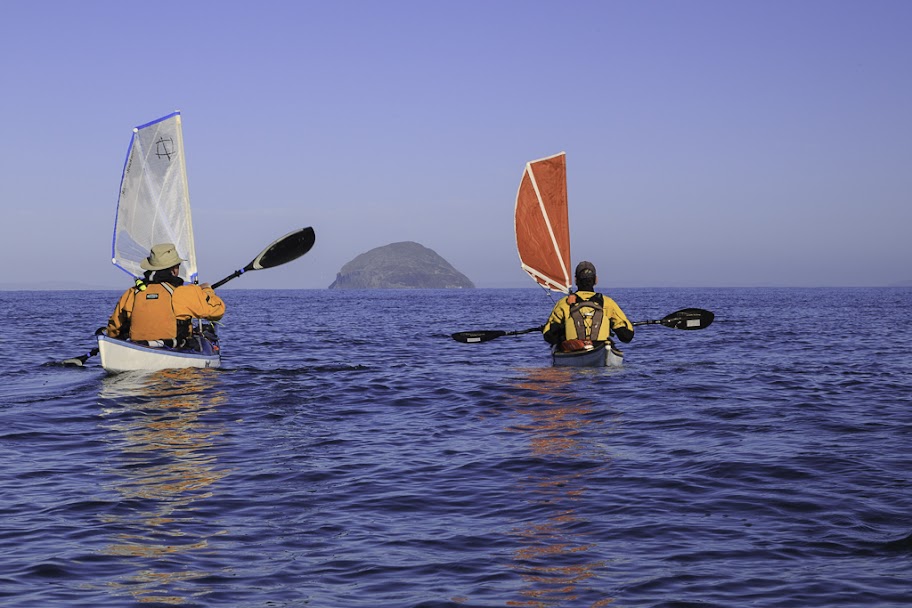 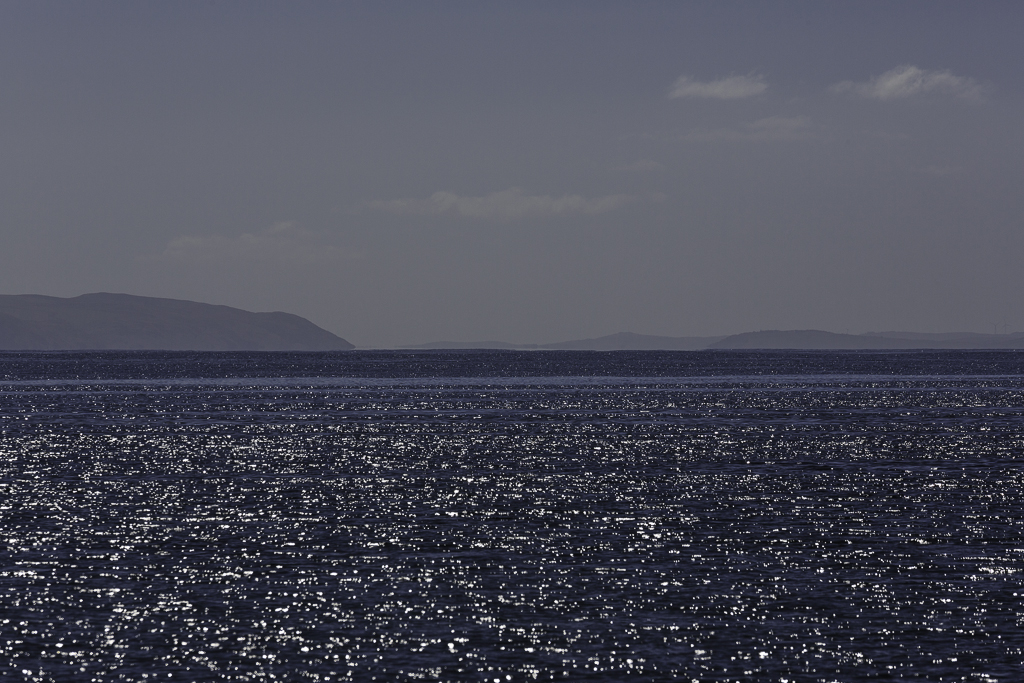 A lovely little wind got up for a close reach back to the mainland, some 14km distant. 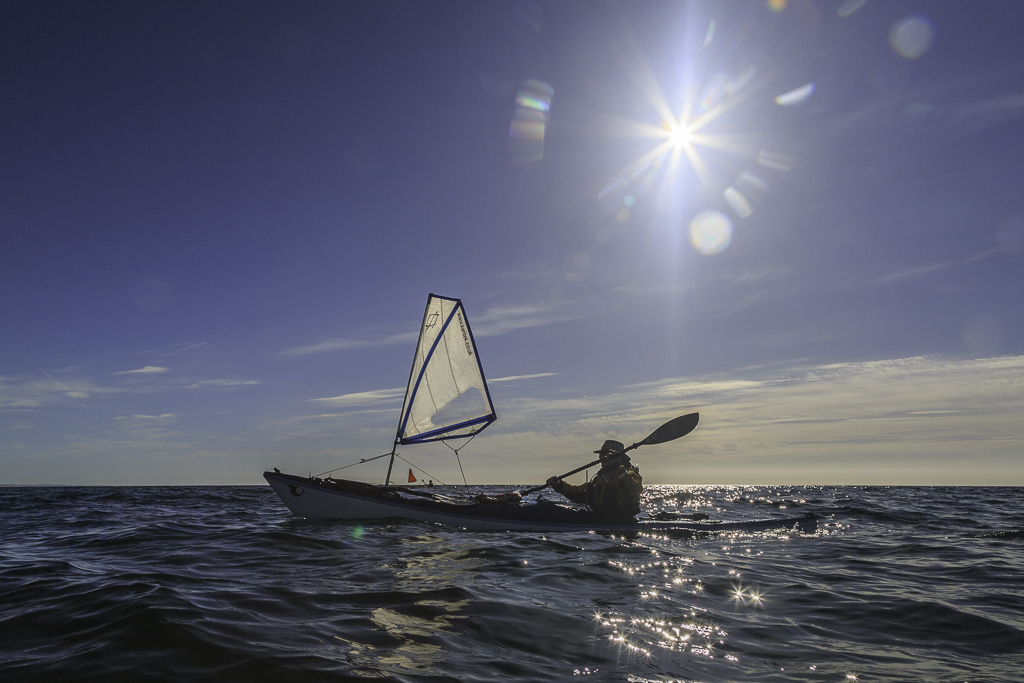 Including circumnavigating the island, we covered a total of 33km, so we covered 19km on the way back without a break. 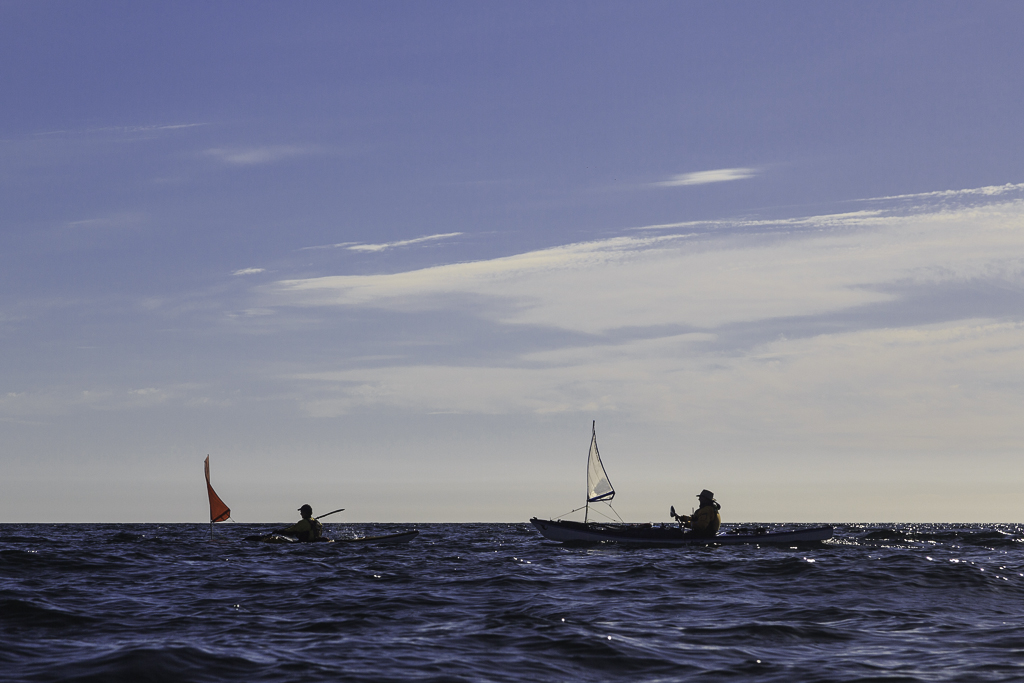 We made the crossing in line abreast so we could keep our eyes on each other, without turning round. 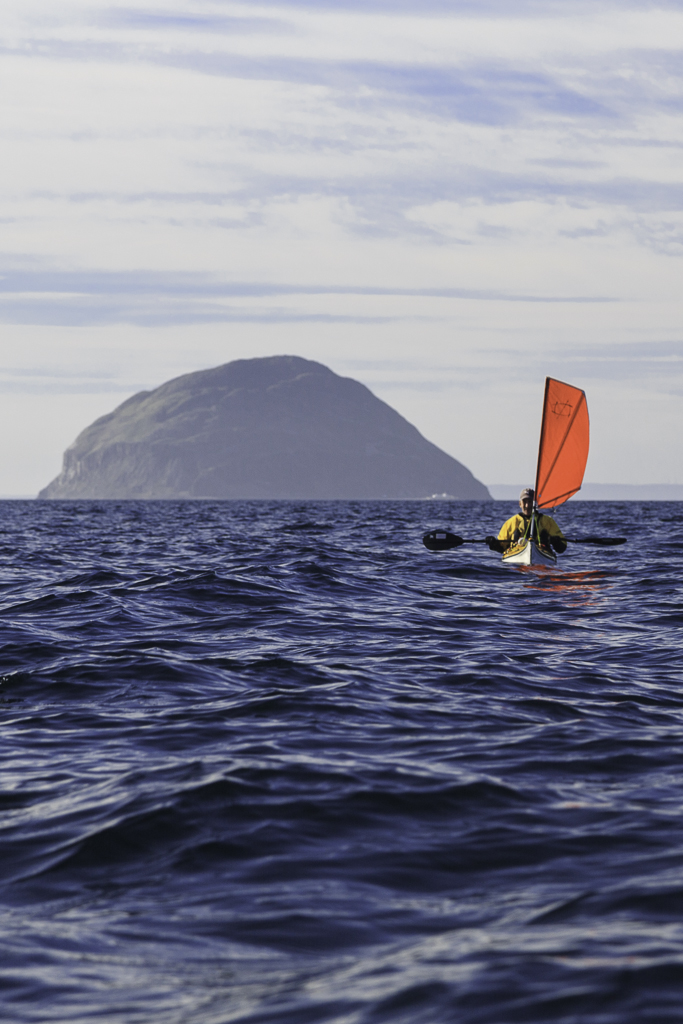 This was the longest I had paddled since major knee surgery and my knee was absolutely killing me. 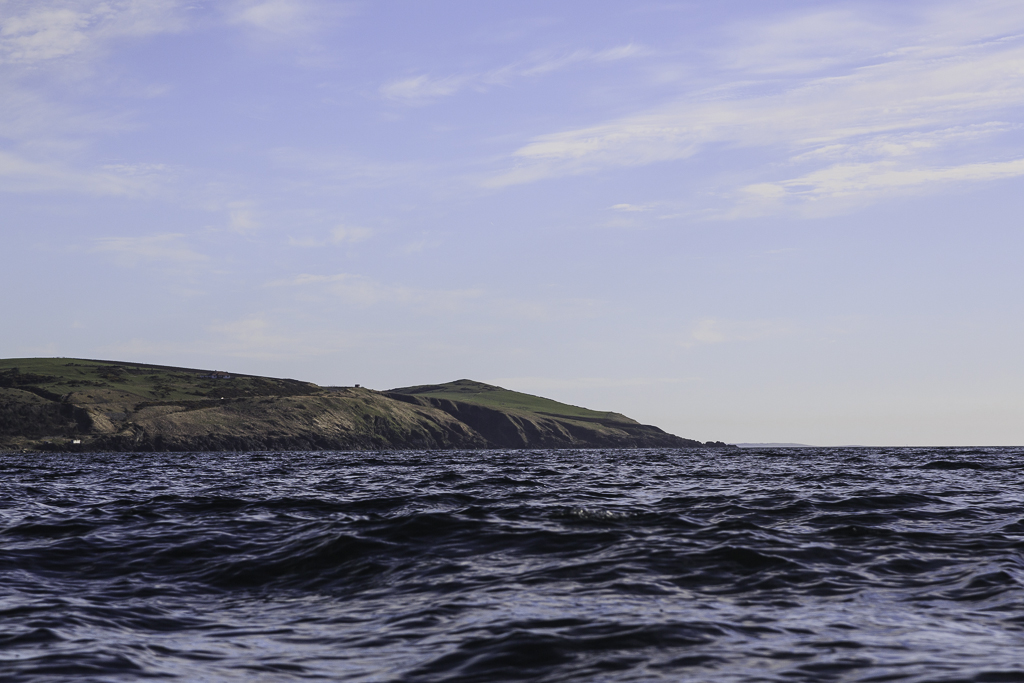 As we approached Bennane Head, about 1km off the mainland shore, the tide rate increased a little but the conditions were very benign. Certainly calm enough to get my Canon 5D mk3 out for this photo. After I put my camera away the pain in my knee was so bad I had to do something about it. I left the sail sheeted in to keep me moving, put the paddle down and put both hands behind the cockpit. I lifted my backside off the seat to stretch my sore leg. Unfortunately a little wavelet chose that moment (when I had a high centre of gravity) to come along and sploosh, I was in. I capsize frequently when surfing but this was the first time I had fallen in on a trip since 2005.

I was looking through the crystal clear green water before I could even think of where the paddle might be (at the end of a leash actually). So I bailed out. The water temperature was only 7.5C but I was wearing a drysuit with thermal protection under it. Nonetheless, it was not the ideal location to go swimming at Easter and so I started the recovery process with the kayak upside down, I let off the sail uphaul and tilted the mast back. This released the tension in the sheet (which I did not bother to uncleat). If you try to gather the boom directly to the mast, the sail fills with water like a great sea anchor. Instead I grabbed the top of the mast and started gathering the top of the leach towards it. Once I had the batten top and the mast tip in my hand I continued to gather the leach down to the boom. I then rolled the sail up and retained it with its elastic securing strap on deck.

I then rolled the kayak onto its side to prepare for a re-entry roll but I noticed the Mike (who had been paddle sailing in close formation) had dropped his sail and was preparing for an assisted re-entry. I righted the kayak then went to the stern and acted as a sea anchor so that my kayak blew away from me. 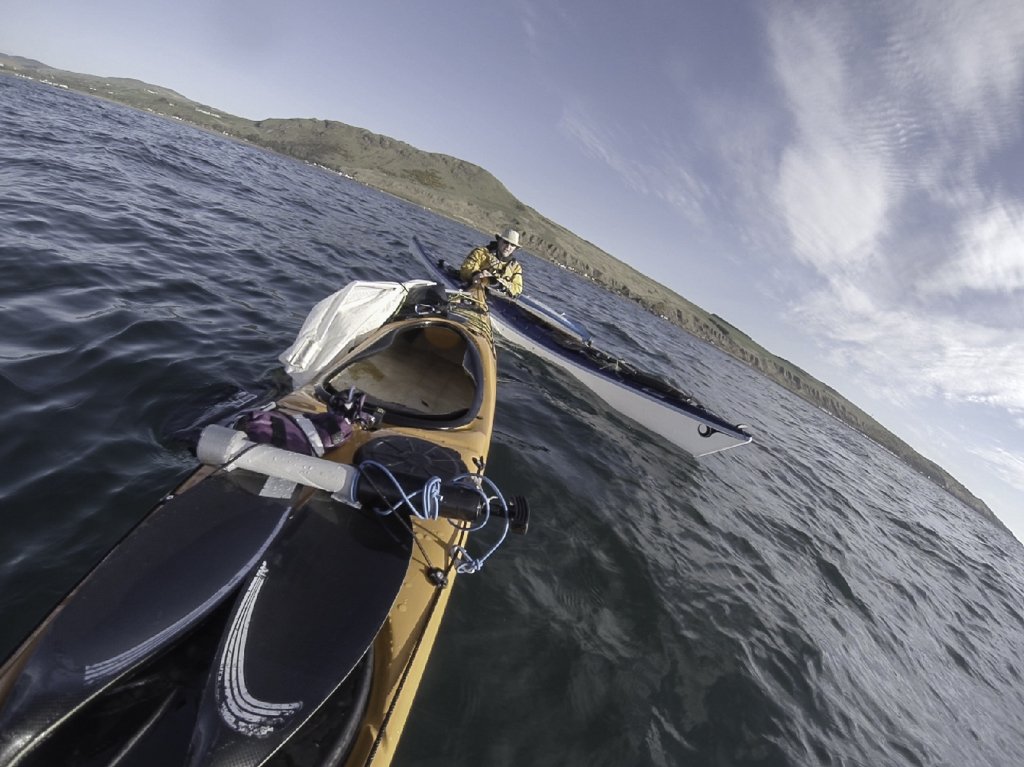 This meant that Mike could easily approach my bow from downwind (I would not try this in surf). 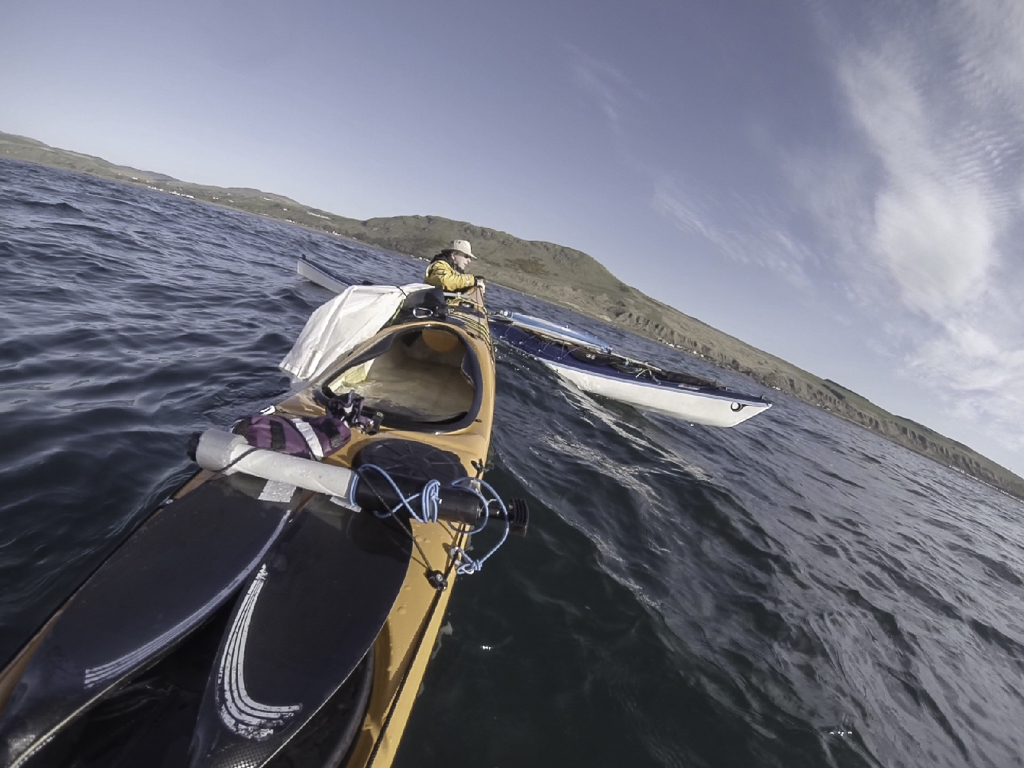 Once contact was made, I swam and Mike twisted the kayaks into a T then I sank the stern to help Mike lift the bow and we both... 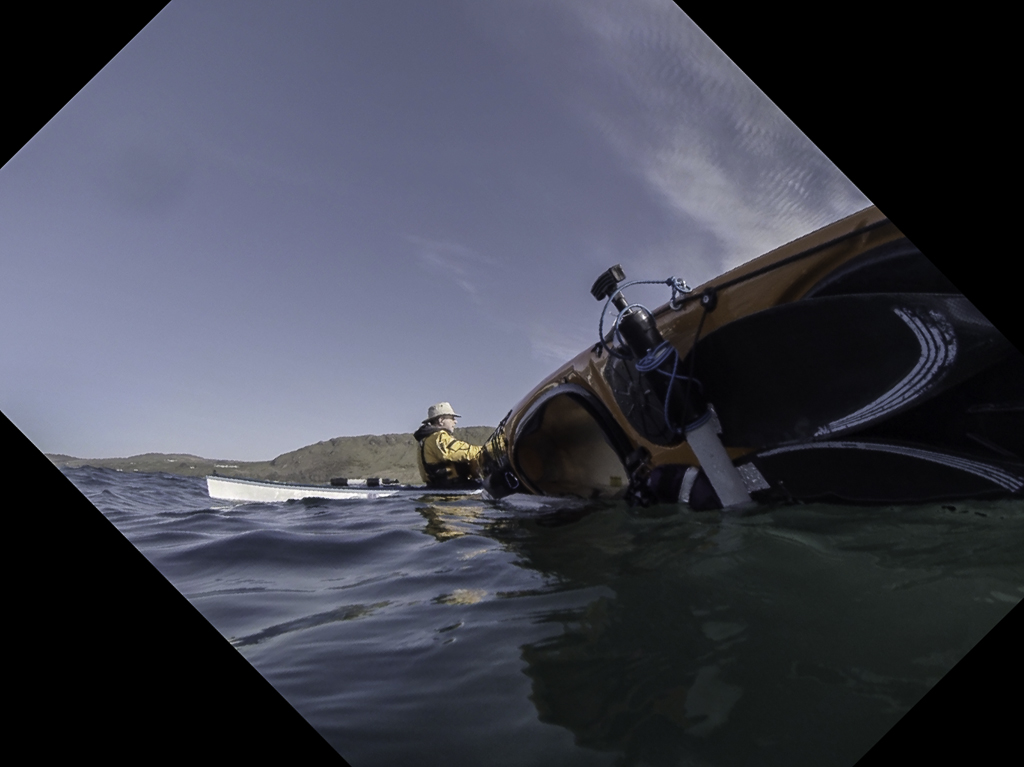 ...twisted the kayak upside down to drain the cockpit. I have short legs and a custom bulkhead so there was not a lot of water inside anyway. If it had been rough I might not even have bothered emptying the kayak. 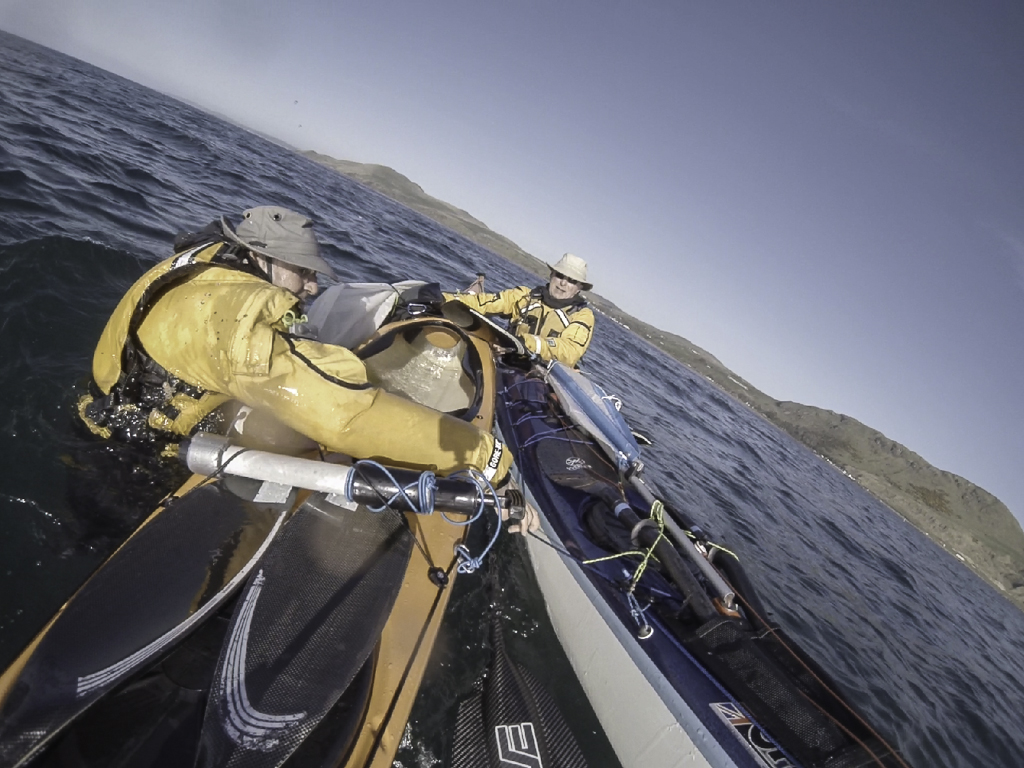 We now swam and twisted the kayaks parallel and bow to stern. I moved up to the cockpit and reached over with my stern hand and grabbed the nearest of Mike's cockpit lines. 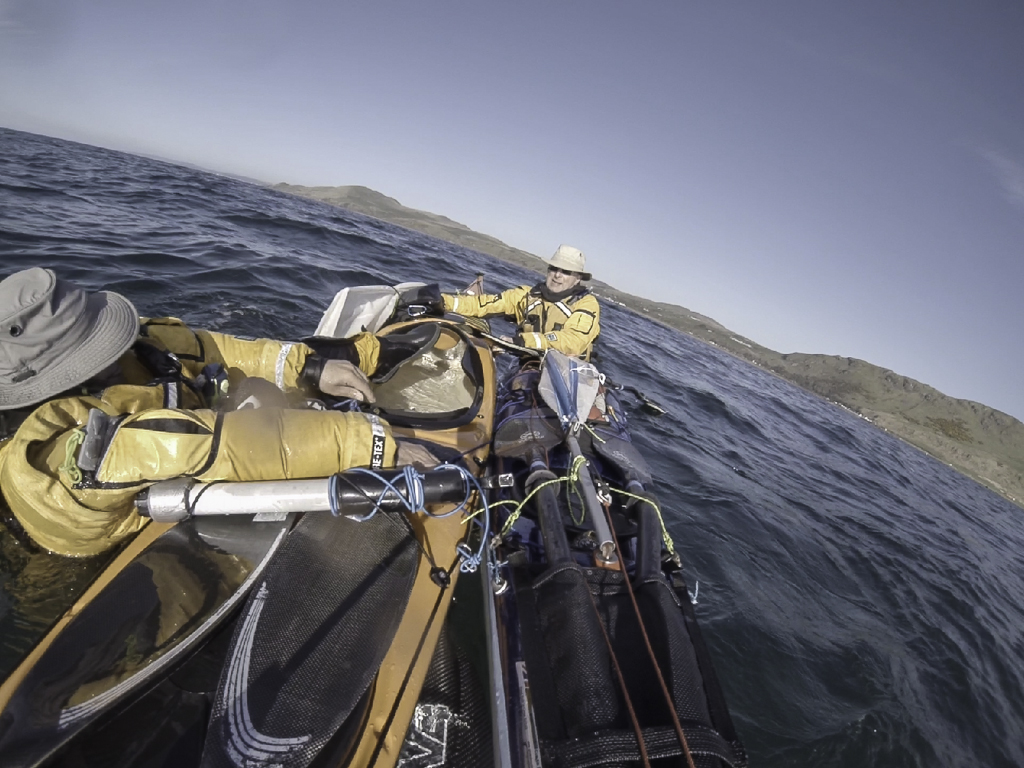 I then swung my forward leg up inside the front of the cockpit and hooked my heel inside. I straightened my leg while pulling on Mike's deck line. 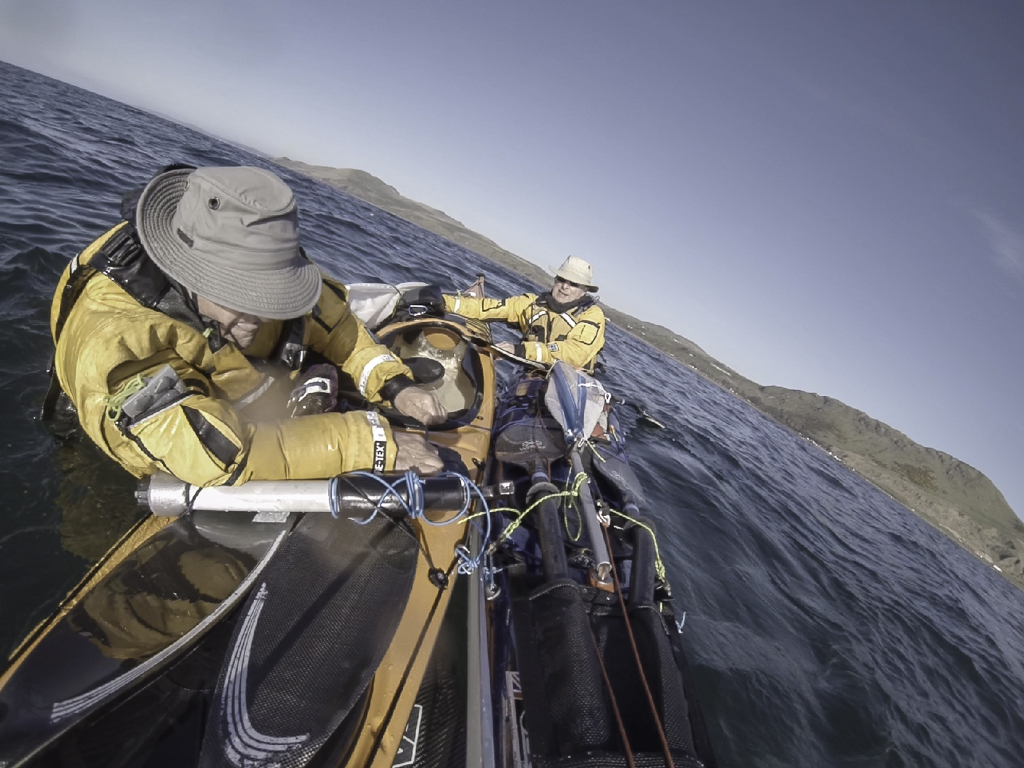 This brought me out of the water and allowed me to grab Mike's deckline with the other hand.
. 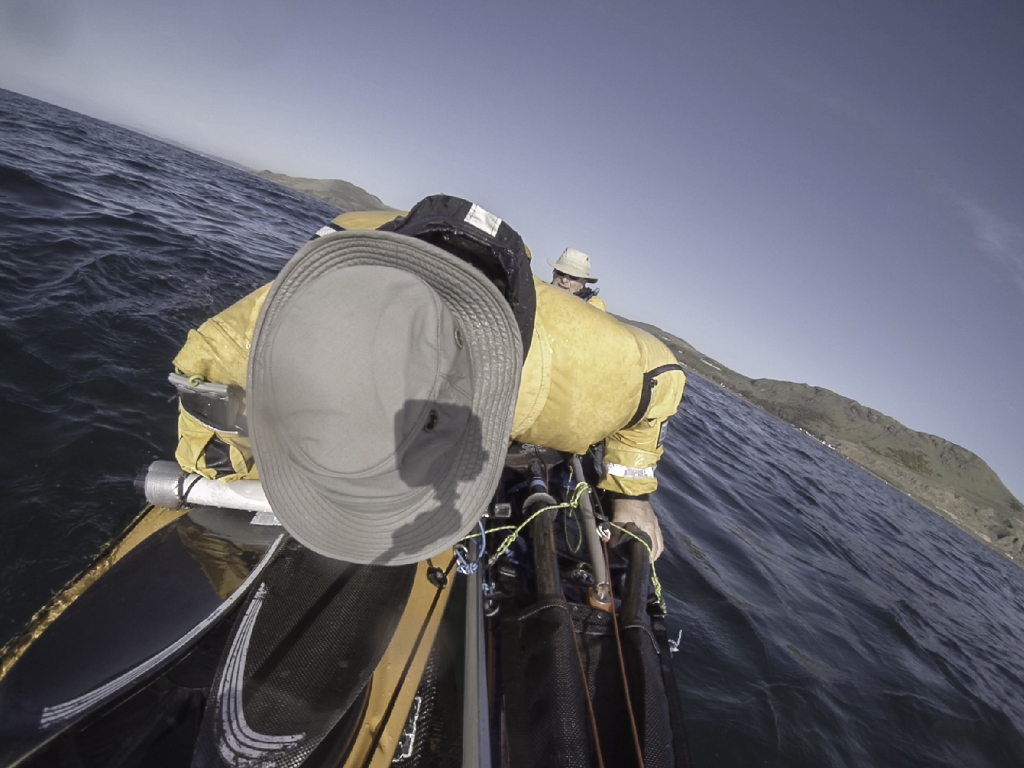 I continued to roll over onto my front, lying on my back deck and keeping as low as possible while I got my other leg in. 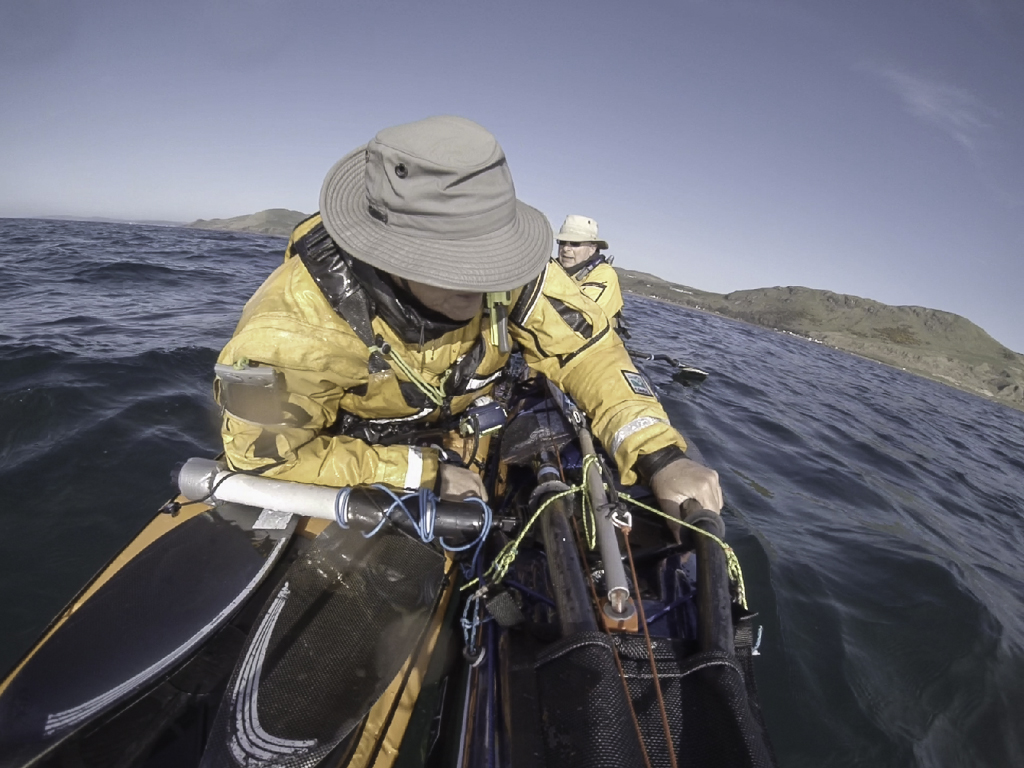 Now I rolled back the other way, sliding into the cockpit as I did so and... 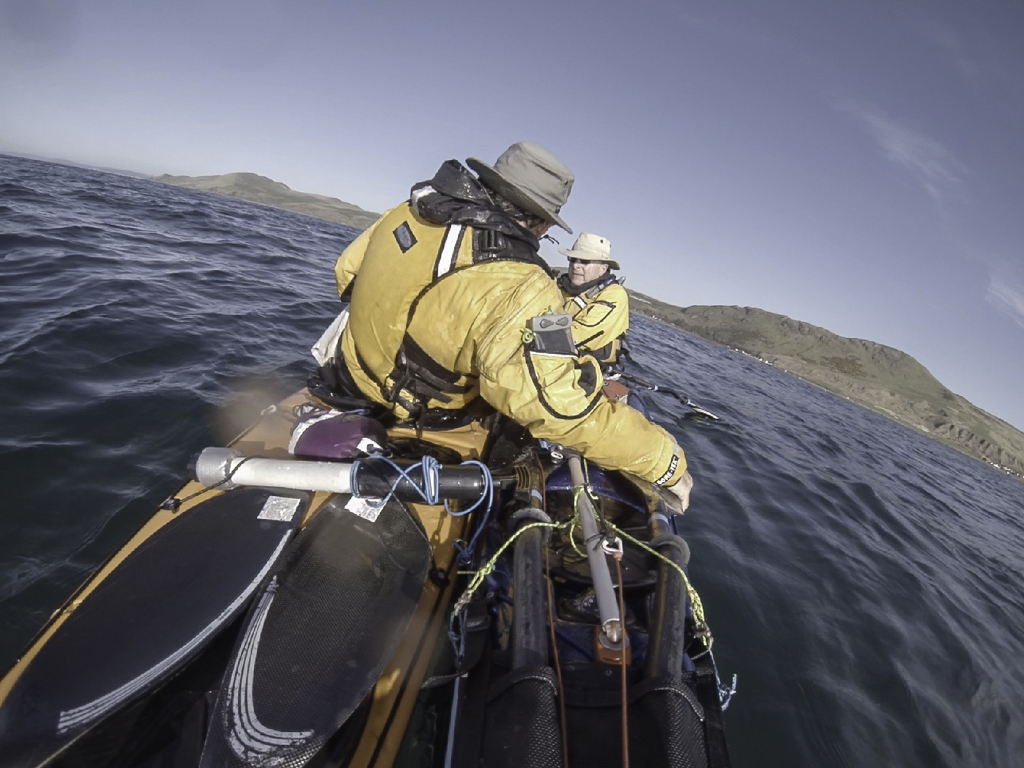 ...got my backside into the seat as soon as possible before... 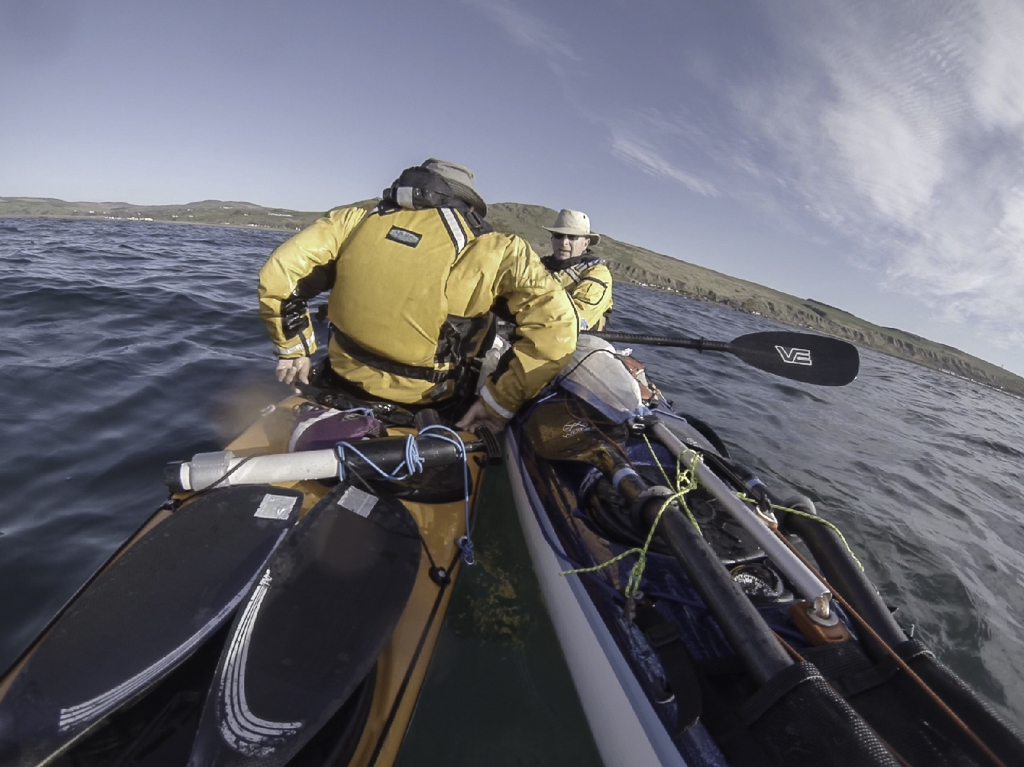 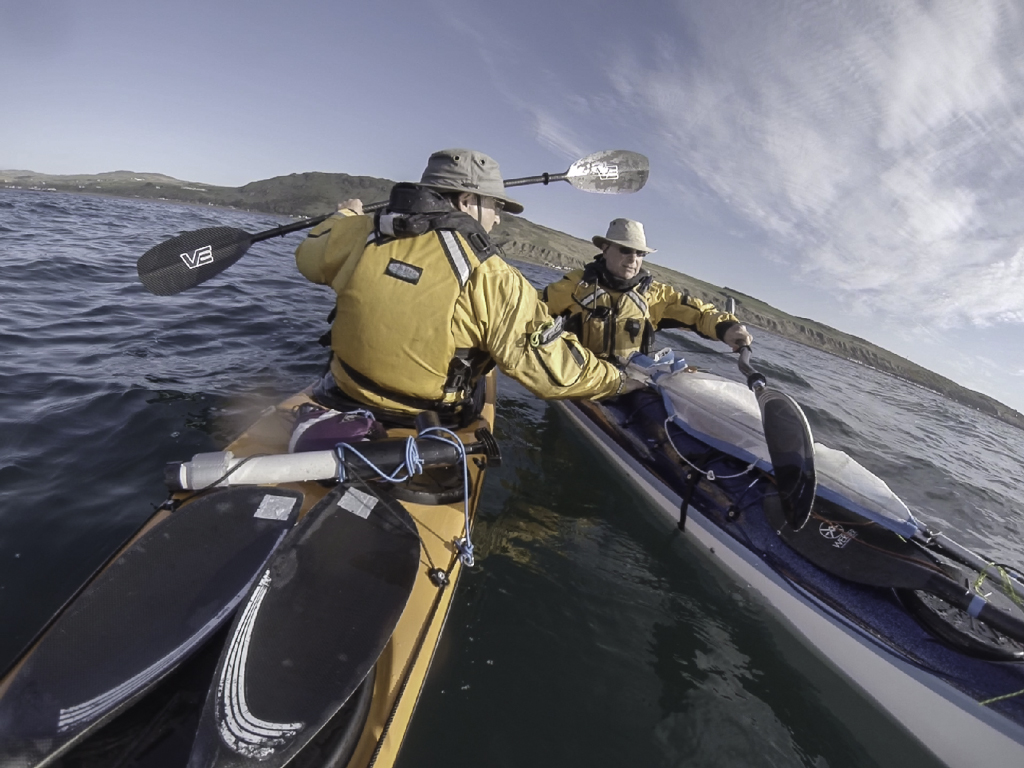 ...grabbing the paddle and giving Mike a good push off. 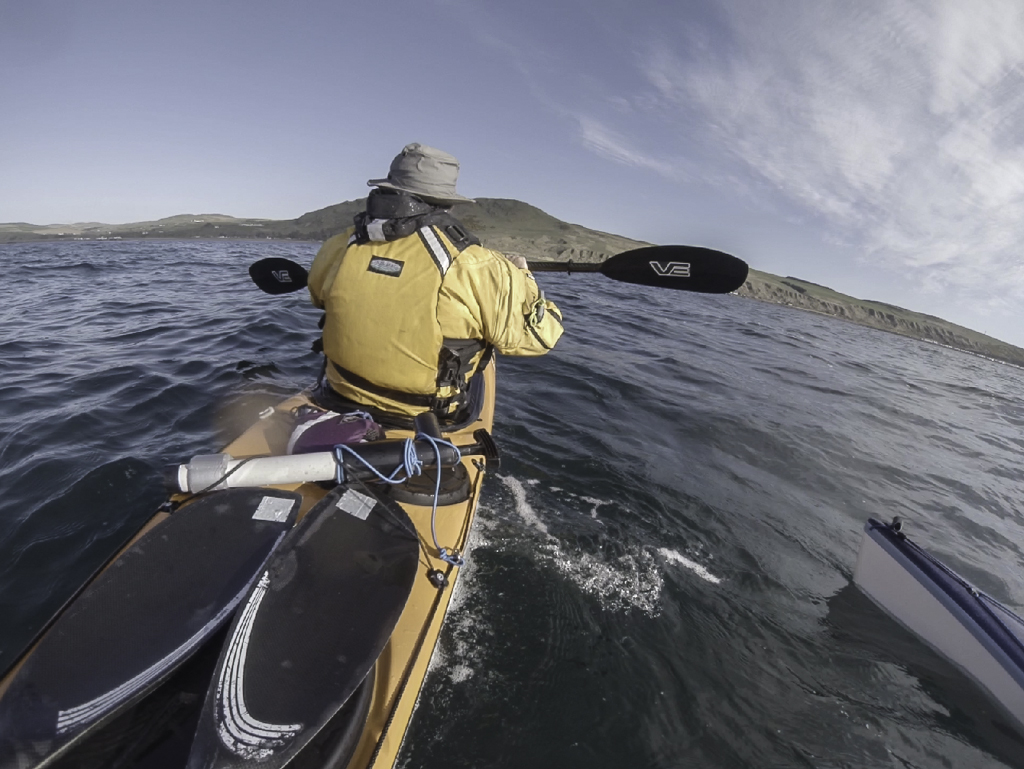 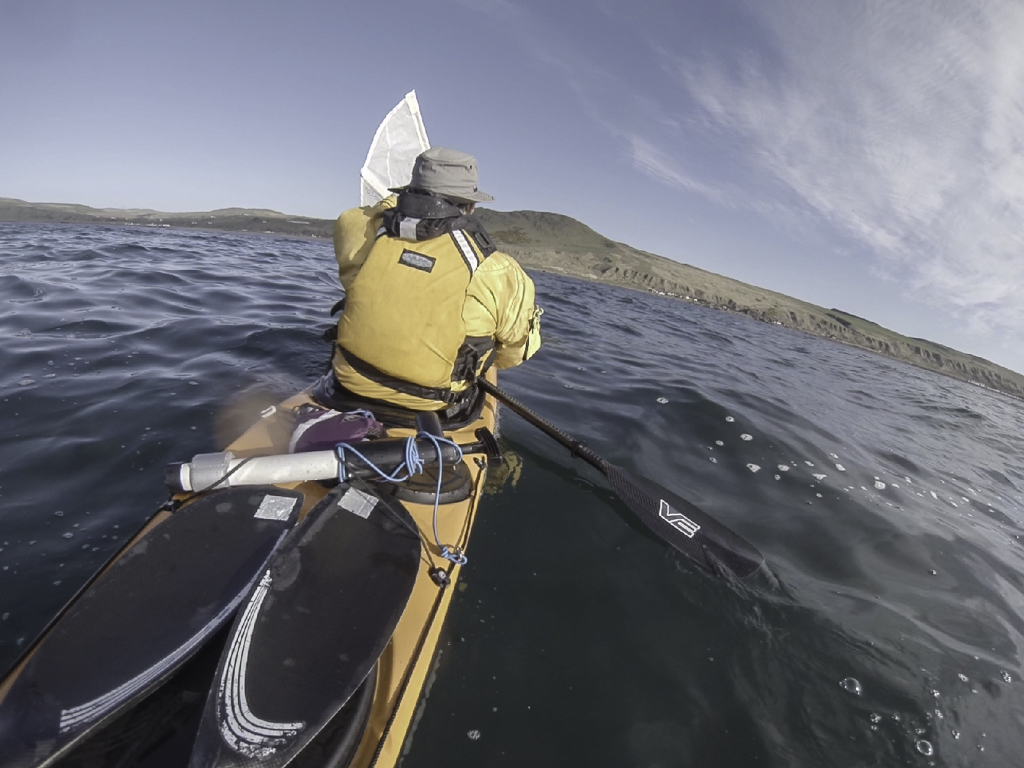 Then I hoisted the sail and... 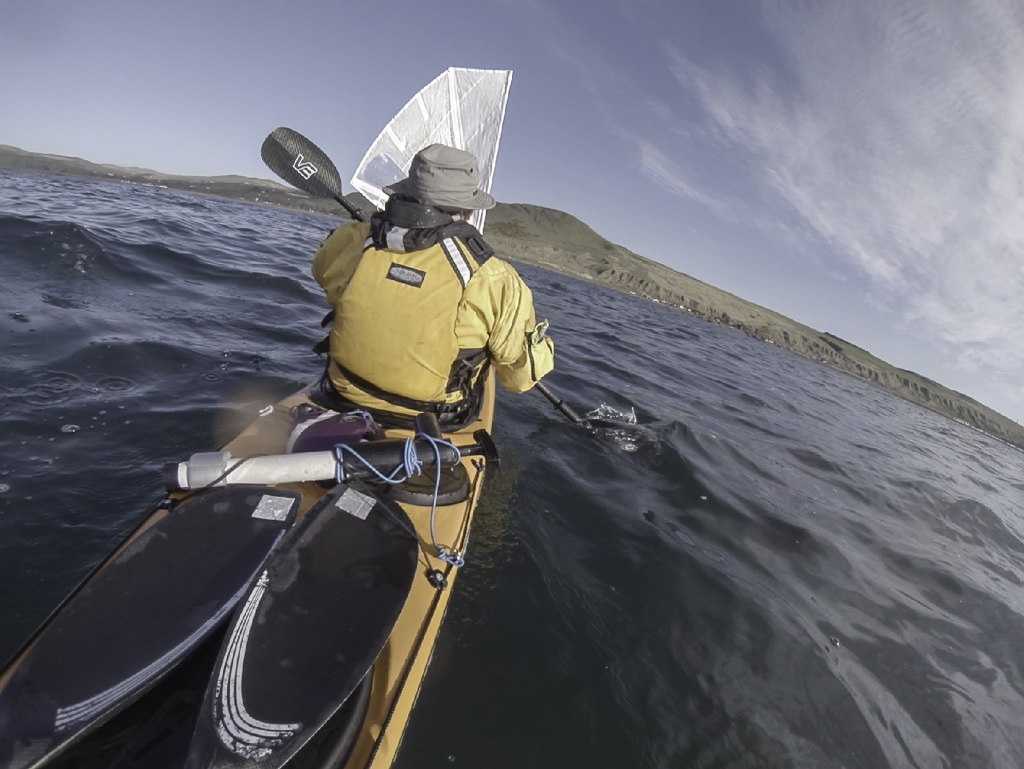 ...paddle sailed the final kilometre back to... 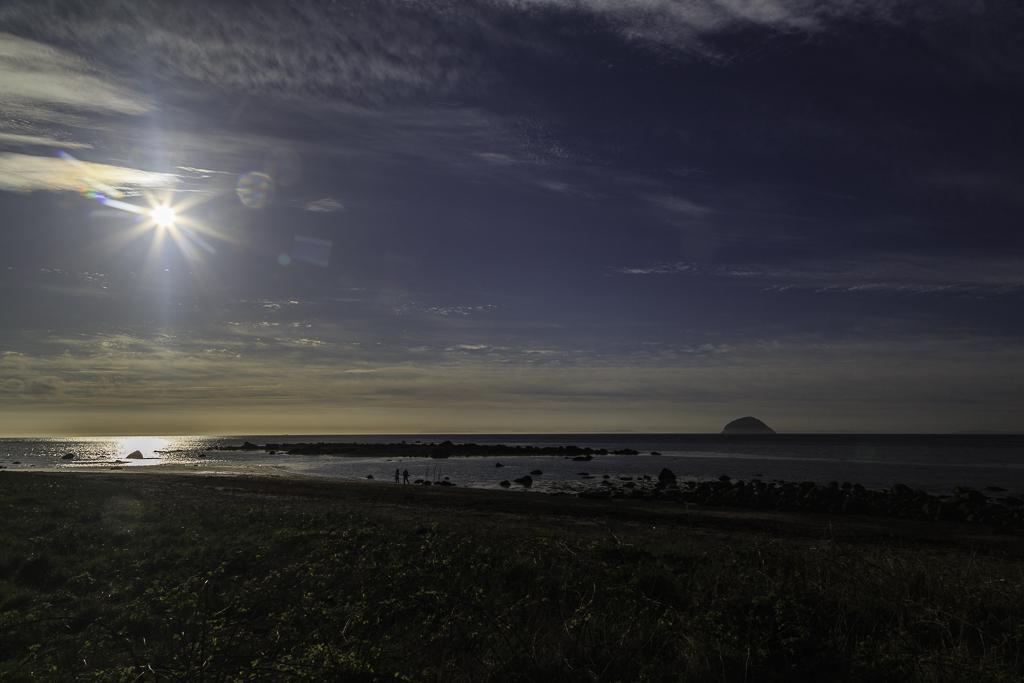 ...shore as if nothing had happened. 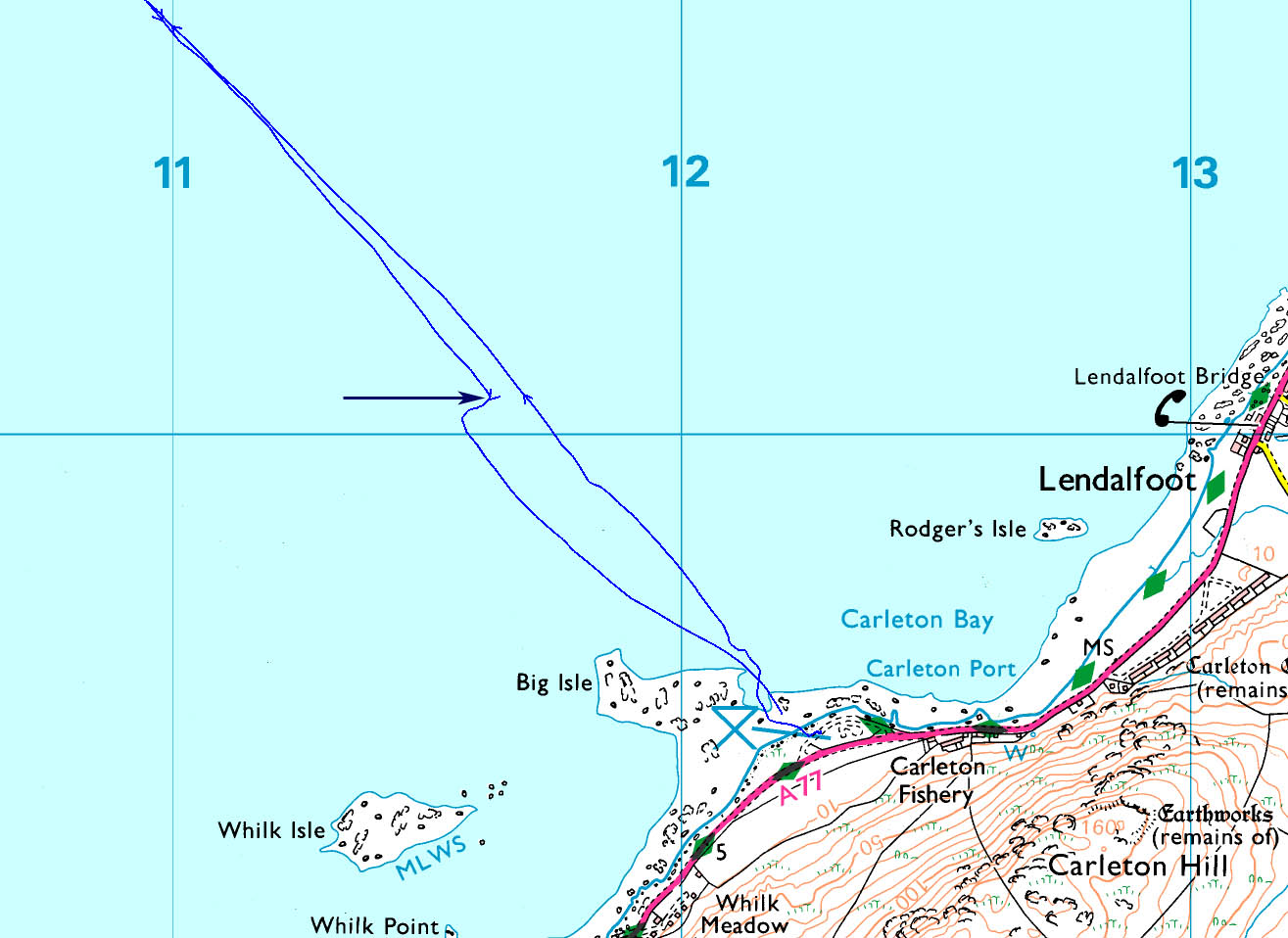 From falling in to getting the sail back up again was 3.5 minutes but most of that time I was in the kayak. The arrow points to the capsize. The SW going tide took us SW against the opposing SW wind.

So a capsize when paddle sailing is nothing to be bothered about. There are a number of lessons: 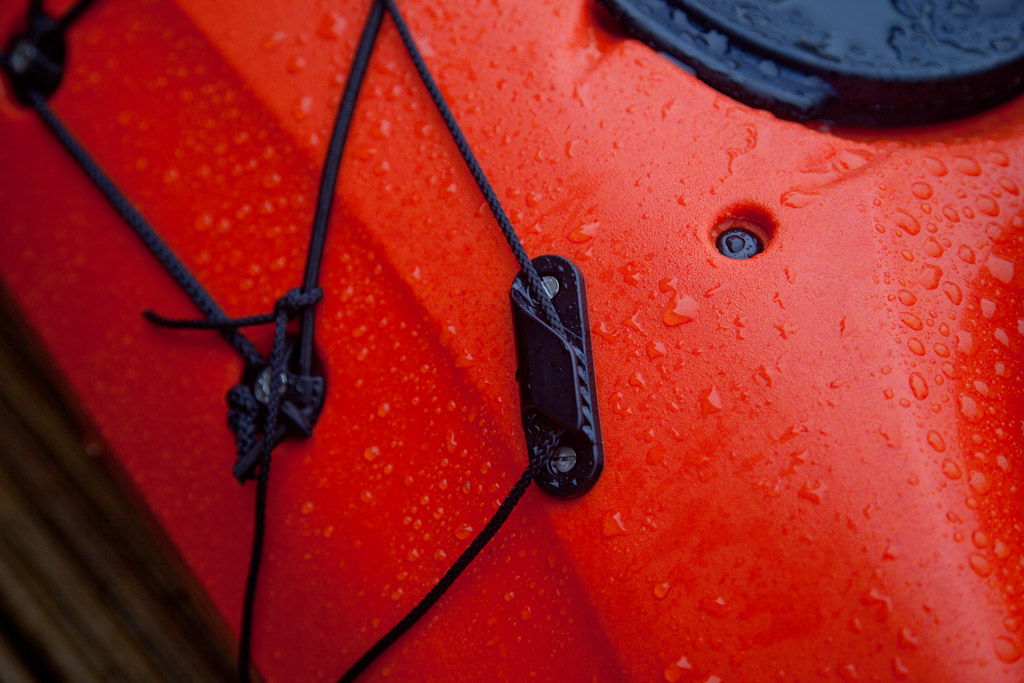 One tug and the line is released. If you have a cleat with a fairlead, you might find it recleats as the line runs out through the fairlead.