A stinking end to a stunning trip on the north west coast of Jura. 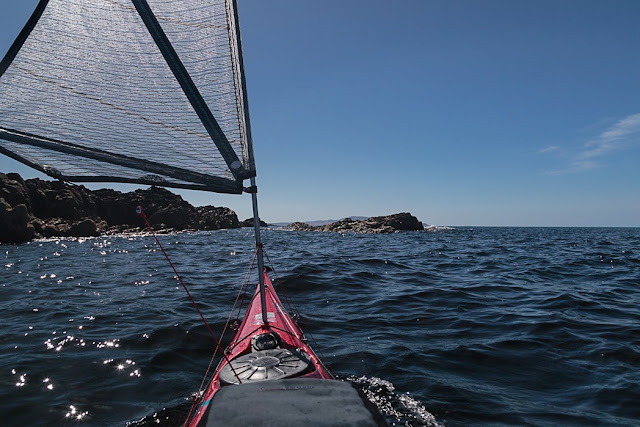 From Shian Bay to Ruantallain on the west coast of Jura the coastline consists of an... 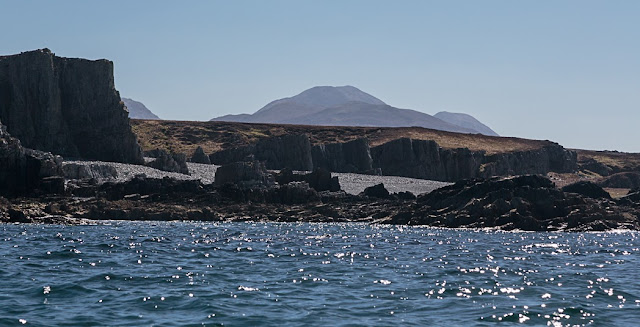 ...unbroken wall of raised beaches and dry cliffs caves and arches. At sea level there are sharp reefs in an almost unbroken band for six kilometres. 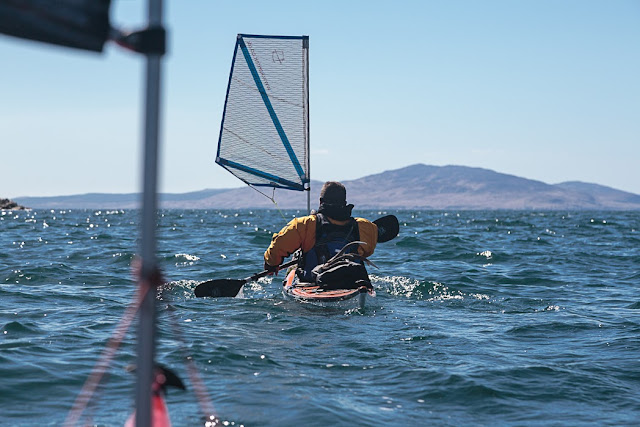 Rounding one headland we caught sight of Islay and the northern entrance of the Sound of Islay. The north going spring tide was running until early evening so we planned to wait for the south going tide somewhere on the Jura coastline to the SW of the entrance to West Loch Tarbert. 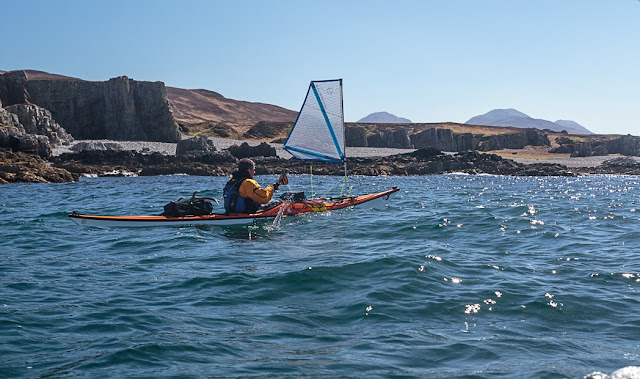 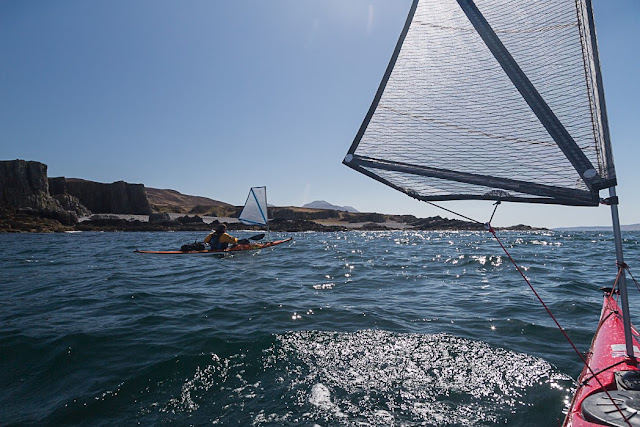 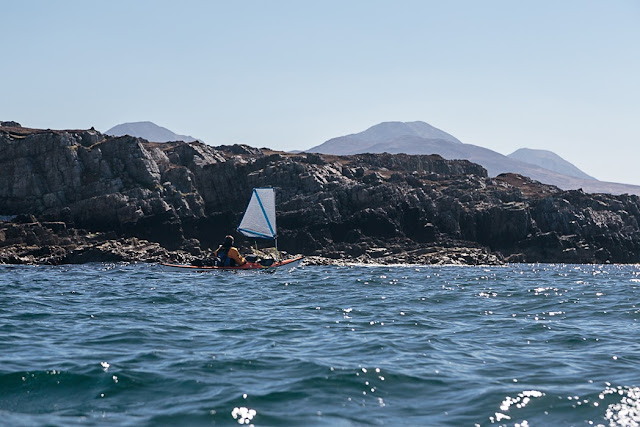 As we travelled south the Paps of Jura heaved above the horizon. The rain that falls on these... 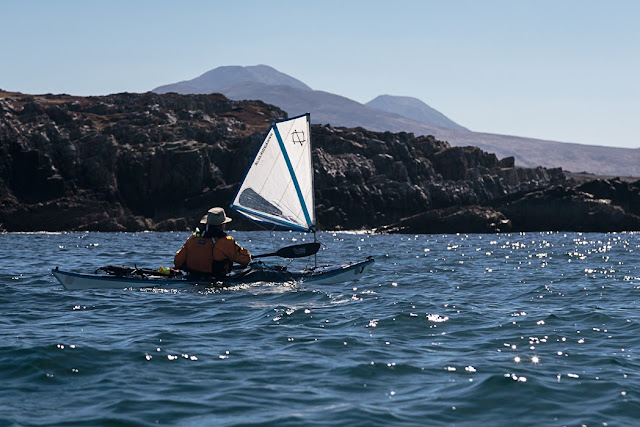 ...mounds drains into the burns that are used to make our favoured tipple, Jura malt whisky. 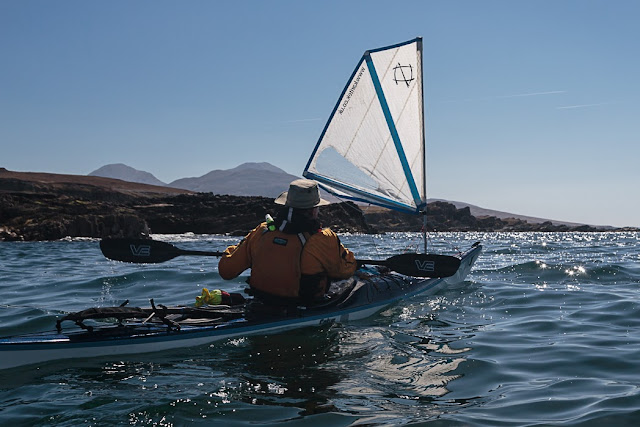 ...at Brein Phort (stinking port) but since the map was drawn, what was shown as sandy beach is now just a boulder beach. 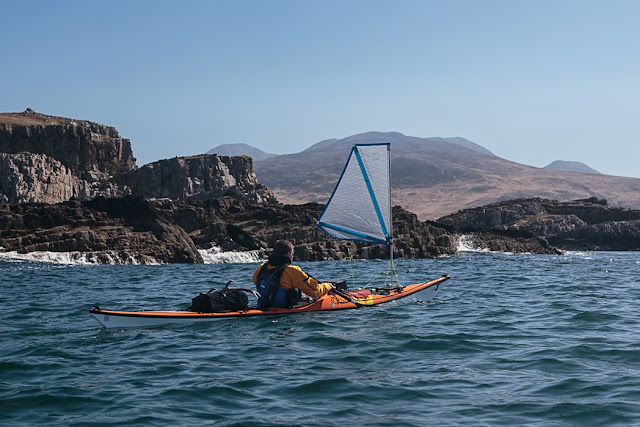 A little further on we rounded the headland of Ruantallain, which marks the northern boundary of entrance to West Loch Tarbert, a deep sea loch which nearly bisects Jura. Under the cairn on the skyline is the cave of Corpach Rubh' an t-Sailean (place of the corpse at the point of the inlet). This was one of the caves where corpses were stored until safe passage could be made for burial on the holy island of Oronsay. No doubt by the time the corpses could be transported they would be stinking to high heaven. Perhaps that is why the local port was called stinking port, or perhaps it was because the port gathered seaweed washed up after winter storms, who knows? 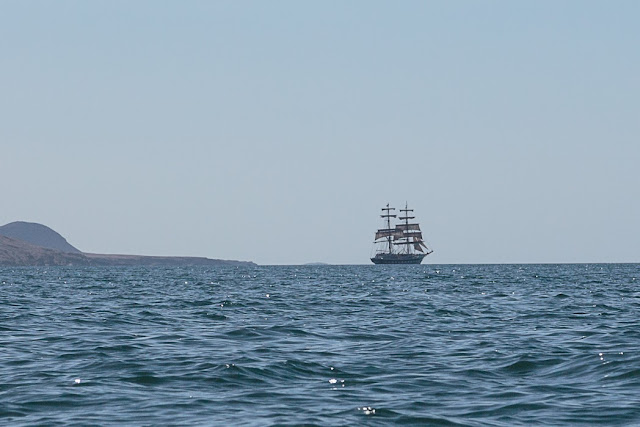 As we crossed the wide mouth of West Loch Tarbert, the British sail training brig STS Stavros S Niarchos drifted up the Sound of Islay being carried by the tide. She spent the night anchored off Colonsay and we would get a better view of her the next day as she made her way back down the Sound of Islay on her way to her current home port of Greenock. 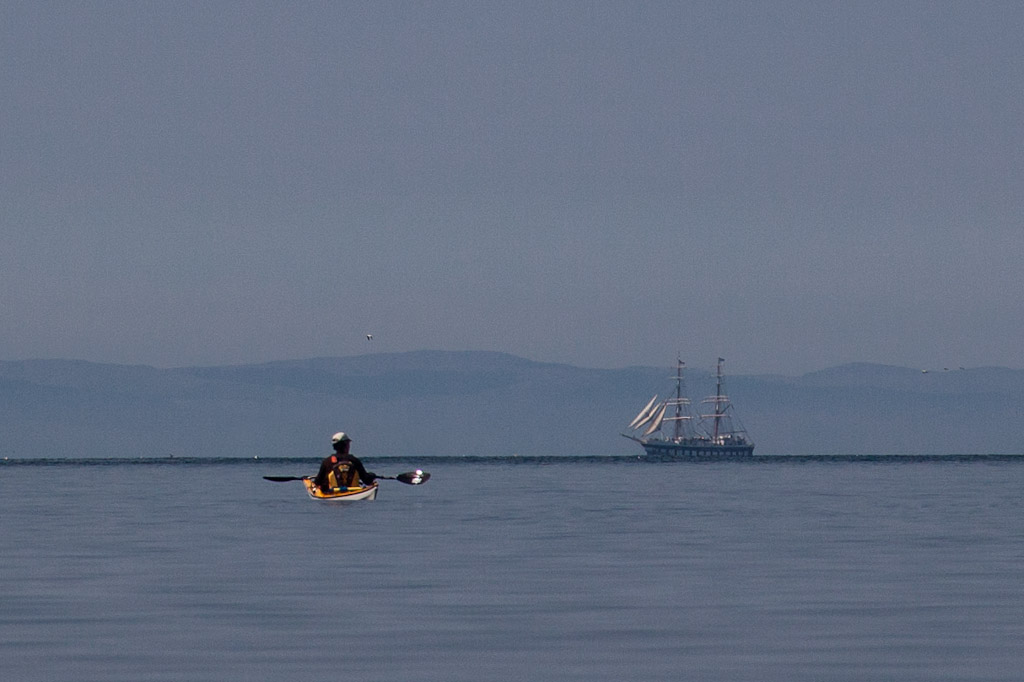 Tony, Phil and I have crossed wakes with the Stavros S Niarchos several times over recent years such as on this occasion on 24/5/2012 off Ailsa Craig in the Clyde. She is named after a Greek shipping tycoon and philanthropist. 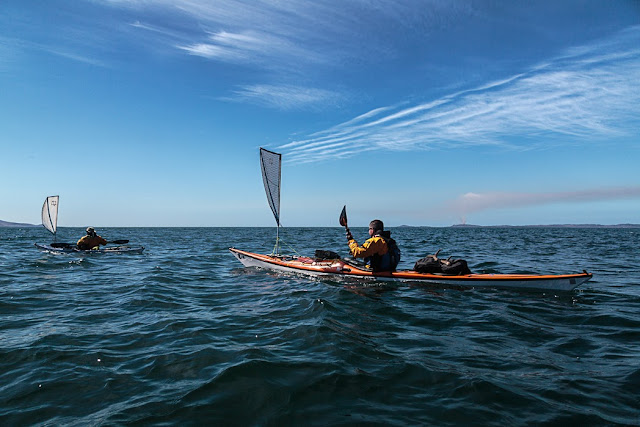 As the wind sped us down the coast of Jura, we could see a great plume of smoke...

...rising from two muir burns on Colonsay. Impressive though this plume was it would have been dwarfed by the plume when our ancestors visited Colonsay 9,000 years ago. In one autumn they cut down all the hazel trees on the island then roasted all the nuts in a huge fire pit, then left. Scorched earth or what?

When we crossed to the south side of west Loch Tarbert we had covered 9km without a break. We badly needed a stop to stretch our legs so we landed at an unnamed beach beside Rubha Lang-aoinidh (the falsely steep point). Well judging by both Ian's and Mike's  expressions they were rather disappointed at their first arrival on Jura's west coast. Indeed I propose to name this beach. From this day forth, let it be known as not as disappointment beach but as Brein Phort Deas (south stinking beach!). Holey Moley this beach was stinking. In fact it was fair minging. I couldn't see rotting corpses of any ancient Juraburghers so I suppose it was just a collection of rotting seaweed. Whatever, we did not stay and I could see that Ian and Mike both thought the highlight of their day had already passed. However, I knew better, I had been this way before (several times before in fact)!.....