Work and play in Culzean Bay. 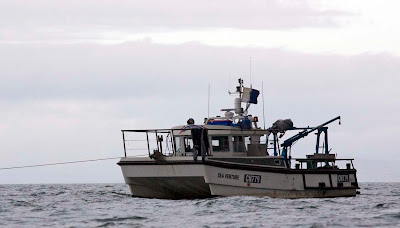 Leaving Culzean Castle, we continued NE across the sand rimmed Culzean Bay. We came across this catamarn fishing vessel. She is the Sea Venture and she has applied for membership of the Responsible Fishing Scheme. Although registered in Campbeltown, her home port is Carradale some 55km away, on the far side of Arran. 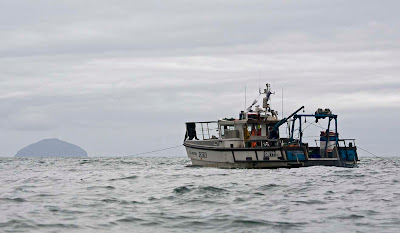 She was lying to two anchors and appeared to have been dredging for shell fish as the crewman was sorting his catch on a riddle. Possibly she was fishing for razor, shells though the sustainability of harvesting these slow growing bivalves in the Clyde and effect on other species is not yet established. Razor shells are seldom eaten in Scotland though they are in great demand in southern Europe.

We exchanged waves with the crewman as we passed. We left him hard at work on the riddle and we made our way north east to Dunure, where we had an appointment.