Sea kayaking across the Sound of Bute from Portencross to Brodick. 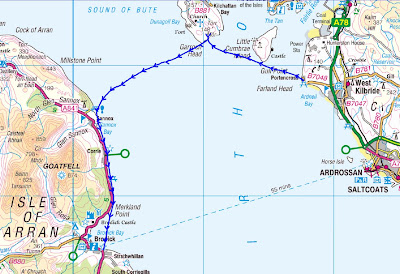 A 30km day paddle from Portencross on the Ayrshire coast to Brodick in Arran with return by the ferry.

Paddling from Garroch Head on Bute across the Sound of Bute to Sannox on Arran.

Tides: On the ebb tide there is a tide race off the south end of Garroch Head. This can be rough if there is any south in the wind. The south going ebb starts about -0035 HW Greenock and the north going flood starts about -0035 LW Greenock but these times are very variable being influenced by how much rain and snow melt is entering the estuary. Sometimes there may be almost continuous ebb, especially east of Garroch head. Spring rates are 1 knot but are influenced by rain as above.

We met before dawn.

We set off on a limpid sea.

The Pavlovian sound of splashing paddles.

First luncheon and a first paddle in the Cetus MV.

Thank the Lord, for the Ortlieb Aqua Zoom bag!
Posted by Douglas Wilcox at 9:32 am 2 comments: