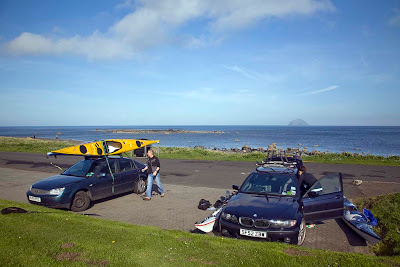 It has to be said that the staff of seakayakphoto.com are not the greatest exponents of open crossings. This is not wholly due to our well developed senses of self preservation. Out on the open briny there is not a great deal to photograph, which kind of defeats being a seakayakphoto.comer.

Ailsa Craig is worth the effort to get to. It is one of the World's great sea stacks. Like a sentinel of the sea, its great monolith rises at the entrance to the Firth of Clyde. Unlike many sea stacks, which are hidden away in remote places, Ailsa Craig is visible to anyone who visits the populous Ayrshire coast. Its dramatic outline rises to 338m and, for much of its 3.7km circumference, the first 100 meters rise sheer out of the sea. Despite its arresting appearance, the current island is but a shadow of its former self. Some 61.5 million years ago it was a giant volcano 3.5km high! Then, during the Ice Ages, the huge glaciers that swept south from the Scottish Highlands carved out the softer rocks of the Firth of Clyde basin and carried away the volcano’s ash cone. It left only the hard micro-granite rock of its volcanic plug. Fragments of this were carried by the ice as far south as Wales, where they can be found today, as erratic boulders.

Ailsa Craig lies 14km off the Ayrshire coast and the spring tide rate is only about 0.6kn so it just requires some repetitive paddling movements to get there and then, hopefully, about the same number to get back.

However, the weather round these parts tends to change quite quickly so there is a degree of commitment in making this trip. 24 hours before this photo was taken, there was a force 6 SE wind.

The BBC coastal forecast was for:

Fortunately the forecast was pretty accurate.....

Thanks to Steve (Ceegee) for help with the right age of Ailsa.