Down town sea kayaking in Dumfries! 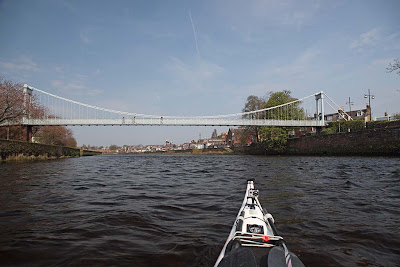 On our search for the bore of the river Nith we launched in the town of Dumfries, which is the historical lowest crossing point of the river. We paddled upstream at first, under St Michaels road bridge and the Nith suspension footbridge which was opened in 1875 and restored in 1985.

We got up as far as some gravel beds just below the tidal weir. Beyond this is Devorgilla's bridge. This dates from 1432 though it has been repaired many times since then. It is now only used as a foot bridge. It is named after Devorgilla , the mother of John Balliol who was a "puppet" King of Scotland, chosen by Edward I of England. 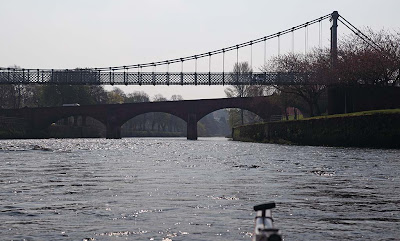 We now turned our bows in the direction of the flow and were soon... 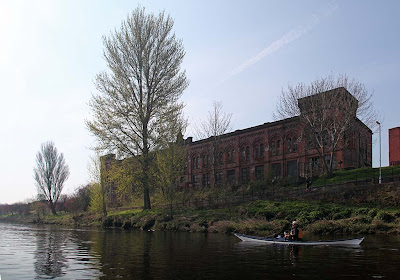 ...speeding down stream past the old Rosefield textile mill of Dumfries. Its doors have been closed since the depression of the 1930's. 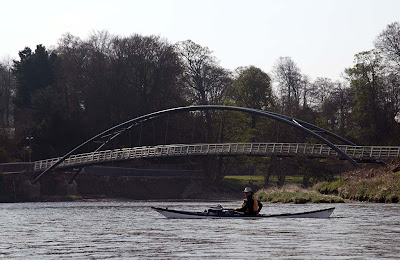 We then passed under the lowest bridge over the Nith. This is the Kirkpatrick MacMillan Bridge, which opened in 2006. It is a cycle and footbridge and forms part of the National Cycle Network. Sadly this bridge has blocked access for any large or masted vessel to the historic quay in Dumfries from which we had just launched.

Thanks to watret2 for correctly identifying the Kirkpatrick Macmillan bridge!