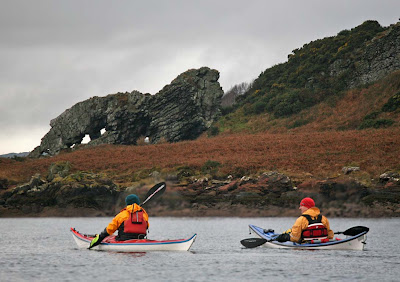 At the south east corner of the island of Great Cumbrae, in the Firth of Clyde, there is a peculiar rock formation (mimetolith) known as Lion Rock. It is composed of a very hard and fine-grained type of basalt only found on the island and is known as cumbraite. It is a volcanic dyke that dates from the relatively recent Eocene period. The dyke reappears on the other side of the Fairlie Roads near Hunterston power station. The deep water channel in the Fairlie Roads, which allows huge ore carriers access close to the shore, was cut by glaciers in the Ice Ages.

Of course the locals do not believe a word of this. Apparently the Lion was made by the bad elves. Elves are not known for their good sense and apparently they are terrified of lions. To this day, no elves can be found on the east side of Great Cumbrae though, if you know where to look, they are still quite populous on the west side.