You're not paddling down here son! 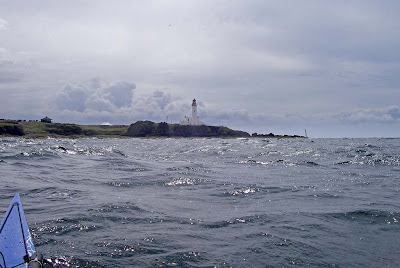 Regular visitors to these pages will know that our local, and most frequently paddled waters, are those of Ayrshire's Carrick coast. Well last weekend, Tony, David and Phil went for one of our usual outings on the coast between Dunure and Turnberry. 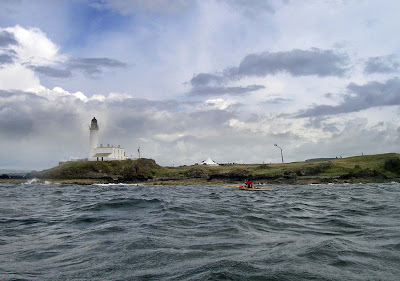 No sooner had they rounded the Point than an all black RIB roared up at high speed. It was manned by big blokes in all black drysuits with dark glasses and black berets with big, black automatic guns.

"What do you think you're doing?" the leading maritime, anti-terrorist officer asked politely.

Tony looked at the kayaks and then at the sea before giving a considered and equally polite reply, "We're paddling."

Never taking his eye off Tony's paddling knife, the man in black replied (even more politely this time) "Well you're not paddling down here son."

Obviously outgunned, Tony, David and Phil turned their bows and made their way reluctantly back to the pub at Dunure.

With good excuse, David and Phil spent some time appreciating the Guinness in a very crowded Dunure Inn. They were soon perspiring in their brightly coloured dry suits, (Phil in red and David in plum). After a time, their mood was lifted when a female American golf journalist asked for their autographs!

Photos by Tony.
Posted by Douglas Wilcox at 5:39 pm 3 comments: