A tale of two lighthouses. 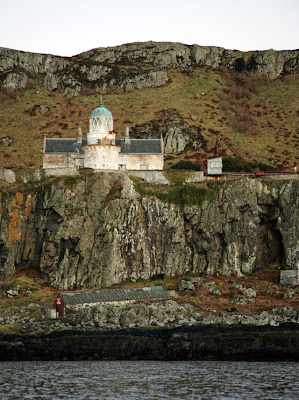 "I heard you on the wireless back in Fifty Two
Lying awake intent at tuning in on you.
If I was young it didn't stop you coming through."
-Video killed the radio star. The Buggles.

Paddling in the pitch black last night I found my self humming the above song. In the darkness we were particularly grateful for the flashing light buoys that mark the Hunterston shipping channel. This was despite the reassuring glow and precise information about our location and speed from my GPS. This got me thinking about lighthouses such as the one above which is situated on a raised beach on the west coast of Little Cumbrae in the Firth of Clyde.

This magnificent building was constructed in 1793 to a design by Thomas Smith. The work was supervised by a Glasgow university student, Robert Stevenson, who was later to marry Smith's daughter. 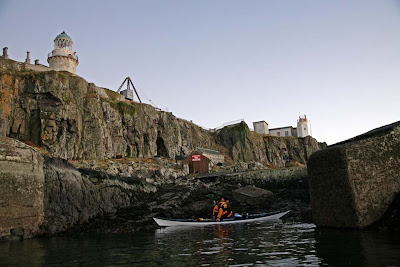 Sadly the light is no longer active. It was replaced by a simple concrete tower in 1997. The current light is a white flashing light with a period of 6 seconds. Despite its youth, this tower looked in worse condition than its venerable predecessor. Is this a story similar to the "Twa brigs o' Ayr"? Does anyone remember when you could get an electric kettle fixed? Nowadays many things things are not built to last. It seems this would include lighthouses. Has it been purposely built with a short lifespan because the Northern Lighthouse Board know something we do not?

Has GPS killed the lights?
Posted by Douglas Wilcox at 11:00 pm No comments: