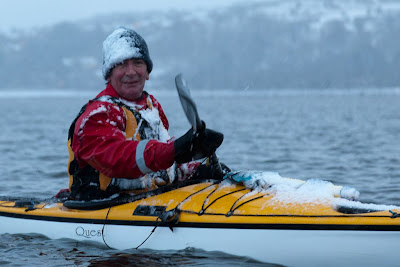 As we approached Port Glasgow, we passed row after row of black stakes sticking up out of the mud flats. You can just see them along the snowy beach behind Phil. These were the "timber ponds", which stored green timber until it was seasoned for the ship building trade. They were constructed in the early 18th century as timber began to be imported from Europe and North America. The ponds reached their peak, importing 28,000 tons per year in the 1830's but began to decline with the import of pre-seasoned timber and increasing use of steel in shipbuilding. Use of the ponds finally ceased by the outbreak of WW1 in 1914.

As darkness fell, we were nearly back at Port Glasgow. The Ferguson shipyard crane above Newark castle acted as our guide. Just to the left of the green navigation light, through the gathering gloom, you can just make out the last of the Clyde's four surviving Titan cranes. It stands 3.5km to our west at Greenock's James Watt dock. It was built by Sir William Arrol in 1917. The dock is named after a Greenock man, James Watt 1736-1819, who made the steam engine practical and economic by inventing a separate condenser. This meant that the cylinder did not need to be wastefully heated and cooled with each piston stroke.

Either an eddy or an early flood tide was sweeping through the pillars of Lamont's pier at Newark. Jim went through first but crossbeams were just under the surface and he was caught fast, rocking on his Sea King's V bottom. Much bracing and reversing saw him extricated from the pier. 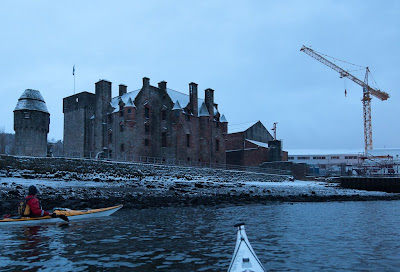 We landed beneath the walls of Newark castle. Parts date from 1458 and were built by George Maxwell. The castle was built here to control the highest point of navigation on the Clyde. Prior to the river being dredged, all goods bound for Glasgow needed to be off loaded here. Until recently the castle was hidden away between two shipyards, Ferguson's to the west, which is still there and another huge yard, Lamont's, to the east. When I first visited Newark Castle in 1972, we had to walk down a long, narrow close between two high ship yard sheds. The joke at the time was "only in Port Glasgow could they build a castle in such a well hidden spot"! Lamont's built several CalMac ferries, including the MV Jupiter in 1973. She plies the nearby Gourock/Dunoon route to this day. Lamont's built their final ship in 1978. The yard was then cleared in the 1980's and east half of the castle reemerged into a post industrial dawn. 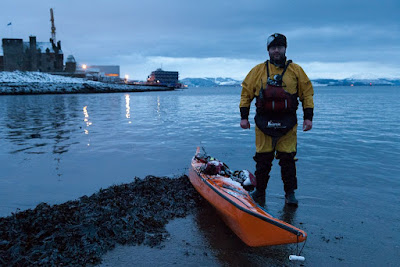 We emerged from the kayaks in a frozen state, our dry suits were stiff as boards. We had landed on the old slipway of the Lamont's shipyard. In the distance, behind the castle, the crane and lights mark Ferguson's shipyard, which is the last surviving yard on the lower Clyde. Most of the current CalMac fleet (even the larger ships such as MV Isle of Lewis 101m, 1995 and MV Hebrides 99m, 2000) were built at Ferguson's). The "tower block" to the right of the castle is actually Ferguson's most recent construction, a huge barge, the ASV Pioneer, which is an accommodation and service vessel for the oil industry.

The steel hulled sailing vessel Glenlee, which we saw higher up the Clyde, was also built in Port Glasgow, in 1896 at the the Anderson Rodger and Co Yard.

In 1812 Henry Bell chose to have his paddle steamer Comet built in Port Glagow, at the yard of John Wood in Shore Street (a little to the west of Ferguson's Yard). Comet was a wooden steam paddle passenger steamer. She served on the Clyde and on the Glasgow/Fort William runs. In 1820 she was shipwrecked after being caaught in the Dorus Mor tiderace and dashed onto the rocks of Craignish Point. Wood's yard later became Lithgow's East yard, which closed in 1972. In 1962 the apprentices at Lithgow's built a full sized replica of the Comet, which is on permanent display in the centre of Port Glasgow. The site of Wood's/Lithgow's yard is now a Tesco supermarket, which says a great deal about the British economy. 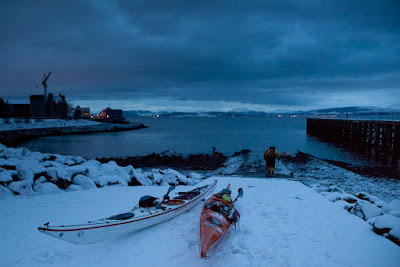 Lamont's slipway has seen countless ships trundle  down into the sea to commence their voyaging. This night it was treacherously slippy as we ended our voyage and I was very grateful for Phil and Jim's help to get my kayak up to the cars. 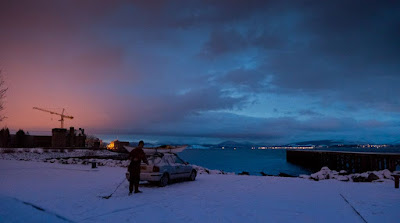 It was so cold we could hardly feel our fingers doing up the straps on the roof racks. 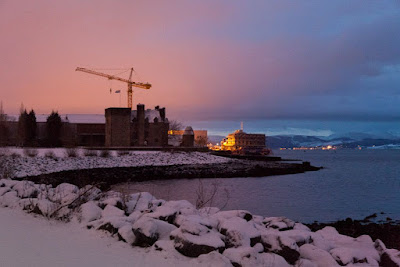 It was strange to reflect upon how much I had discovered about my home city by sea kayak! We passed within 10km of my house, within 300m of my workplace and within 1.3km of Jim's house and right by several yards where Jim has worked! 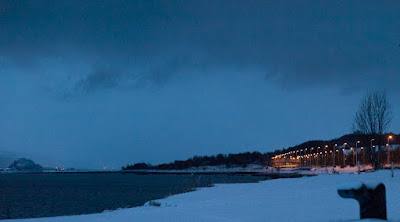 On the other hand, the river had made Glasgow and allowed her to develop as a maritime trading city and centre for ship building. Perhaps then, a sea kayak is the very best way to discover a city like Glasgow! We were passing through the Clyde in a period of post industrial change. Yes there were still areas of industrial wasteland but these were outnumbered by those areas of regeneration with new financial, media, educational, hospital, retail, recreational and residential buildings. It was nice to see the preservation of some of the industrial machinery such as the Clydebank Titan crane and I am sure the new Transport Museum will be superb. I sincerely hope the three surviving shipyards are enough to remind a post industrial city of shoppers that their city was once a cradle of the Industrial Revolution and of the significance of the words "Clyde built". 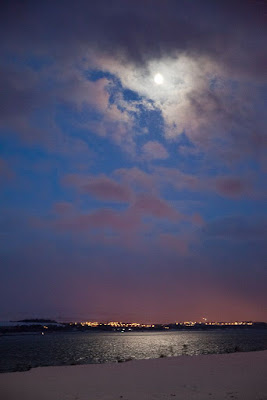 As a postscript, many friends have asked "what about the water quality"? Well the water was fine. We found seals, herons and cormorants right in the heart of Glasgow. In the whole length of the Clyde, we only saw a few pieces of plastic rubbish. I have seen much more on a single small beach on Skye. We didn't even have a brown ring round our hulls, which you can still get in some apparently remote highland lochs where the villages have inadequate sewage treatment.

The last few photos were taken handheld long after sunset and in freezing conditions, they are included just to portray the atmosphere of a cold night on the Clyde, they are a bit shakey!
Posted by Douglas Wilcox at 8:38 pm 9 comments: