Sammy porpoise leads us on to Maclean's skull bay! 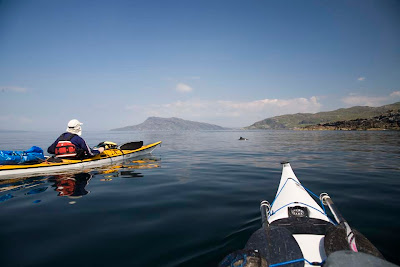 Having tarried long on our idyllic resting spot it was now time to continue our journey round the north of Jura. Ahead lay the brooding bulk of Scarba, gatekeeper to the great Gulf of Corryvreckan and its tides and whirlpools. Fortunately Sammy porpoise acted as our guide all the way to Glengarrisdale Bay, our final stop before entering the maelstrom. 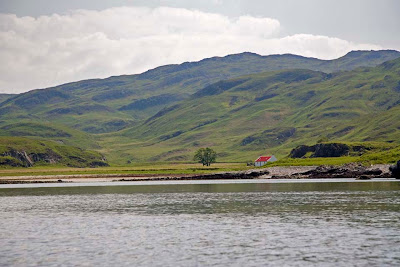 If you want to avoid some very smelly mud and slippery rocks at low tide, it is better to land at the east side of the bay and not the west as we did. 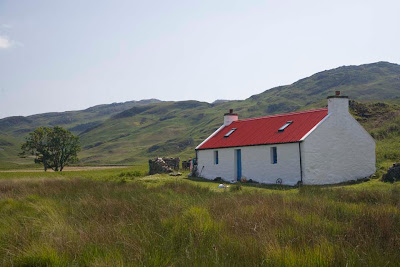 The former shepherd's house was finally abandoned about 1947 and is now a well maintained bothy. When we visited there was a large party in residence. They had been brought in by boat and had a huge supply of alcoholic beverages. Strangely, they had almost no food. 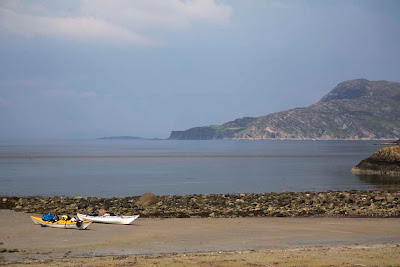 Looking from Glengarrisdale Bay across to Scarba. The Garvellachs can be seen to its left. The entrance to the Corryvreckan is on the right. 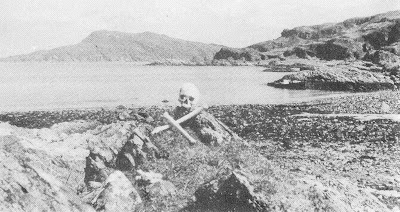 A gruesome skull and femurs sat on a rock at the edge of the bay for many years. They disappeared in the 1970's. The skull had a "sword" cut in it and allegedly belonged to one of the defeated Macleans from the 1647 battle. Modern legend says it was situated in Maclean's skull cave at the east of the bay. However, in John Mercer's book "Hebridean Islands, Cononsay, Gigha, Jura" published in 1972, the above photo shows the sad relics on a rock at the west end of the bay. Their current whereabouts are unknown.

We now had an appointment with the Corryvreckan.....
Posted by Douglas Wilcox at 8:57 am 3 comments: