The red flag is flying high over Kirkcudbright Bay.

Although our destination was Little Ross Island.... 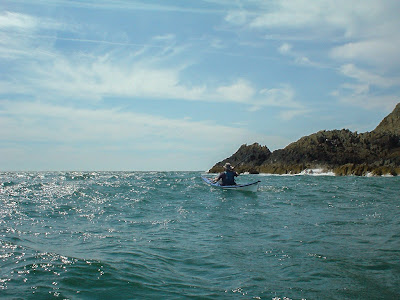 ...we paddled out through Little Ross Sound and past Fox Craig to... 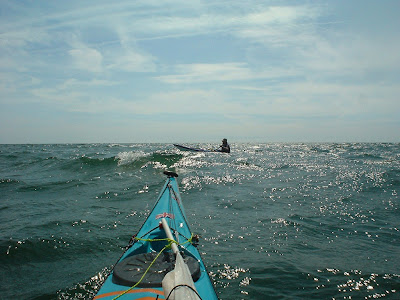 ...the open Solway Firth beyond.. There is a tidal anomaly in the Sound. During spring tides the current generally flows south in the Sound during both the ebb and the flood. You are almost guaranteed some interesting wind over tide conditions here in the prevailing SW winds. It was easy to see why the other boaters had stayed within Kirkcudbright Bay. 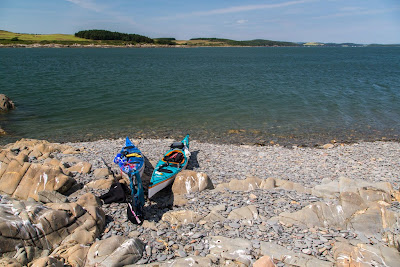 After some fun in the Solway we paddled back through the Sound and into the lee of the north end of Little Ross Island. 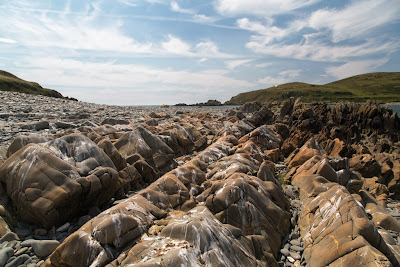 During the early part of the year this is a gull nesting colony but the chicks had all fledged and the rocks were deserted. Their guano and the smell well the only reminders of the frenetic bird  activity during the Spring. 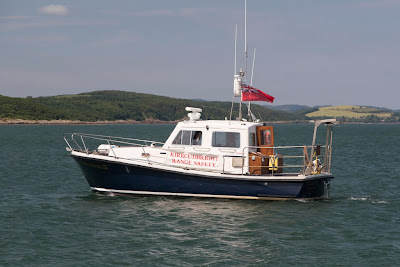 We had noticed the MV Gallovidian III had been anchored a little way offshore. Her skipper Gary McKie upped anchor and motored across to within hailing range. The Gallovidian III is the Kirkcudbright Range safety boat. Gary hailed us to ask if we knew the range was being used for live firing. Over the AKA AKA AKA and Crump Crump of small and large bore firing, we reassured him that we did.

In fact Tony and I had originally intended launching from Abbey Burn Foot (at the east end of the range) and paddling west to Little Ross Island. However, the red flags round the range were flying and the access road was blocked.
Posted by Douglas Wilcox at 3:23 pm No comments: