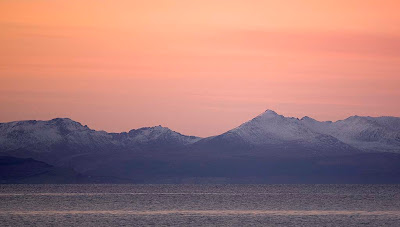 We launched from the shingle beach at Dunure just as a pink glow appeared behind the cold snowy ridges of Arran. Although the sun had set 15 minutes before, the summit ridge of Goatfell was still catching rays from below the horizon. 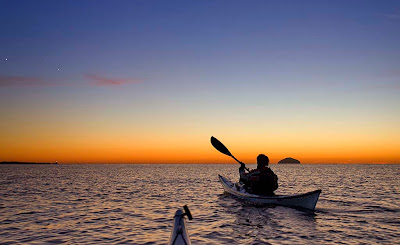 We set off for Maidens guided by light from Venus, Jupiter and Turnberry lighthouse. We were surrounded by six other lighthouses: Ailsa Craig, Sanda, Davaar Island, Pladda, Holy Island outer and Lady Isle but the first three were unseen as they were below the horizon like the now departing sun. 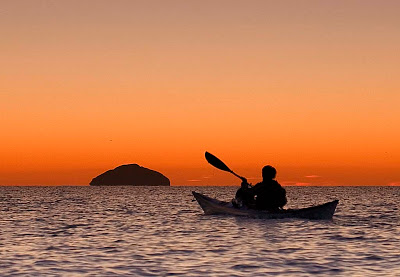 As the light faded the horizon darkened from deep orange to blood red. 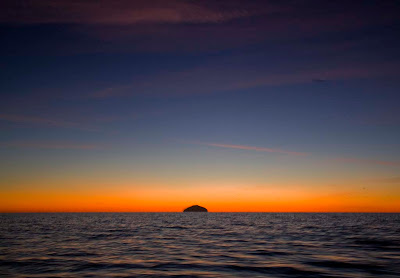 An hour and fifteen minutes after sunset the horizon still betrayed the long gone sun. Flocks of sea birds swirled out of the darkness on their way out to sea but the slow shutter speed (1/6s) has all but failed to capture them. Ailsa Craig still dominated the land and sea but its bold outline was soon to merge with the darkness above. Far from land, the clear skies gave one of the best views of the Milky Way we have ever seen. 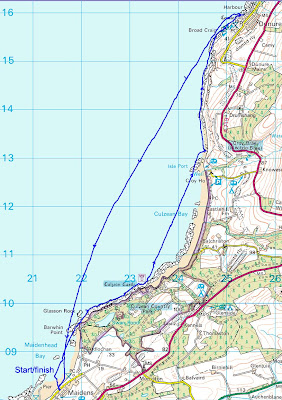 We landed at Maidens two hours after sunset. It was very dark and minus three degrees Celsius but what a fantastic time to be out paddling!