Longships at Largs: past and present. 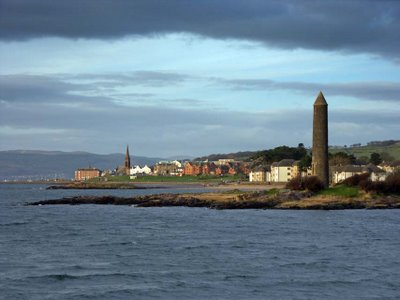 The "Pencil" commemorates the site of the Battle of Largs in 1263. The Vikings in Orkney heard that the Scots had become interested in the "Lordship of the Isles", which consisted of the Hebrides and Kintyre. The Lordship was only nominally under Viking control but the thought of a Scots invasion sent their longships south.

After King Haakon IV of Norway made his way through Kyle Akin, the straight between Skye and the mainland, he led his fleet to the Firth of Clyde where King Alexander III of Scotland waited for him. An autumn gale got up and grounded some of the longships. While the Scots attacked the stricken vessels, the main Viking fleet was unable to land its troops in the storm. After five stormy, days King Haakon withdrew the rest of his fleet back to his base in Orkney. He planned to return in the spring but died during the winter. The balance of power had shifted and the Scots regained dominion over the Hebrides.

The Clan Donald were the successors of the Celtic hero Somerled (c1100 - 1164) who was the first "Lord of the Isles". They ruled the Hebrides at first under the Vikings and then under the Scots until 1493. Ironically, for a Celtic clan, their male descendents have been shown to carry a Viking Y chromosome. 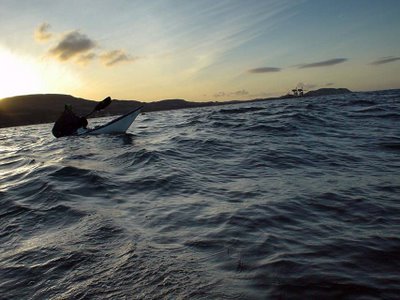 Today Largs is one of the most popular venues for Scottish sea kayakers. The Cumbrae Islands are not far from shore and the Isles of Bute and Arran lie beyond. However, the apparently sheltered waters are subject to unpredictable winds, which channel through the islands and surrounding hills. Viking longships are not the only vessels to have come to grief here. Despite its attraction to beginners, many sea kayakers have found themselves taking an unexpected swim. On three separate occasions that I have been paddling here, there has been a swimmer. 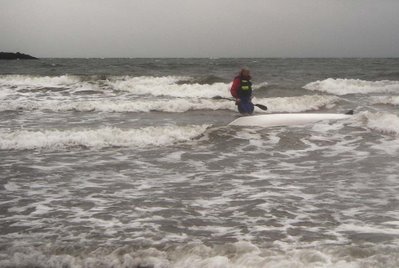 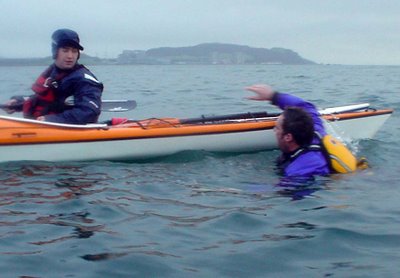 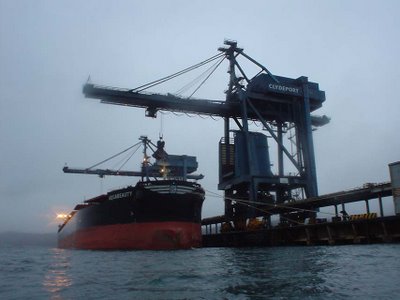 Weather conditions are not the only thing sea kayakers need to be aware of. This is a busy deep water shipping channel. Note the kayaker under the bow of the ore carrier Aquabeauty. 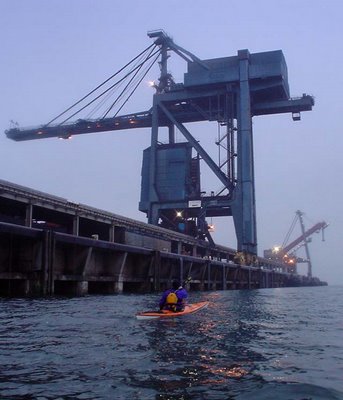 Hunterston ore terminal is the deepest water dock in Europe. The jetty runs for one mile out into the channel and it can handle ships up to 350,000 tons. Aquabeauty is a relatively small 170,000 tons. The cranes can off load 2,400 tons of coal or iron ore per hour.
Posted by Douglas Wilcox at 9:51 pm No comments: