Charcoal and herons in the Burnt Islands. 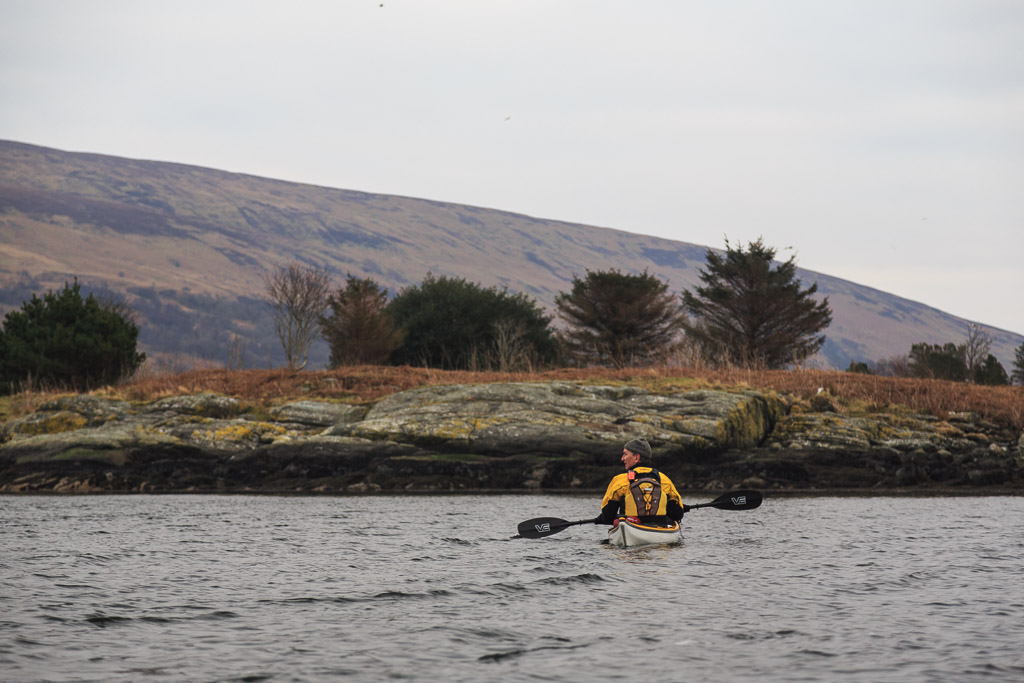 From Eilean Dubh we paddled across the north end of the Kyles of Bute to the delightful Burnt Islands. The first we came to was Eilean Fraoich (Heather Isle). 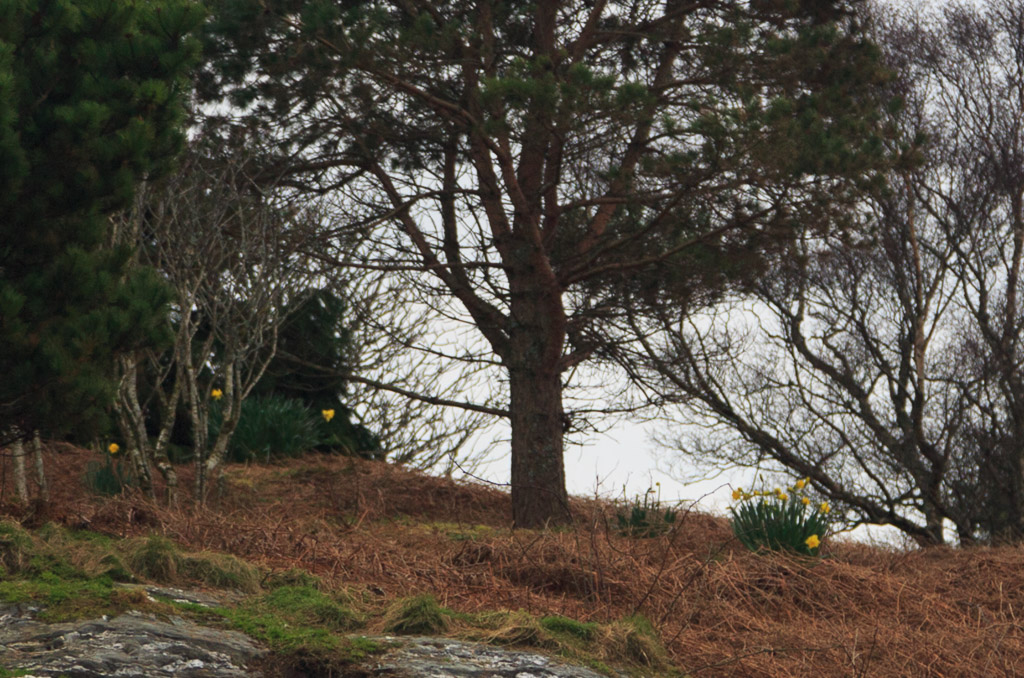 The daffodils were out and it was only the 14th of March. There was little sign of any heather however. 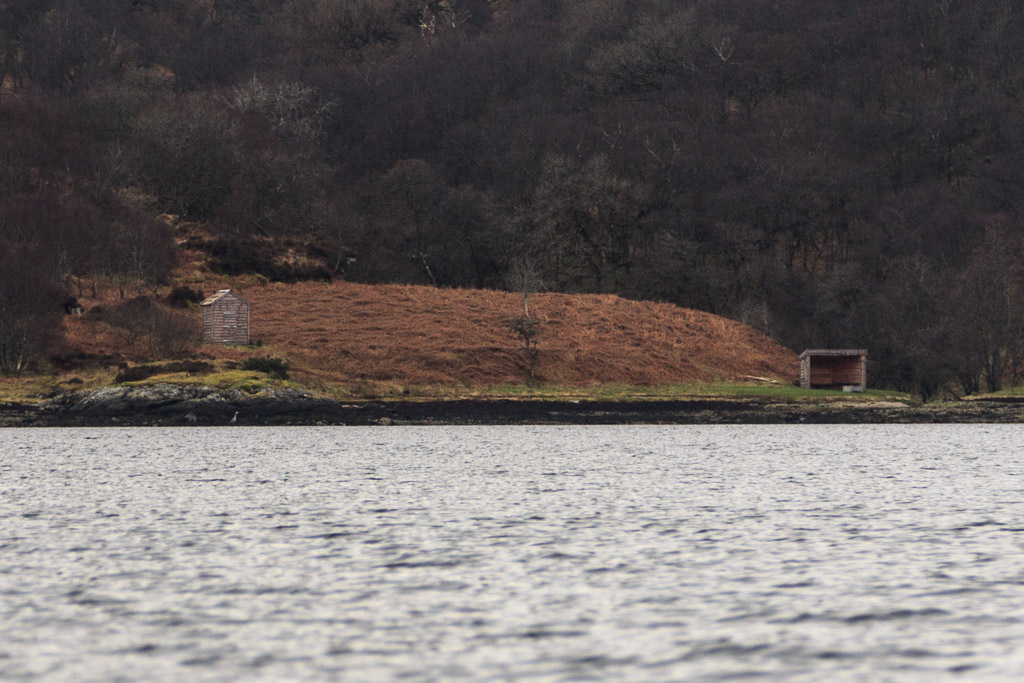 Looking over the Kyles of Bute to the Bute shore we could see the new composting toilet and cooking shelter that has has been provided for those that follow the Argyll Sea Kayak Trail. The west going tide had already started so we worked our way uptide close to the island before crossing... 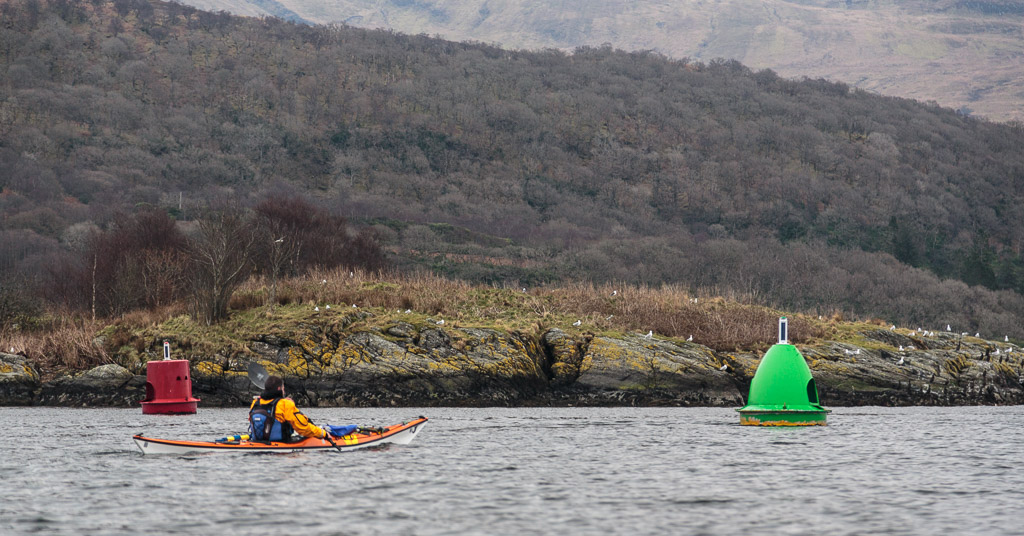 ...the shipping channel which is clearly marked by red and green cans. 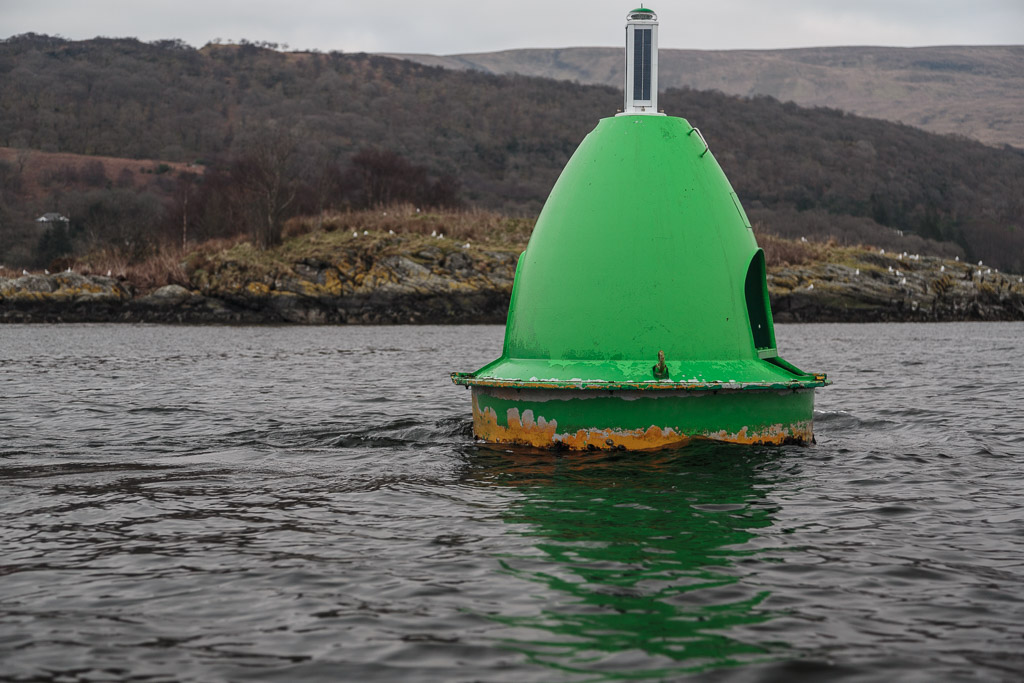 The tide had just started running so was very gentle but it rips through here at 6 knots on a spring tide. Our destination was Eilean Buidhe (Yellow Isle). 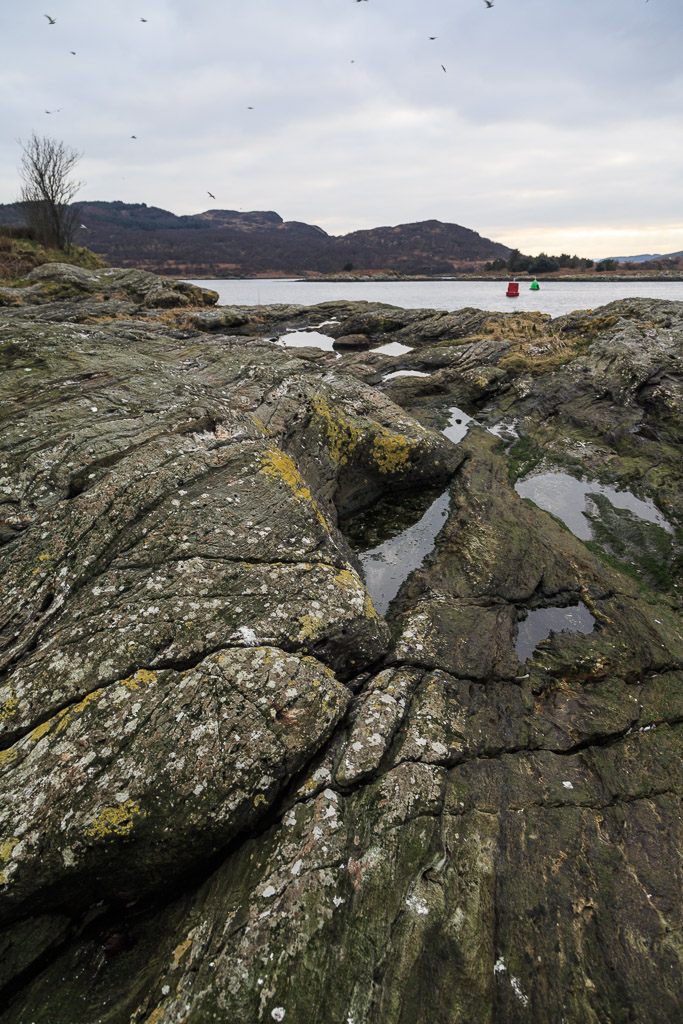 We landed on rocks at the north end of the islands. Although the rock hereabouts is... ...very interesting, composed of contorted lichen covered swirls, it was not the purpose of our visit. Ian and I  braved bramble covered defences to ascend to the south point of the island. Here are the grass covered remains of a vitrified dun (fort). Its circular walls are 4m thick and enclose an inner area nearly 20m in diameter.It was extensively excavated by JH Maxwell in 1936. He found a thick layer of charcoal at the base of the vitrified walls which was presumably the source of the combustion process that fused the stones of the wall together.

From the dun we had a good view over the Kyles to Eilean Mor which is the largest of the Burnt Islands. Some years ago Mike and I camped on Bute just on the far side of Eilean Dubh. We suffered one of the worst midge attacks we have experienced anywhere. Then we were kept awake most of the night by the cacophony from the large heronry which takes residence in the island's trees in the summer. 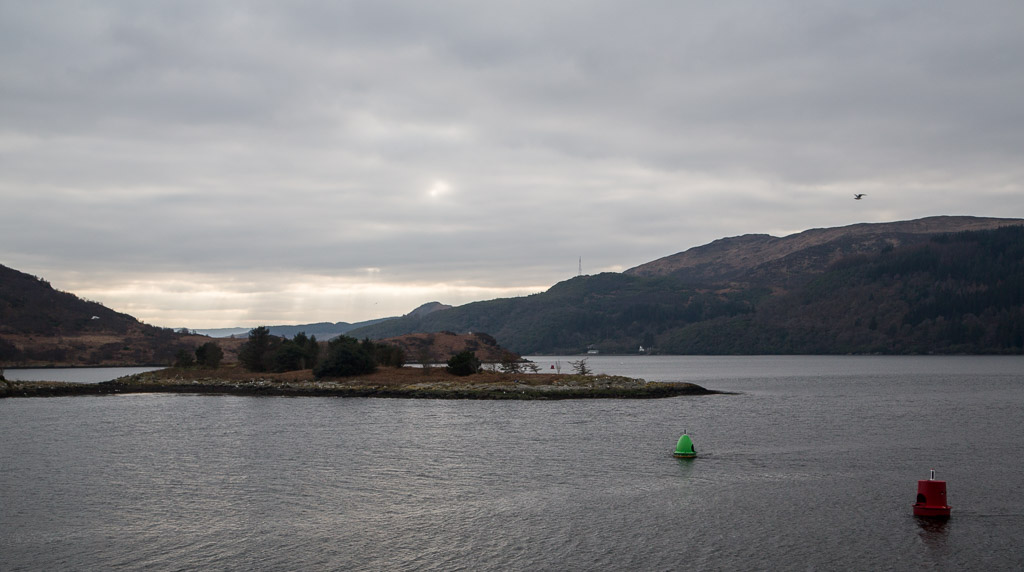 The dun also affords a good view over Eilean Bhuidhe to the West Kyle beyond. It must have been a great location for a fort. 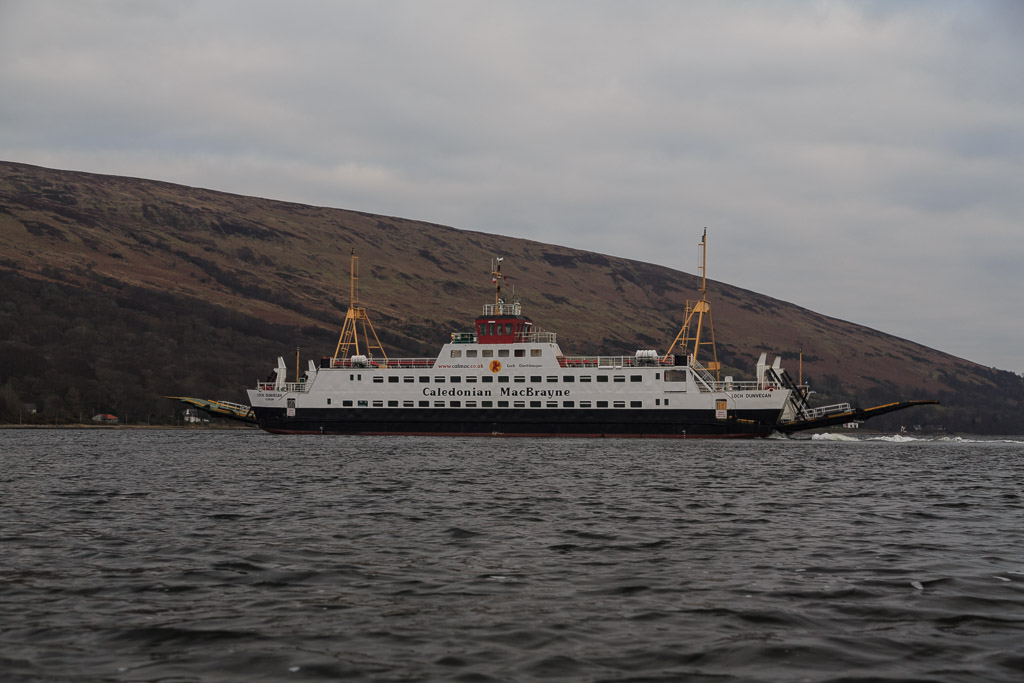 Leaving the Burnt Islands we just had a short trip down the East Kyle to Rhubodach, the Bute ferry terminal  where we had left the cars. An easterly wind got up and we launched the sails. I was able to leave the others far behind by using the forward fin on the Aries. However the others caught up as I had to wait for the ferry MV Loch Dunvegan to leave her berth.  I remember using the MV Loch Dunvegan to cross to Skye in the days before the Skye Bridge was opened in 1995. She was built in 1991 at Fergusons Yard in Port Glasgow. After leaving Skye, she was relief vessel on various crossings until she moved to the Kyles of Bute route in 1999. 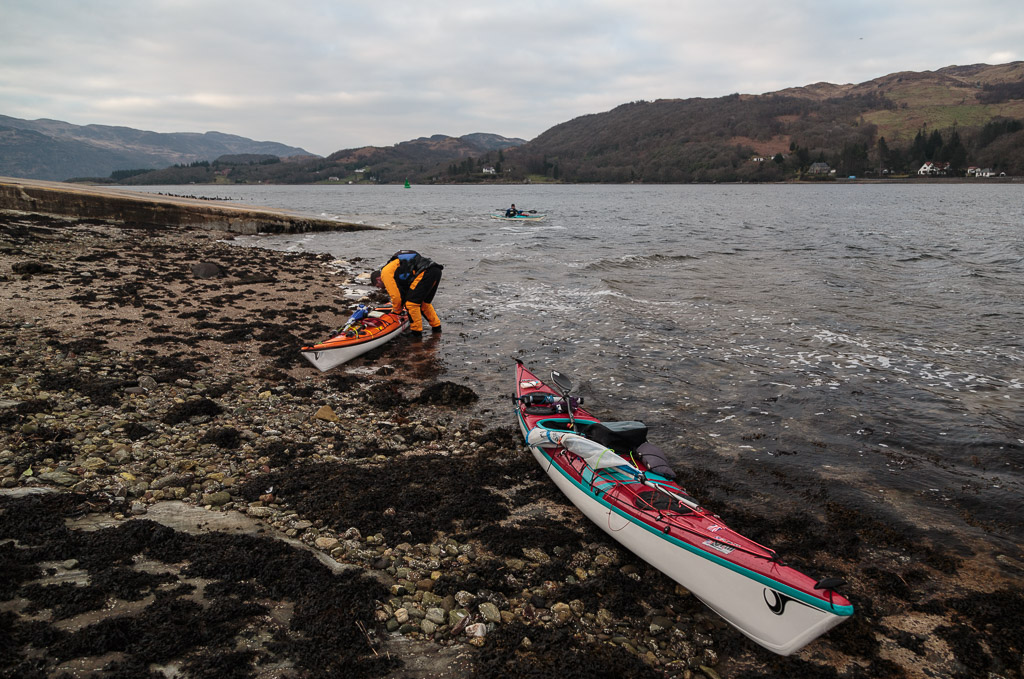 We landed just to the east of the ferry slipway, a few metres from the cars. 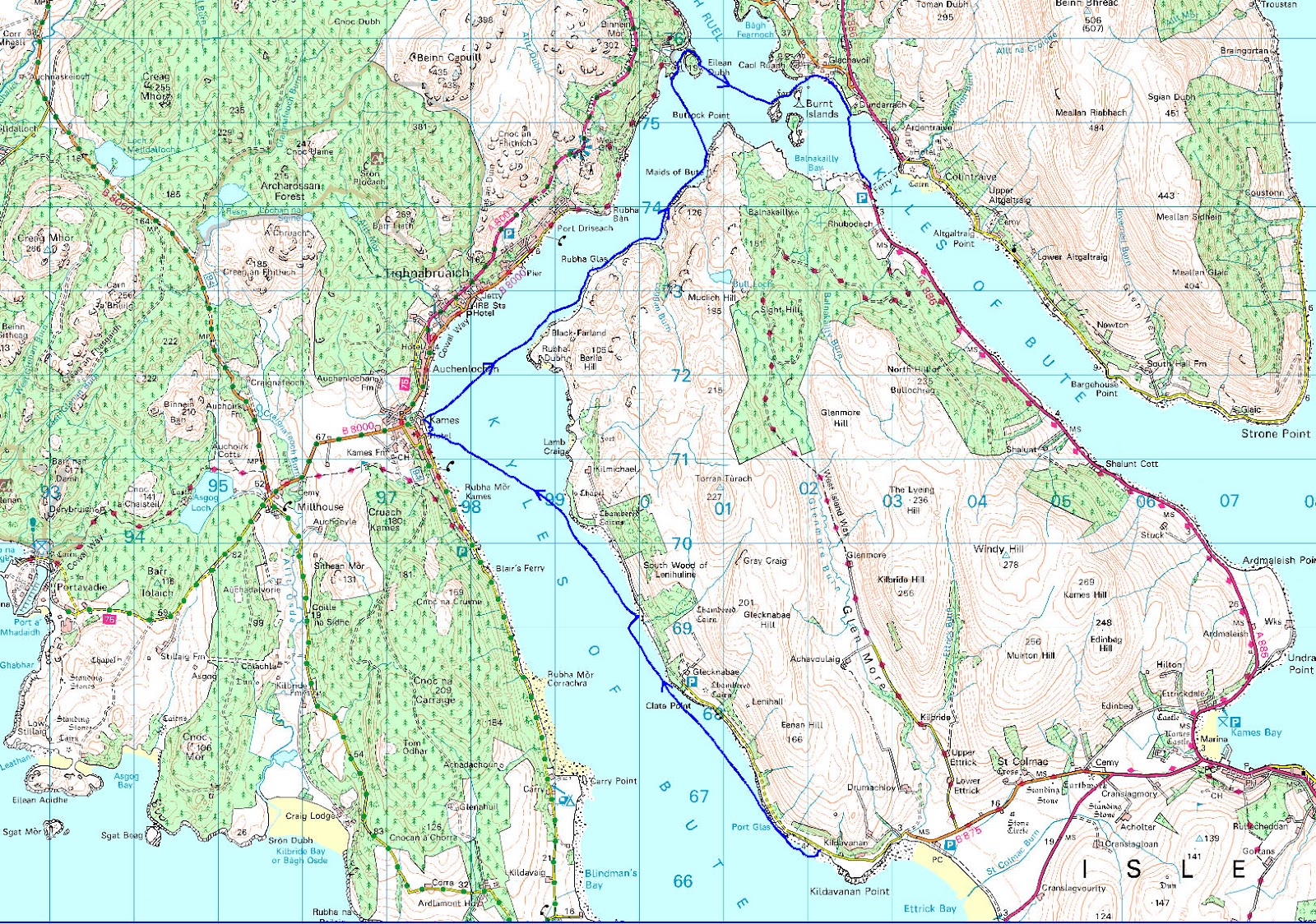 We had enjoyed a wonderful day in the Kyles of Bute. We may only have covered 18km but on the other hand we had spent some very pleasant time in the Kames Hotel!
Posted by Douglas Wilcox at 9:52 pm No comments: