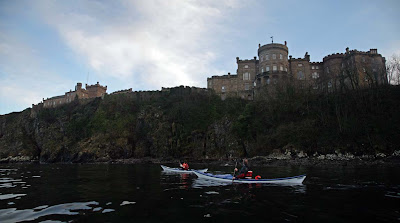 I have mentioned this before, but a particular pleasure of Scottish paddling is seeing her great maritime castles from a new perspective. The romantic cliff top Culzean Castle was built between 1777 and 1792 by Robert Adam for David Kennedy, 10th Earl of Cassillis. It is built round the original keep walls and the famous oval staircase occupies almost all of the interior of the keep.

The top floor of the round tower forms part of the Eisenhower Suite. This was gifted to General Eisenhower by the Scottish people after WW2. He visited the suite 4 times. 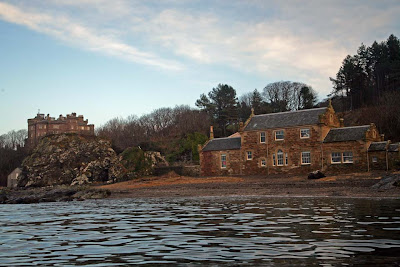 Culzean estate is literally littered with interesting buildings. This is the Dolphin House which was originally the castle laundry. It is built right on the high water mark, on a raised beach at the foot of a cliff. It is now an outdoor education centre. 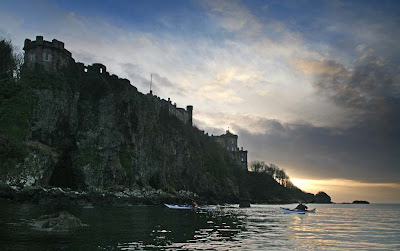 This is the Gazebo, which is perched at the north east end of the cliffs. Like many buildings at Culzean, such as the Ruined Arch at the main entrance, it was built as a ruin. 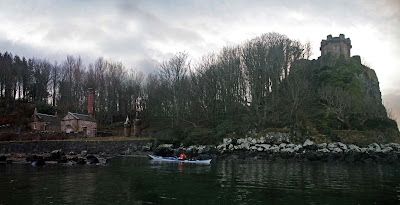 Not all the buildings were decorative. Below the Gazebo lies the gas house. Coal gas (or town gas) was discovered by William Murdoch a prolific Scottish inventor, chemist and engineer. Murdoch was born in Ayrshire, not very far from Culzean. The gas house at Culzean was the first in Scotland and lit the castle until 1940. Coal was brought in to the little jetty below the gas house and, even today, you can still find occasional pieces of coal at low tide. Another Scottish inventor, "Tar" John McAdam, invented metalled roads and laid the first stretch of tarmac on the Carrick Hills just north of Culzean.
Posted by Douglas Wilcox at 10:39 pm 2 comments: