Wilderness lost and found in Arisaig. 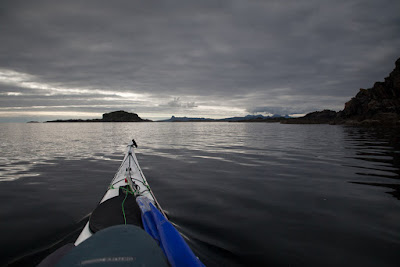 We journeyed west along the north coast of the Sound of Arisaig towards... 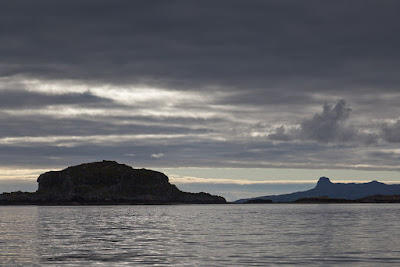 ...Eilean a' Ghaill, from which we had set off on our crossing of the Sound, just the previous day. However, as is often the case on trips with such intense experiences as this one, it felt more like a week ago! We had intended camping at Port nam Murrach further up the coast but when we got there my heart sank when I saw a large party of kayaks in the bay complete with tents and a tipi on the machair.

Some were still afloat and I had a very pleasant chat with Mike, their experienced kayak tour guide from Wilderness Scotland. However, it no longer looked like the wilderness and I didn't fancy adding our tents to this burgeoning tented village. Wilderness Scotland are very responsible and leave the wild camp sites spotless but they do use the Sound of Arisaig wild campsites very heavily during the summer. The Land Reform Act Scotland allows wild camping but I can't help thinking that regular, commercial trips of this size (which target the same small number of honey pot sites) are not in the spirit of the Scottish Outdoor Access Code, which states: "Wild camping is lightweight, done in small numbers and only for two or three nights in any one place". 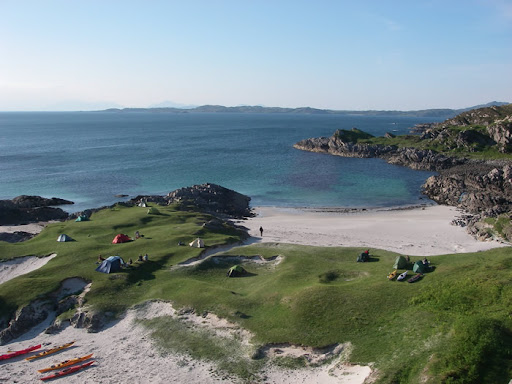 This is a photo from one of Wilderness Scotland's partner companies, Rockhopper. It is the wild camp site in Moidart, which we had used the night before. It shows 10 small tents and a large group tent. Wilderness Scotland say in their downloadable brochure "In order to minimise our impact, you will be asked to share a tent with another expedition member of the same sex".  That's very laudable but it makes a lot of people on a fragile spot. There will be even more next year. This year, Wilderness Scotland offered 3 five night wild camping kayak trips in the Sound of Arisaig area. In 2012 they are increasing this to 4 trips. One of the problems is that the experience level of their clients means that they only paddle about 12km per day so that means their trip is condensed into a small area and they use all of the decent camp sites in the area during the trip. Most camping sea kayakers will move about 30km between camp sites and on this day I covered about 50km. 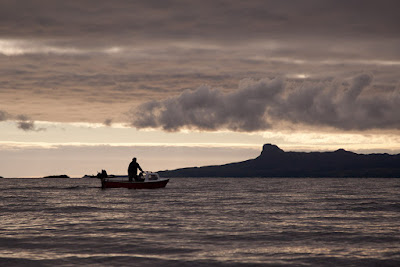 We had a choice, either return to Eilean a' Ghaill or carry on back to Arisaig. The Arisaig option had some attractions. Although it was still over 10km away (round the skerries) it was nearly high tide and I could shave about 3km off that. I could paddle straight through the skerries and the tidal channel inside Eilean Ighe at the mouth of Loch Nan Ceall.  Another advantage was we would arrive about high water at 8:30pm, which would make recovery of the boats very easy as our cars, and Donald's static tent, were only about 25 meters from the HW mark. Decision made, Donald produced some snack bars to fuel the remainder of my 12.5 hour paddling day, then we were off, with the setting sun warming the clouds behind the Sgurr of Eigg.

We entered the South Channel of Loch nan Ceall together and marvelled at the back drop of the Skye Cuillin mountains beyond. Donald then kept to the main channel while I... 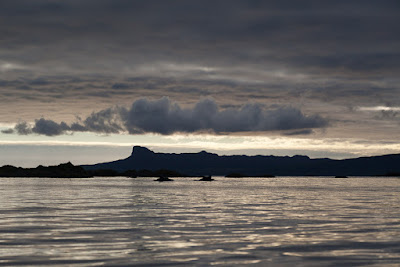 ...slid through the skerries. The putter of his outboard soon died away and I was left in peace in this amazing place. The boats and the people gathering "spoot" shells had all gone. The sea birds were roosting for the night and even the seals had all slid off the rocks and were out of sight. Apart from the drip from my paddle blades and an occasional pip from an oyster catcher the world of the skerries was silent. I was now glad we had not set up camp on Port nan Murrach. I love paddling on my own in the evening. 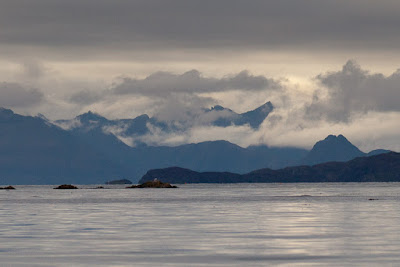 As our journey neared its end, the evening mists curled round the jagged peaks of the Cuillin and I felt I had found the Wilderness again.
Posted by Douglas Wilcox at 2:48 pm 9 comments: