Making light work of a huge volume of melt and a small volume of malt. 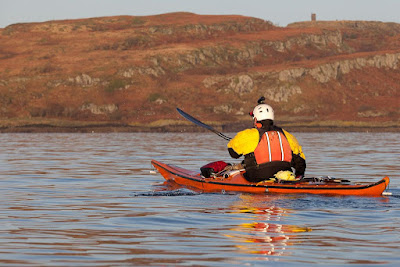 It did not take long to reach the Little (Wee) Cumbrae from Portencross. One of the first Scottish light beacons to warn shipping is situated on the summit of the island. It is a simple round tower, 8.5m high, which... 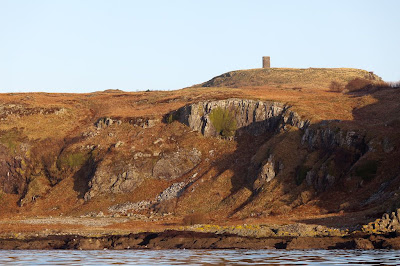 ... was built by James Ewing in 1757. An open coal brazier was situated at its top and served as the source of light. It proved to be a profitable business as there was a tax on every ship, which passed on the way up the Clyde to Port Glasgow and Greenock. However, it was often obscured by low cloud and it had a voracious appetite for coal. The coal came from near Glasgow and was transported by horse and cart for 45km over the hills to Irvine in Ayrshire before being transferred to a boat for the Wee Cumbrae. It was then hauled another kilometer up to the 123m high summit. It was not exactly light work... 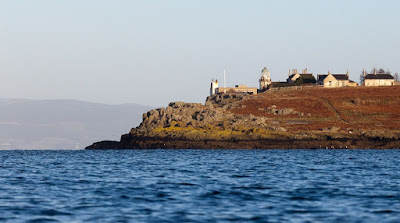 ...so it was replaced in 1793 by this lighthouse (with oil lamps and reflectors) on a raised beach on the west coast of the island. From here we now crossed the main Firth of Clyde shipping channel...

...to the Island of Bute. Our arrival was marked by the modern Rubh' an Eun automated solar powered light.

We hadn't bothered watching the GPS as we thought we were crossing the channel at slack, low water. However, looking at our tracks later, we discovered we had been carried 0.7km down tide, before we started correcting. The ebb had lasted longer than expected, because of the huge volume of  melt water from the recent snow coming down the Clyde. This happened after a dramatic thaw, which saw a 22 degree Celsius temperature range in less than 24 hours.  The Clyde river levels at Daldowie gauge were 10 times higher than base levels!

We landed at Port Leithne for first luncheon. Jim, Phil, Tony and I had come equipped with fine Scottish fare.. we had each brought a different malt whisky. We were somewhat bemused to discover that our four friends from the Castle Craigs Canoe Club had brought none! That's one of the problems with paddling in a regular group, you begin to think that the way you do things is normal. One of the advantages in paddling with a new group is having your preconceptions about what is normal behaviour exposed for what they are.

Well, all I can say to our new friends from CCCC is "Fancy thinking that coming out seakayaking without a dram of malt is normal!" :o)
Posted by Douglas Wilcox at 8:58 am No comments: