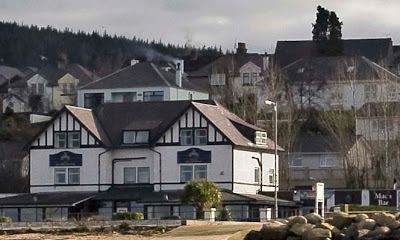 We emerged from the sea at the top of the slipway and blinked in Brodick's late winter afternoon sunlight. We were both seriously drouthy but, to our delight, we discovered that the slipway was truly conveniently located. We spied Mac's Bar, an unassuming 70's appendage to one of Brodicks waterfront hotels. 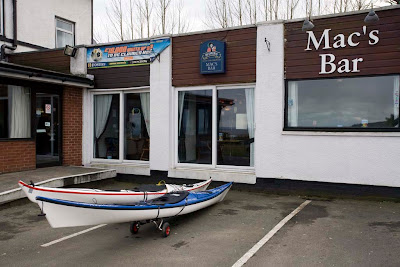 The convenient parking for kayaks caught the reviewer's eye. 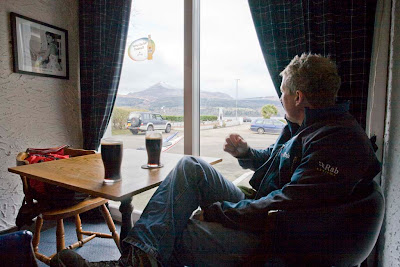 If one reads the TripAdvisor review for this bar and its attached hotel one might choose to pass by.

"Not only is the hotel a complete disgrace, it boasts its very own working mens club also known as Macs Bar."

"On going to Mac's Bar, it was full of what appeared to be workmen who obviously only know how to converse in the vernacular."

"The first round of drinks I got was a joke, there were no half pint glasses."

Well with a name like Mac's Bar, Tony and I were certainly not expecting the Ritz cocktail lounge, with free paper umbrellas in sugary drinks. Tony and I are (edukatit) working men. We speak the vernacular. Neither of us even knew you get half pint glasses, certainly not in a bar!! We were thirsty. We went in.

The barman was a mature gentleman with a quick eye. He had spotted us paddling across the bay and he must have identified us as Guinness drinkers from afar. I swear he started pouring the the first pint of ice cold Guinness before we had even got to the bar. He courteously asked where we had paddled from and by the time the pints were poured he had said he hoped we had enjoyed our visit to Arran.

Sitting by the window, Tony enjoyed a view of Goatfell and I had a view of the bay, with the heavy responsibility of alerting Tony when our boat came in.

The Guinness (in pint glasses) was excellent.

Well despite the Tripadvisor reviews, we can thoroughly recommend Mac's Bar (and slipway). 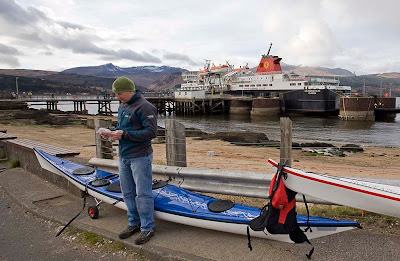 Leaving the bar, we eventually found our way to the MV Caledonian Isles using a map Tony had sketched on the back of a napkin. No longer thirsty, we were now looking forward to Calmac's acclaimed chicken curry, rice AND chips on the crossing back to Ardrossan.

I am very sorry if you have visited this blog with the expectation of reading about great circumnavigations or huge open crossings. Tony and I neither had the inclination to circumnavigate Arran nor to paddle back to Ardrossan. That's what ferries are for!