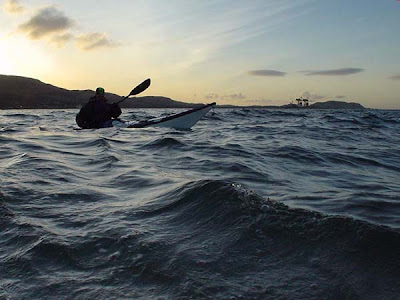 In my post about winter paddling at Ayr yesterday, Squidink asked about the water temperature. By coincidence, Grazie who publishes Skoogle recently posted an index link to a post I made on the Sea section of the UK Rivers Guidebook forum last winter. I take the liberty of reposting here as cold water is probably the greatest threat to the safety of any sea kayaker.

A chilling winter warning.
December 2005. Regular readers of this forum will know of my concern for falling into cold water. I personally use a dry suit with pile/pertex underneath in winter if it is rough or a two piece bib with dry feet and a cag with latex wrist seals and a sealable neck in more moderate conditions. Under the two piece I use polartec aquashell garements which are made of micro fleece bonded to a breathable waterproof membrane equivalent to but much more comfortable than 3mm neoprene. I have practised falling in during winter and both of the above work.

However, I got a very bad shock last Saturday (at the end of December). My brother Donald did a lot of kayaking in the late 60's early 70's but had stopped until September when I took him out in my Alaw at Arisaig in September. He has had several major life events recently and he enjoyed the escape of kayaking so much he gave up smoking! I hadn't seen him since then till last weekend but he phoned very keen to go out again. The Accuweather upper Clyde sailing forecast was for a 6 mph northerly dropping to 3mph. The BBC forecast was for sun and 7 mph northerly winds.

I decided to go to Largs and take him across to the Cumbrae. I thought if the weather changed he could always get the ferry back. I decided not to bring my regular paddling partners Jennifer or Mike along as I wanted to be able to concentrate on Donald. We arrived at Largs in a flat calm just as the sun was coming up. We met Billy an experienced kayaker who was down to test his new paddle. We decided to head across to the Cumbrae ferry terminal. 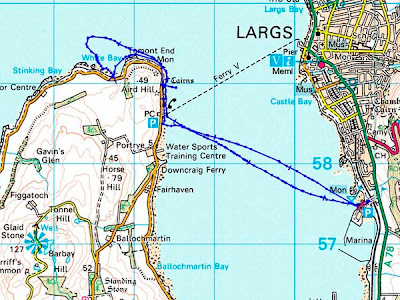 I was very surprised how much weight Donald had put on since stopping smoking. I wished I had brought the Quest for him rather than the Alaw which had been a good fit in September. But we removed the hip shims, got the footplate right to the front and got him squeezed in and showed him how to release the nylon spraydeck.

The Alaw was now too small for him. We should not have gone.

I had brought him a Yak salopette with velcro neoprene ankle seals and a Yak cag with velcro neoprene seals at wrists and neck. I had also brought my 3 mm neoprene shorty wetsuit and thermals for underneath but the wetsuit was far too small for him. He ended up with two Helly Hansen long johns, 1 Helly Hansen top with a micro fleece and a normal fleece under the Yak gear. I finished him off with Chota neoprene knee length boots, neoprene gloves and a neoprene cap. He complained he was too hot!

We were soon paddling over a glassy sea but a dark line on the horizon soon changed everything and we had a force 4 NW wind channelling straight down the Kyles of Bute meeting a spring flood tide. 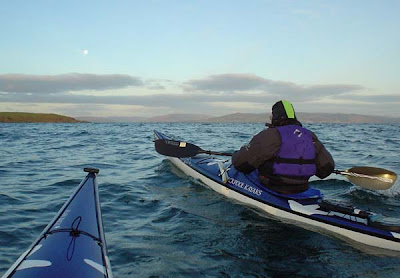 Donald was really enjoying himself but I asked him if he would like to turn back. He definitely didn't!

SECOND MISTAKE
I should have turned back straight away as the weather was now out with his recent experience. As I have been sailing, windsurfing and kayaking at Largs since 1967, I had little excuse for not appreciating how local winds funnel and accelerate down through valleys in the hills and between the islands.

We were soon in the calm of the lee of Cumbrae and were enjoying a cup of hot soup. We were planning what to do next. I suggested heading south in the shelter of Cumbrae but the wind further out had now definitely dropped and Donald had caught a glimpse of the hills of Arran behind Cumbrae and fancied a quick look round the north of the island to get some photos.

Billy and I let him lead the way and told him we would turn back as soon as he felt uncomfortable. As we rounded the point, the wind was continuing to drop so we continued round. 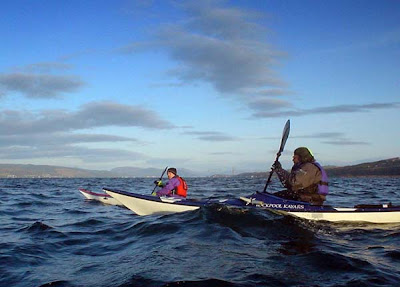 We headed out from shore a bit to get the best view over to Arran. Unfortunately we had not gone much further when another dark squall line appeared on the horizon. This time we all decided to turn for the shore at the same time. But it was soon on us blowing about 4 to 5 and the seas built up very quickly. Donald found the following sea much more difficult and I saw him do a couple of successful low braces. I wondered if I should raft up with him.

THIRD MISTAKE. As soon as I saw him brace I should have rafted. As we approached the shore the waves steepened, he broached and fell in 190 metres from the shore. 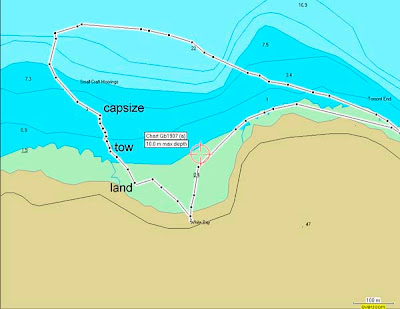 He was disorientated and had the cold water gasp reflex but I was right beside him and got him to hang onto my bow. I got his boat emptied in seconds while Billy calmed him down. We then got him in between his boat and mine facing towards his bow. He was getting very cold and he was moving very clumsily. I have practiced getting big people into boats before and found the best way is between the hulls, arms over both boats, feet into cockpit and limbo forward. Donald got his legs into the cockpit but even with Billy and me on either side, he couldn't get his bum on the seat (a combination of being uncoordinated, weak and the seat back folding forward under his bum as the elastic was too stretchy).

A breaking wave washed over us and he was in again, looking even colder. I could see he was now mentally slowing down, his speech and movements were becoming uncoordinated. I looked at the shore it was just over 100m away. I shouted to Donald to grab the back of my boat (he had no strength left to get on the back deck of the boat) and shouted to Billy to keep an eye on him in case he couldn't hold on. I then paddled hard for the shore. The GPS data shows that it was only 7 minutes from the fall in to the shore.

He could hardly stand and the freezing north wind was blowing up the beach with no shelter and making him more hypothermic by the second (he had lost his neoprene ca)p. Now at last, some of the planning began to go right. I got him into my Vango emergency shelter. Billy and I got his wet clothes off and he put on the Buffalo pile and pertex jacket and trousers I always carry for such a situation. He then put the Yak suit and boots back on top together with a spare Lowe Alpine cap (fleece and pertex). With three of us in the shelter and three flasks of hot soup down our necks we soon had a warm fug but it was over half an hour before he got warm again.

Once he was warm enough he walked round the point to a sheltered bay on the east of the island and I towed his boat round. In the sun and shelter we had lunch washed down with more hot soup (we had 6 flasks between the 3 of us). 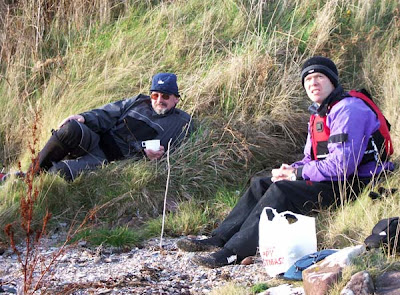 Donald (on the left) was soon back to form and even wanted to paddle back to Largs. We did have another spare change of clothing but he sensibly decided to take the ferry back and I towed his boat back to Largs.

What if we hadn't been near the shore? We would have to have used a scoop rescue (we had two hand pumps and a portable electric pump between us to empty the boat after this) but even with 2 experienced kayakers, we might have found it difficult to get him into the cockpit. Once he was in, one of us would then have needed to raft up with Donald while the other towed. (We have practiced this.)

What if we had not been able to self rescue? Well I had VHF, flares and EPIRB and Largs RNLI Inshore Rescue Boat station was only 2.6km away. But Billy and I (we are both doctors) were amazed at how quickly Donald developed symptoms of hypothermia (and he has much more natural insulation than a thin person). He could have been seriously hypothermic by the time outside help arrived.

Billy who was not any better dressed than Donald has now ordered polartec aquashell wear for under his cag and salopettes. The water in the Clyde is currently 11 degrees C and deep water off the West coast never gets warmer than 13 degrees even at the end of summer. In Spring it could have been even worse. The temperature in the West coast Scottish sea lochs is then only 6.5 degrees C even although the sun and air temp might tempt you to paddle in shirt sleeves.

In conclusion, learn from my three main mistakes above. Although we had a satisfactory outcome, prevention is always better than cure. Anticipate problems rather than react to them. Know that cold water is a killer.

It has not put Donald off sea kayaking but next time he will be in a dry suit, in a Quest and in a nice sheltered loch!