Crossing the bows of Dauntless

As we left the shelter of Little Cumbrae, we were hit by a light, but chill, wind from the NE. It blew down off the snow covered slopes of Ben Lomond, which was some 57km distant. On the sea horizon I spotted a light grey tower, "Strange", I thought, "I don't remember a buoy there."

We then passed a marker buoy for a wreck, 1km SW of the lighthouse. It was dancing in the current and making impressive gurgling noises. Again I was surprised, it was only 90 minutes after neap high water and even the maximum the spring ebb is only 1 to 1.5 knots. The dark brown colour of the water gave it away. This was all the flood water from the recent rains, making its way to the open sea.

I stopped paddling and the drift speed was just over 2 knots. We were going to have an interesting crossing. We set off on a very high ferry angle and half way across it looked like we would be swept south of our destination, Garroch Head on Bute. 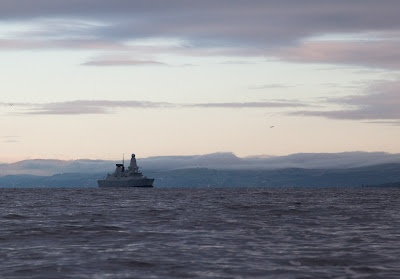 The mystery of the grey tower soon revealed itself. It turned out to be HMS Dauntless. At first she was heading straight for us (we were in the middle of the Firth of Clyde Channel) and we had to calculate whether to maintain our high ferry angle and cross the channel more slowly or head straight across the channel more quickly and risk being swept down tide of Garroch Head. Not wishing to get in the way of Dauntless, we headed straight across the channel, until we saw her starboard side. In a test of her Samson radar (in the dome on top of her tower) it apparently managed to simultaneously track all aircraft flying into and out of Heathrow, Gatwick, Stanstead, Paris CDG, Schiphol and Berlin. Despite this processing power, we thought five kayaks might just be under her radar, so we were rather pleased to clear her bows. 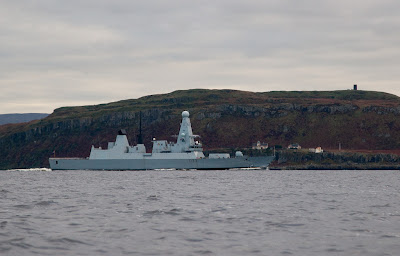 HMS Dauntless, D33, is a type 45 destroyer. She was built on the Clyde at Scotstoun where she has been recently fitting out. This was her maiden voyage to the Naval dockyard at Portsmouth. 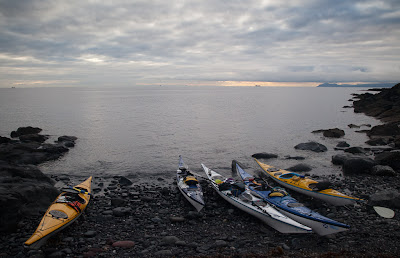 After crossing in front of Dauntless's bows we then had to paddle very hard indeed to keep out of the Garroch Head tide race. On taking a breather we saw from the left: Cameron (a mooring vessel), Svitzer Mercia (a tug) and Dauntless all leaving the Clyde and Bellatrix (bulk carrier) waiting to enter the channel. There were also a couple of small fishing boats. 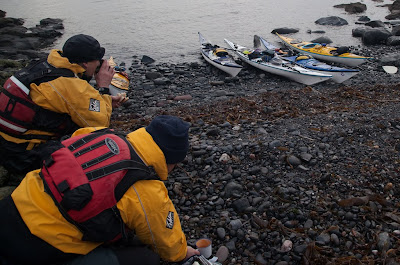 We were pleased to have got safely across the channel and enjoyed our second breakfast on the beach at Port Leithne on Garroch Head.
Posted by Douglas Wilcox at 8:49 pm No comments: