Wreck of the Schooner Monreith 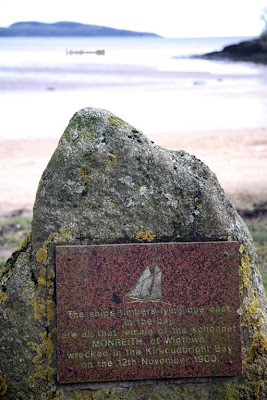 There are no harbours accessible at all states of the tide on the whole stretch of the Scottish Solway coast from Gretna in the East to the Mull of Galloway in the west. Following the many indentations of the coast, this is a distance of over 270km. Danger to ships is confounded by the large tidal range of nearly 10m at springs and the extensive sand and mud banks which are exposed at low tide. The whole coast is exposed to southerly winds and swells and if ships were caught out by a storm at low tide they had to try and find shelter at the entrances to the firths. Only when the tide was high could they make their way up the river channels to the shelter of the wharves in such towns as Kirkcudbright. 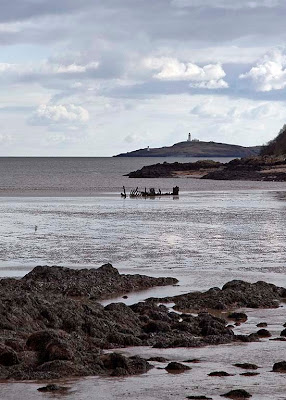 On the 12th November 1900, the two masted sailing schooner Monreith, from the Galloway port of Wigton, was carrying a load of granite kerb stones from Newcastle in County Down, Northern Ireland to Silloth in England. A storm blew up and she attempted to take shelter in the mouth of Kirkudbright Bay (behind Little Ross Island, the island with the lighthouse on the horizon.) The bay was not yet deep enough and grounded and was driven onto the sand banks of Goat Well Bay where her timbers were pounded by the surf until she sank. Her crew were able to launch a boat in her lee and made their way safely ashore just as the Kirkcudbright lifeboat arrived. Monreith's sturdy timbers can still be seen reflecting in the wet sands at low tide. 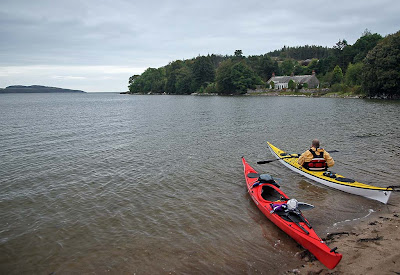 If you launch or land at Dhoon Bay near high water, you will miss this part of the Bay's history.

Goat Well Bay, Nun Mill Bay and Dhoon Bay are pretty much synonymous. Although not used on the map, Dhoon Bay is the current local name.