A St Kilda tale of a bell and a spirit of generosity. 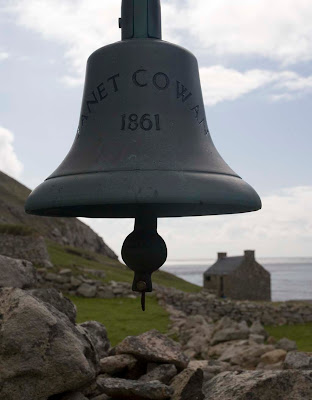 This brass bell hangs on a wooden frame by the church door. Although it is dated 1861 it is actually a replica of the original bell which was used to call the St Kildans to worship. This new bell was cast in Greenock for the rededication of the church which took place in 1980. 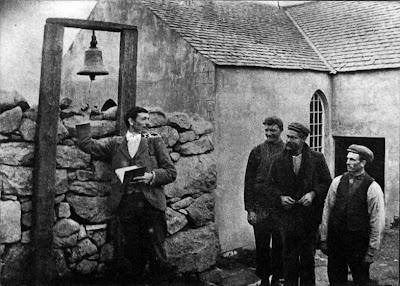 This photo, which is part of a display in the schoolroom, dates from post 1900. The bell hung outside the church from 1864 until 1930, when the island was evacuated. The original disappeared some time after this. It had been the ship's bell of the SS Janet Cowan, which had been built in Quebec in 1861. She was wrecked in Village Bay on 7th April 1864. She had been en route from Calcutta with a cargo for the jute mills of Dundee on the east coast of Scotland.

The St Kildan's were at the end of their winter and would have had little food to spare. Despite this, they fed and sheltered Captain MacKirdy and his crew for a week. When the weather improved the wrecked sailors then borrowed a boat from the villagers and set sail for Harris, where they left it in West Loch Tarbert. Eventually they made their way back to their home port of Greenock. The grateful captain and crew collected nine pounds which they sent to the selfless villagers. The ship's owners paid for the village boat to be returned to St Kilda, together with a cargo of flour and grain.

One of the St Kildan ministers lasted less than a year (Lachlan MacLean, 1903). I wonder if it was this gentleman? He doesn't really seem to have captured the enthusiasm of the St Kildans!